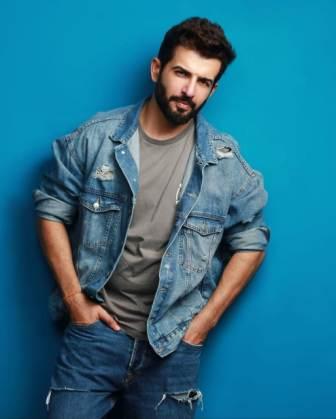 Jay Bhanushali is an Indian television actor, dancer, and anchor best known for his role as Neve Shergill in Ekta Kapoor’s serial Kayamath. Which was aired on the Star Plus TV channel. Currently, he is making a lot of headlines by joining Bigg Boss 15 as a contestant. Jay was born on 25 December 1984 in Ahmedabad, Gujarat.

Although his family shifted to Mumbai long back where Jay did his schooling at B.P.M High School in Mumbai. Continuing his studies after passing the high school and intermediate examination, he earned his graduate degree from a college in Mumbai. He was fond of playing cricket since childhood and wanted to become a cricketer at the beginning of his career but his wish could not be fulfilled.

After a few days of cricket training and playing practice matches, he realized that he was not made for cricket. Due to not being able to do anything in cricket, he got frustrated and he could not understand in which field he should pursue his career. Then his elder sister Hetal Bhanushali advised him to try his luck in modeling.

After this, he prepared a portfolio by taking some money from his father. After giving a few auditions, Jay finally got work and got an opportunity to appear in some TV commercials early in his career. He then featured in ads for companies like Rediffmail[dot]com, Pepsi, Lays, and Motorola.

The biggest break in his career came when he was selected for the lead role of Neev Shergill in Ekta Kapoor’s serial Kayamath. He made a place in the hearts of the TV audience by playing his role in this serial of Star Plus with great enthusiasm and got accolades. Jay Bhanushali was highly appreciated by the critics for his role and won many awards for his stellar performance in the show.

He won the Indian Telly Award in the category Fresh New Face – Male and the Indian Telly Award in the category of Best Actor in a Supporting Role. In the year 2007, he joined as a contestant in Jhalak Dikhhla Jaa 2 where he was the 2nd runner-up of the show. In 2008 he joined the TV show Kaun Jitega Bollywood Ka Ticket as a contestant where he finished 6th.

In 2009, he took a wild card entry in the television show Jungle Se Mujhe Bachao where he was eliminated on the 60th day of the show. In the same year 2009, he played the role of Yuraj in the serial Kis Desh Mein Hai Meraa Dil. In the years 2009 and 2010, Jay Bhanushali hosted Dance India Dance Season 1, Dance India Dance Season 2, and Meethi Choori No 1 where he won the judges and audience applause with his brilliant comic timing, hosting skills, and anchoring skills.

Jay Bhanushali has also played many main and important characters in TV serials. He played the character of Yash Malhotra in the serial Geet- Hui Sabse Parayi which aired in 2010 and then he played the character of Anuj Ashok Srivastava in the serial Kairi- Rishta Khatta Meetha which aired in the year 2012. Apart from this, he has also been involved in many TV shows as a contestant.

Jay participated in the dance reality show Nach Baliye 5 telecasted in the year 2012 along with his wife Mahhi Vij. In this show, he won the title of the show while showcasing his tremendous dance skills. After this Jay participated in the television shows Nach Baliye, Shriman V/S Shrimati (2013), Khatron Ke Khiladi 7 (2016), Kitchen Champion 5 (2019), Khatron Ke Khiladi, and Made in India (2020) as a contestant.

Apart from this, Jay Bhanushali has also been a part of Bollywood films. He made his Bollywood debut in the year 2014 by playing the lead character of Akshay Bedi in the Bollywood romantic thriller film Hate Story 2. In this film, Jay gave many intimate scenes with the film’s actress Suvrin Chawla. His wife Mahhi Vij had objected to the internal scene given by him in the film and there was a slight rift in their relationship.

In the same year 2014 itself, he played the lead character of Gyani in another Bollywood film Desi Kattey. His performance in films was superb, which gave him an opportunity to play the lead character of Karan in another Bollywood film Ek Paheli Leela. He was seen opposite actress Sunny Leone in this film. Jay Bhanushali entered the world of web series in the year 2019 with Zee5’s web series Parchayee.

Jay Bhanushali’s age is 37 years old in the year 2022. He is a model and TV actor who is also known for his fitness. Jay is known for his rigorous training in the gym. He has also been doing weight training for more than 15 years. He revealed in an interview that he is now working in calisthenics. Let us tell you that calisthenics is a form of exercise that is usually done without any equipment.

He told that by doing calisthenics he got great results. Apart from the headstand, he is also doing a handstand and human flag. By doing this the results are very positive and most of the day he feels very light. He told that usually when he is working on a new project, he has to change his routine, work hard and also have to fix the right time for taking food.

But no one can maintain this thing throughout the year. He says that being an actor, he does not pay much attention to fitness in his outdoor schedule. Therefore, when he is away from home, he ensures some facilities for himself. Before staying in a hotel, he must make sure that the hotel where he is staying has a good restaurant so that he can have healthy food.

Also, if the gym closes early, he tries to get it checked by asking the people of his production whether it can be kept open so that I can work out properly. Apart from this, he sleeps well after getting tired so that he can feel refreshed the next morning. Jay’s daily fitness routine is 90 minutes in which he does 30 minutes of cardio, 15 minutes of core exercises, and body training exercises.

If time is spare, he also does calisthenics in the evening. In order to maintain a fit body, apart from hard training in the gym, it is also necessary to follow a proper diet routine. Jay takes carbohydrates, proteins, and fats in the same quantity in his diet. Apart from this, he also likes to eat fresh fruits and drink juices.

Jay Bhanushali’s height is 5 feet 8 inches, which is equal to 173 centimeters. His body weight is about 65 kg, he takes a proper diet to keep his body fit so that his body measurement is 38-32-15. His eye color is Dark Brown, and his hair color is also Black.

That’s why Jay and his brothers started doing part-time jobs after 10th at the behest of their father. He sold books during his job, and also worked as a salesman for some shoe brands. Jay Bhanushali’s mother’s name is Anu Bhanushali. Apart from his parents, an elder sister Hetal Bhanushali and his brother live in Jay’s house.

Talking about Bhanushali’s marital status, he is married and he is also the father of a daughter. Jay Bhanushali’s wife’s name is Mahhi Vij, who is a television actress and she is 2 years elder than Jay. Jay and Mahhi met on the sets of a show which made them good friends. After that both started dating each other and friendship turned into love.

Later Jay and Mahhi decided to get married in the year 2011 and finally got married on 11 November 2011. After this Mahhi gave birth to a daughter and Jay became a father. Both have lovingly named their daughter Tara Jay Bhanushali. Before becoming parents, Jay and Mahhi took up the responsibility of someone else’s son Rajveer and daughter Khushi and raised them like their own children at home. Both had cleared his stance about their kids, they said, they never adopted any kids.

These two children are still a part of Jay and Mahhi’s family and they still love them as their own children. Recently, during the Covid 19 lockdown, Mahhi had pressurized Jay to have his second child. She had also appealed to his fans on social media to comment on Jay’s account and ask for another child.

Talking about the total net worth of Jay Bhanushali, his total net worth is around ₹10 crores – ₹12 crores. His primary source of earning is from acting as a professional actor in the Indian entertainment industry. He earns well on the basis of acting and hosting in TV serials. He charges around ₹1 lakh per episode.

In the year 2021, Jay Bhanushali has been seen as a contestant in Bigg Boss 15 where he was the highest fee-charging contestant. In Bigg Boss 15, he was being given around ₹11 lakh per week as a fee. Today he is the owner of lakhs of properties on the basis of his acting, who also have a good collection of cars and bikes. He has a BMW car from which he is often seen roaming around.

He has more than 150k followers till now on his Twitter account where he shares his thoughts through tweets. In the table below, we have shared the links of all their social media profiles with you, by clicking on which you will be able to access their profile page directly.

Some Interesting Facts About Jay Bhanushali:

See, we do so many wrong things in life, so this saves us the guilt of one sin. By being a vegetarian, you are saving the environment. There’s a lot of heat in meat so when you don’t consume it, automatically your skin clears up. Also, it has proteins that are good for you to know…XYZ.”

Que. Who is Jay Bhanushali’s wife?

Ans. Mahhi Vij is an actress who is the wife of Jay Bhansuhali.

Que. Are Jay and Mahi still together?

Ans. Yes, Jay and Mahhi are still together. Both are husband-wife and live happily together with their children.

Que. Is Jay Bhanushali is Gujarati?

Ans. Yes, according to his birthplace, he is Gujarati. He was born in Ahmedabad, Gujarat, India.

Que. How is Khushi Ray related to Jay Bhanushali?

Ans. Khusi Ray is an adopted child of Jay Bhanushali. Jay and Mahhi Vij get married in 2011. In 2017, Mahhi and Jay decided to adopt their house helper children, Khusi Ray and Rajveer Ray.

This is the full details on Jay Bhanushali Wife, Biography, Wiki, Age, Kids, Daughter, Parents, Net Worth & More. Share this post with your friends and keep visiting us on celebwale.com for famous personalities and trending people’s biography with updated details. If you have any thoughts, experiences, or suggestions regarding this post or our website. you can feel free to share your thought with us.