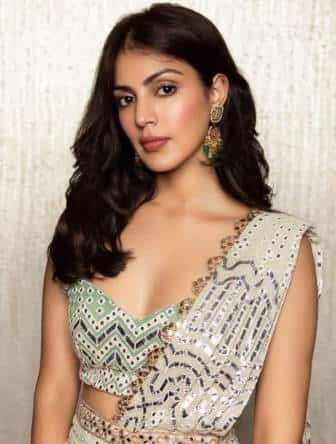 Rhea Chakraborty is an Indian film actress best known for working in Hindi films. She was in discussions about being in a relationship with the late Bollywood actor Sushant Singh Rajput. She was born on 1 May 1992 in Bangalore, Karnataka. His father was in the Indian Army, due to which she was brought up in different cities of the country.

She had his early education at Army Public School, Ambala Cantt, Punjab. After that she did graduation. With the dream of becoming an actress since childhood, she came to Mumbai where she participated in MTV India’s show TVS Scooty Teen Diva as a contestant in the year 2009.

Impressing everyone with her performance in the show, she was the runner-up. After that, she auditioned for MTV Delhi for VJ and she got selected. She has hosted many MTV shows in her career. Apart from this, she has also hosted shows like Pepsi MTV Wassup, TicTac College Beat, and MTV Gone in 60 Seconds.

Rhea made her film debut in the 2012 Telugu film Tuneega Tuneega with the role of Nidhi. After that, she made her Bollywood debut in 2013 with the role of Jasleen in the Hindi movie Mere Dad Ki Maruti. In 2014, she appeared in the Bollywood movie Sonali Cable in the lead role of Sonali.

She is still away from films. Rhea founded Vividrage Rhealityx, an artificial intelligence company, in September 2019 in partnership with her boyfriend Sushant Singh Rajput, and her younger brother Showik Chakraborty.

So, she was in the news for a long time. Rhea is accused of forcing Sushant to take drugs and teaching him to consume the drug. All these things are being investigated by the Narcotics Control Bureau (NCB).

In the initial investigation, NCB found that Rhea used to consume drugs earlier and also supplied drugs to others. Rhea had to stay in NCB’s custody for about 2 months because of all this.

According to Rhea’s acting and modeling career, she is very conscious about her fitness. She does yoga and also eats healthy food, her look is very attractive and beautiful from yoga and fitness.

Her eye color is dark brown and her hair color is black. She has also appeared on the cover pages of many magazines due to her attractive look. Rhea loves non-veg and seafood.

Rhea was born in Bangalore, Karnataka to a Bengali Hindu family. His entire family follows Hinduism and worships Hindu Gods. Rhea Chakraborty’s father’s name is Indrajit Chakraborty and he is a retired army. His mother’s name is Sandhya Chakraborty. She also has a younger brother named Showik Chakraborty.

Her marital status is still unmarried. Rhea’s boyfriend was the late actor Sushant Singh Rajput. She had given her life by committing suicide. Rhea started dating Sushant in April 2019. Both had a plan they’ll get married soon. But Sushant’s accidental murder surprised everyone and made him stand in the dock for charges.

According to media reports, Rhea was already in the habit of taking drugs due to which Sushant also started taking drugs. After that, there was a rift between Rhea and Sushant. On 14 June 2020, Sushant Singh Rajput committed suicide at his apartment located in Bandra, Mumbai, during the COVID lockdown.

Sushant’s family filed an FIR against her in Bihar, due to which she had to remain in jail for a month. She has just come out on bail but her brother Showik Chakraborty is still in jail on drug charges.

Rhea Chakraborty’s total net worth can be up to ₹ 11 crores. She mainly works as a heroine in Bollywood movies. Although all the films that she has worked in so far, they have not been able to do anything amazing at the box office. She may not have been a hit in films but she earns lakhs of rupees a month from her other projects.

Rhea earns around ₹3 lakh a month and around ₹35 lakh a year. Apart from films, he earns through brands endorsement and stage shows. He owns a flat in Mumbai worth ₹85 lakh. Apart from this, he also owns a Jeep Compass SUV worth ₹23 lakh and a Toyota Innova worth ₹20 lakh.

Some Interesting Facts About Rhea Chakraborty:

This is the latest information on Rhea Chakraborty (Actress) Biography, Age, Height, Father, Husband, Net Worth & More. Please share this post with your friends and keep visiting us on celebwale.com for famous personalities and trending people’s biography with updated details. If you have any thoughts, experiences, or suggestions regarding this post or our website. you can feel free to share your thought with us.