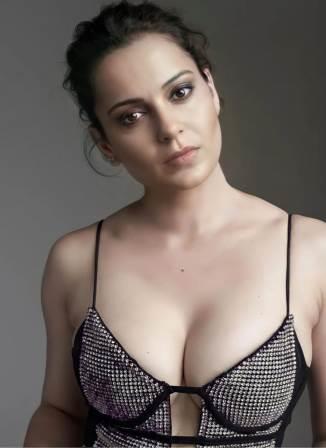 Kangana Ranaut was born on 23rd March 1987 in Bhambla, Mandi district, Himachal Pradesh. She belongs to a Rajput family. Her father, Amardeep Ranaut is a contractor & businessman and her mother, Asha Ranaut, is a teacher by profession. She has an elder sister named Rangoli who works as a manager and a younger brother named Akshat Ranaut. His grandfather, Sarju Singh, was an active member of the Legislative Assembly as well as an Indian Administrative Service Manager.

Kangana Ranaut is a well-known Indian actress who works in Bollywood as well as Tollywood also. She is one of the top paid actresses across the country. Kangana gets charged around 10 crores to 12 crores per film. She has appeared 5 times on India’s Forbes Celebrity list. She was born in India’s most beautiful region of Himachal Pradesh. It was very beautiful from childhood, as beautiful as it looked, as sharp and stubborn in nature. Her mind was very sharp since childhood, but her studies were not lucky, due to which her father was very angry.

She got her initial education from DAV School, Chandigarh. In childhood, Kangana was very clever in their studies, so their family had a desire to become a doctor, due to which there was more pressure on them to study, but she has failed in a subject in class 12 and did not want to study further.

Kangana Ranaut’s age is 36 years old in the year 2022. She is one of the main actresses in the Bollywood film industry who is known for her fitness. Kangana always looks very fit and slim. She always takes a healthy diet to keep herself fit. She does not like to eat oily and fried things. They believe that eating more fried roast not only increases fat in the body but also damages many parts of the body. She revealed in an interview that she starts her morning by eating porridge.

Oatmeal rich in fiber prevents the increase of sugar and cholesterol. She likes to eat porridge in the morning. Kangana prefers to eat fresh fruits as a mid-day snack. Along with this, a protein shake is also taken to meet the lack of protein in the body. At lunch, Kangana likes to eat rice, lentils, roti, salad, and boiled vegetables. Apart from this, she sweats a lot in the gym. She exercises 5 days a week. She does 45 minutes of yoga and 10 minutes of meditation every day to calm the mind. If ever she does not feel like doing yoga, then she dances.

Kangana was born in a prosperous Hindu family. His entire family believes in Hinduism and also worships Hindu gods and goddesses. She herself is an exclusive devotee of Mahadev and Lord Shri Ganesha who believes in worshiping her. Kangana Ranaut’s father’s name is Amardeep Ranaut who is a businessman and her mother’s name is Asha Ranaut who is a school teacher. Apart from her parents, Kangana also has an elder sister named Rangoli Ranaut in her house. Kangana also has a younger brother named Akshit Ranaut.

Talking about Kangana’s marital status, she is still unmarried and even at the age of 35, she looks very beautiful. By the way, the news of her affair in Bollywood has been linked with all the actors. The news of her affair came with Nicholas Lafferty, Ajay Devgn, and Hrithik Roshan. However, how much truth is there in all these things, only Kangana knows. During the day of her struggle, she had an affair with Aditya Pancholi as well. However, later Kangana had also leveled allegations of assault on Aditya Pancholi, after which she parted ways with him.

Apart from sharing photos on her Instagram, she also shares information about her films with her followers. Apart from this, she also endorses some brands for which she also does sponsor posts. She is also present on Facebook where she has more than 7.9 million followers.

Wikipedia has also covered Kangana on its page. Apart from this, she is also present on Twitter where her number of followers was in the millions but due to her controversial tweets one after the other, Twitter blocked her verified account.

After getting blocked on Twitter, she created a new account that currently has more than 72k followers. In the table below, we have shared with you the links of all his social media profiles, by clicking on which you will be able to access his profile page directly.

Talking about the total net worth of Kangana Ranaut, her net worth is around ₹100 crore. She charges from ₹10 crores to ₹15 crores for a film. Kangana is known for her excellent acting in the Hindi film industry, whose acting is loved by crores of people. She is known all over the world on the basis of her acting talent.

Although her journey to success has not been easy. After struggling for a long time, she has reached this stage. After working hard in modeling, acting, and filmmaking, she is now known to lead a luxurious life. Many people in the country take inspiration from her struggle. Her main source of earning is from acting in films and endorsing many brands. If reports are to be believed, she charges around ₹15 crores for working in a film. Apart from this, she charges around ₹3 crores to ₹5 crores for endorsing a brand.

Kangana Ranaut lives in Mumbai and apart from this, she has bought a property in Manali and built a mansion that is worth around ₹30 crores. They have built organic farms, stables, and cottages in this mansion as snowfalls there. Kangana bought a three-storey building in Pali Hills in the year 2017. If reports are to be believed, he bought it for ₹20 crores. She made this building her office, which she named Manikarnika Films. Kangana has spent about ₹48 crores in making it.

Kangana bought her Manali bungalow in 2018 for ₹10 crores, which has 8 bedrooms, and cost her around ₹20 crores to build. Kangana bought her first car BMW 7 Series at the age of 21. Apart from this, she had bought a Mercedes Benz GLE Class SUV for her Manali home, whose price ranges from ₹73.7 lakh to ₹1.25 crore.

The Maharashtra Govt illegely broke down KanganaRanaut’s house while she was on a flight to Mumbai, with only 24-hour notice. Completely illegal considering the Govt has banned demolitions due to COVID till September 30. This is what Fascism looks like.

Some Interesting Facts About Kangana Ranaut:

Ans. Avinash Sharma loved Kangana’s sister Rangoli in his heart, so he proposed to Rangoli in college, but Rangoli rejected his proposal. After the rejection, he hearted badly and he asked his friend Prem Singh to throw acid on the Rangoli, and Prem Singh agreed to it. So, Prem took the getup of a courier and reached the house of Rangoli and threw acid on it. Which causes Rangoli to burn badly.

Q. Who is Kangana Ranaut’s husband?

Ans. Kangana is unmarried till now.

Ans. Yes, Kangana is the highest-paid actress in Bollywood. She charged 24 crores for the biopic of Jayalalithaa.

Q. What is the cast of Kangana Ranaut?

Ans. Kangana was born into the Rajput Family, so her caste is Rajput.

Q. How much is Kangana Ranaut worth?

Ans. Kangana’s net worth is about 13 million dollars, approximately 94 crores.

This is the full details on Kangana Ranaut Age, Wiki, Family, Husband, Biography, Net Worth & More. Share this post with your friends and keep visiting us on celebwale.com for famous personalities and trending people’s biography with updated details. If you have any thoughts, experiences, or suggestions regarding this post or our website. you can feel free to share your thought with us.