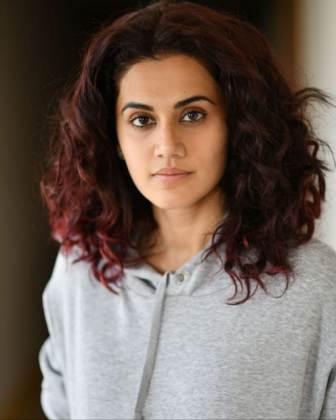 Taapsee Pannu is an Indian actress known for working predominantly in Hindi, Malayalam, Telugu, and Tamil language films. She has also received 2 Filmfare Awards for her brilliant work in films. Apart from this, since the year 2018, she is also featured in the list of Celebrity 100 of Forbes India. Taapsee was born on 1 August 1987 in a Sikh family in New Delhi.

She did her early schooling at Mata Jai ​​Kaur Public School in Ashok Vihar, Delhi. She also received her high school education from this school. She was very fond of dancing during her schooling. Pannu started taking training in Kathak and Bharatnatyam from her 4th class due to her passion for dance since childhood. For 8 years, she received her dance training from the famous Pandit Birju Maharaj’s disciples.

After completing her school life, Taapsee enrolled for her graduation in Guru Tegh Bahadur Institute of Technology, New Delhi. From where she did her engineering degree in computer science. While pursuing engineering in college, she retained her childhood hobby and formed a western dance group with 4-5 classmates and led her team, and won many prizes by participating in inter-college competitions.

However, after completing engineering in computer science, she wanted to do an MBA, for which she also appeared in the entrance exam of CAT. She passed the CAT exam with 88% marks but due to these marks, she could not get admission to her favorite college. So, she thought of taking the CAT exam again next year. Along with preparing for the entrance exam, she started working in a company as a software engineer, which she left after 6 months.

While surfing the internet in those days, came across Channel V’s beauty pageant contest Get Gorgeous Pageant. She sent some of her casual photos by filling out the form, after which she was also selected for the contest. Where she took part in a TV show for the first time. She also got popular from this show, after which she started modeling full-time for her pocket money.

During this time she was also featured on the cover page of just for Women and MaaStars magazine. It was during her modeling career that Pannu started getting offers for films from the South film industry but initially did not interested due to the unknown city and unknown language.

But after a few years, she lost her interest in modeling as she thought that she could never get proper recognition through modeling. So, she decided to act in films. Although her father did not like working in films, he wanted Taapsee to strengthen her educational background. But she persuaded her father by saying that she made her debut with the film Aadukalam opposite Dhanush, if she does not succeed with this film, she will leave everything and do an MBA.

But her hard work and luck supported him tremendously and the film proved to be such a super-duper hit that the film won 6 National Awards that year. She also made her debut in the Telugu film industry with the film Jhummandi Naadam. After that, she never looked back and worked as a native actress in the Tamil and Telugu cinema industry and gave one after one hit films.

This was the reason that she got the opportunity to work in the Telugu film Mr. Perfect where she was nominated for Filmfare Awards for Best Supporting Actress. After working in the Tamil and Telugu film industries, Taapsee turned to Hindi films in 2013. In 2013, David Dhawan, who was making a famous romantic comedy film, was looking for a Preity Zinta look heroine, then popular filmmaker Puri Jagannath of South films suggested the name of Taapsee Pannu.

After this, she met Taapsee and signed him for the film at first sight without auditioning. In this way, she made her Bollywood debut in 2013 with the Bollywood film Chashme Baddoor which was a commercial hit. Her second Bollywood film was Baby which was released in 2015, in which she played the character of an undercover agent Shabana Khan. Her character in this film was appreciated by the film critics.

Then she worked in another Bollywood film Pink, in which she offered tremendous acting. Pannu has worked in many superhit Bollywood movies like The Ghazi Attack, Naam Shabana, Dil Junglee, Soorma, Manmarziyaan, Badla, Mission Mangal, Judwaa 2, Saand Ki Aankh, and Thappad. In 2021, she played the main character in the film Haseen Dillruba, released on the ott platform Netflix.

Talking about Taapsee’s upcoming films, she is working on Loop Lapeta, the Hindi remake of the 1998 German film Run Lola Run. She will also be seen in Anurag Kashyap’s Dobaaraa which is being produced by Ekta Kapoor. More recently, Taapsee completed shooting for the sports drama film Rashmi Rocket in January. Pannu has also signed Shabaash Mitthu, a biopic on female cricketer Mithali Raj. Recently, she completed the shooting of Ajay Bahl’s thriller movie Blur, which is ready to be released in 2022.

Taapsee Pannu age is 35 years old in the year 2023, she is one of the finest actors in the film industry and is known for her looks and appearance. She is quite beautiful in appearance. She has also won many beauty competition shows with her look.

In 2008, she participated for the first time in the Miss India beauty pageant competition show where she became the winner of the Pantaloons Femina Miss French Face Title and Safi Femina Miss Beautiful Skin Titles. She does various exercises in the gym to maintain her beauty and fitness.

Taapsee was born in a Jat Sikh family. Her entire family believes in Sikhism and also pays obeisance to Waheguru. Apart from this, she respects all religions. Taapsee Pannu’s father’s name is Dilmohan Singh Pannu who is a retired real estate agent and her mother Nirmaljeet Pannu is a housewife.

Apart from her parents in Taapsee’s house, she also has a younger sister named Shagun Pannu. Shagun is 4 years younger than him. Talking about Taapsee Pannu’s marital status, she is still unmarried, although her name has been linked with some people. Taapsee fell in love for the first time with a boy when she was in class 9 of her school. Apart from this, she has also given her heart to Tamil actor Mahat Raghavendra.

Later she also fell in love with Denmark badminton player Mathias Boe. A few years ago, in an interview about her personal life, “she said that I have never dated any star and will never date anyone and I can give this to you by writing on a stamp paper. I am clear that there can only be one star in a relationship, that is me. I personally don’t think it can work between an actor and an actress.”

According to a report, in the year 2021, Taapsee Pannu’s net worth is $ 6 million. She has assets worth ₹44 crores. Taapsee earns more than ₹30 lakhs in a month. Her income in a year is said to be more than ₹4 crores. Not only this, but She is also very fond of expensive and royal vehicles. Pannu has vehicles like BMW 5 series, Mercedes SUV and Renault Captura.

She also has several real estate properties in Mumbai. Apart from this, she runs an event management company, The Wedding Factory, along with her sister Shagun. In the year 2018, Taapsee bought the badminton franchise Pune 7 Aces which plays in the Premier Badminton League. In 2018, Taapsee was featured in Forbes India’s Celebrity 100 where she was ranked 67th.

She was featured for the second time in the year 2019 when she was ranked 68th. Let us tell you that Taapsee Pannu charges ₹1 crore to ₹2 crores for a film (Pannu Fees). She earns around ₹2 crores in a year from just brand endorsements. Apart from this, she is the brand ambassador of Uber, Garnier, Nivea, Kurkure, and Women’s Horlicks. Taapsee, who has given many hits, lives a royal lifestyle today.

Taapsee has a verified account on Twitter so that new users can easily connect with her. She has more than 4.6 million followers on Twitter. Apart from this, Wikipedia has also covered them on its page. In the table below, we have shared with you the links of all their social media profiles, by clicking on which you will be able to access their profile page directly.

Taapsee Pannu has worked in many films in Hindi cinema as well as Malayalam, Tamil, and Telugu industries. She is mainly known for working in Hindi Bollywood films and has won many awards on the basis of his acting. She won her first award in the year 2011-12 National Film Award in the category of Best Actress for the film Mogadu.

Some Interesting Facts About Taapsee Pannu:

Ans. David Dhavan directed Chashme Baddoor is the first Hindi movie of Taapsee which was released in 2013.

Que. Who is Taapsee Pannu’s boyfriend?

Que. Who is the father of Taapsee Pannu?

Ans. Dilmohan Singh Pannu is the father of Taapsee Pannu who is a retired real estate agent.

This is the full details on Taapsee Pannu Biography, Age, Height, Education, Father, Family, Boyfriend, Husband, Net Worth & More. Please share this post with your friends and keep visiting us on celebwale.com for famous personalities and trending people’s biography with updated details. If you have any thoughts, experiences, or suggestions regarding this post or our website. you can feel free to share your thought with us.