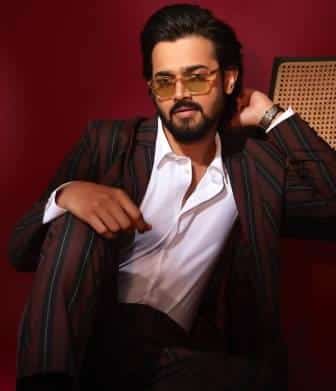 Bhuvan’s family shifted to Delhi later on. Bam went to Green Fields School in Delhi to complete his primary and intermediate education. Thereafter, he graduated with a bachelor’s degree in history from Shaheed Bhagat Singh College, Delhi University.

He kicked off his internet career by uploading a video where he condemned a journalist in a humorous way who (journalist) asked an insensitive question to a woman regarding the death of her son due to the Kashmir flood. This video went viral in Pakistan. This incident inspired him to create his own YouTube channel. He created his YouTube channel BB Ki Vines in June 2015.

His videos are shot using a front camera on a phone. His videos are full of comedy. In his videos, he himself plays roles of various characters such as Bhuvan, Banchoddas, Sameer Fuddi, Titu Mama, Bablu, Janki, Mrs. Verma, Adrak Baba, Mr. Hola, Papa Maakichu, Detective Mangloo, Dr. Sehgal and Babli Sir.

Not only does he create comedy videos but also writes and sings songs. He has released several music videos. To name a few, Teri Meri Kahaani, Sang hu Tere, Safar, Rahguzar, and Ajnabee.

In October 2021, he uploaded a web series named Dhindora on his YouTube channel. This series contains eight episodes. Bhuvan made his debut on the OTT platform with a comedy-drama web series Taaza Khabar. This series is streaming on Disney+Hotstar.

Bhuvan was born in a middle-class Hindu family in Vadodara. His entire family follows Hinduism and worships Hindu Gods. Bhuvan Bam’s father’s name is Avanindra Shankar Bam. Bhuvan Bam’s mother’s name is Padma Bam and she was working at ABB Company in Faridabad.

There is also a younger brother in his house whose name is Aman Bam. Aman is a pilot by profession. He lost his parents in the nationwide Covid pandemic. Bhuvan’s parents had died due to Covid complications. Bhuvan’s marital status is still unmarried. There are no details about Bhuvan’s girlfriend or wife.

Bhuvan Bam’s total net worth is around ₹ 30 crores. He is one of the most popular YouTubers in India. He has more than 26 million subscribers on his YouTube channel, due to which his videos are viewed by millions.

He is popular across the country and has worked with many Bollywood celebrities. He earns around ₹ 20 lahks to ₹ 25 lahks in a month. Apart from this, he also earns well from sponsors.

Some Interesting Facts About Bhuvan Bam:

Disclaimer: All images are available on the Bhuvan Bam Instagram Account. Images can be taken from his official Instagram account for educational purposes. Image Credit goes to the respective owners of the Image Creator. We try to gather accurate data but sometimes there might be some mistakes, Kindly let us know if you find mistakes, and we would correct them. We do not take any Guarantee/Claim That the information we have gathered is 100% correct.

This is the latest information on Bhuvan Bam Biography, Wiki, Age, Height, Family, Wife, Net Worth & More. Please share this post with your friends and keep visiting us on celebwale.com for famous personalities and trending people’s biography with updated details. If you have any thoughts, experiences, or suggestions regarding this post or our website. you can feel free to share your thought with us.