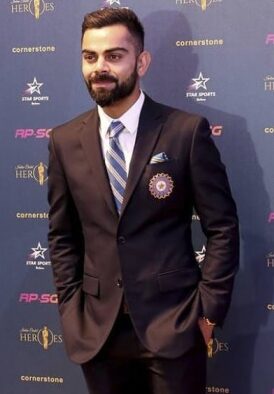 Virat Kohli is an Indian international cricketer and a former captain of the Indian national cricket team. He plays domestic cricket for Delhi and plays for Royal Challengers Bangalore in the IPL. Virat was born on 05 November 1988 in New Delhi. He received his early education from Vishal Bharti Public School. He was fond of cricket from the beginning. In 1998, at the age of just 9, he joined the West Delhi Cricket Academy where he trained under the supervision of his coach Rajkumar Sharma.

Playing for the Delhi Under 17 team in the 2004_05 Vijay Merchant Trophy, he was the highest run-scorer in 7 matches with a total of 757 runs with 2 centuries. Kohli made his first-class debut against Tamil Nadu while playing for Delhi. In his debut match at the age of 18, he scored only 10 runs. He came into the limelight when he scored 90 runs for his team against Karnataka even after hearing the news of his father’s death. After getting out, he went straight to his father’s funeral.

Batting at number 3 throughout the series, Kohli scored 235 runs in 6 matches at an average of 47 and was the third highest run-scorer in the tournament. Thanks to his brilliant performance, the India Under 19 team won the ICC Under 19 World Cup. After that in 2008, Virat Kohli was selected in the Indian international cricket team that went to Sri Lanka in the absence of Virender Sehwag and Sachin Tendulkar. Kohli made his debut for the senior national side against India in 2008.

His performance soon made him a regular in the squad and earned him a spot in the 2011 ICC World Cup The same year he made his Test debut. The next year he was appointed the vice-captain of the ODI team and in 2014, he was given the Test captaincy following Dhoni’s retirement from Tests. In 2017, Dhoni stepped down from the position of ODI captain, and Virat was passed on the baton.

Kohli was born in Delhi in the year 1988 and he is now 32 years old in 2020, his parent’s name is Saroj Kohli and Prem Kohli. His father was a criminal lawyer who died on 18 December 2006. He was 54 when Kohli was playing a Ranji match. Kohli’s family includes his elder brother Vikas Kohli and his sister-in-law and elder sister Bhavna Kohli after his father’s death. Virat Kohli got married to Bollywood actress Anushka Sharma on 11 December 2017, after which she too has become a part of Kohli’s family. Kohli and Anushka were blessed with a little beautiful daughter named Vamika Kohli.

Virat Kohli’s passion for cricket and his consistent performance are increasing in the same way as his net worth is also increasing. It is difficult for any player to reach the point where Kohli has taken his game today. According to a Forbes report about his earnings in 2017, he earned $ 1 million from his last year’s salary and fees for every match. At the same time, his total assets increased from $ 15 million in 2016 to $ 22 million in 2017. He was ranked 9th among the highest-grossing sports athletes in 2017.

His brand value was $18 million, and he recently surpassed the country’s biggest celebrity brand, Shah Rukh Khan. Kohli’s highest-earning share comes from the brand’s advertisements, he earns a lot from the advertising of brands like Puma, Audi, MRF, Tissot, and Colgate. In addition, he has also shot commercials for several companies. So far they have a list of more than 17 companies from which they earn a lot of money.

They have signed agreements with some companies for many years, such as they have had a contract with Puma for 6 years and they have signed an agreement of 14 million dollars per year. His most recent deal is for 8 years for 15 million which he has signed with MRF company, a giant company in the field of car, truck, and bike tyres.

Kohli is very active on his social media accounts, on which he continues to promote his brand and he is very popular among his fans. He has become a youth icon for many youths around the world. On his Instagram, he keeps sharing his fitness-related videos and photos with his fans. If they want to reach any message to their fans, then they use their social media accounts only. If you have not yet followed Virat Kohli’s Twitter and Instagram accounts, then the link below is given.

Some Interesting Facts About Virat Kohli:

This is the latest information on Virat Kohli Biography, Age, Height, Daughter, Family, Wife & Net Worth & More. Share this post with your friends and keep visiting us on celebwale.com for famous personalities and trending people’s biography with updated details. If you have any thoughts, experiences, or suggestions regarding this post or our website. you can feel free to share your thought with us.