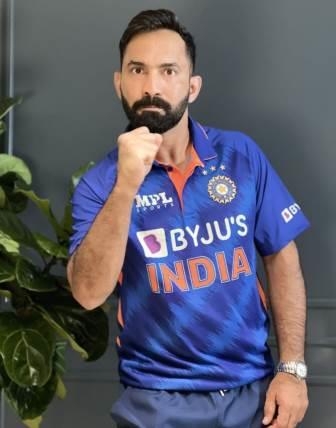 Dinesh Karthik is a star batsman of the Indian team who performed well as a finisher in IPL 2022. He was born on 1 June 1985 in Tiruchendur, Thoothukudi, Tamil Nadu. His full and real name is Krishnakumar Dinesh Karthik and people love to call him DK. After birth, his family shifted to Qatar. But later he came back to India and it was here that he received his early education. He started playing cricket at the age of just 10.

Dinesh’s father Krishnakarthik used to play first-class cricket for Chennai. He has taught cricket to Dinesh. Dinesh’s father was very disappointed in his cricket career as his parents never wanted him to become a cricketer. So his father gave him very tough cricket training so that he could not fail in his cricket career. He learned the nuances of cricket from former Indian player Robin Singh. In 1999, he was selected for the under-14 team of Tamil Nadu and after that, he joined the under-16 and under-19 teams of his state.

Karthik got the opportunity to play his first first-class cricket match in 2002, where he made his debut for Tamil Nadu against Baroda. He was selected in the Indian under-19 World Cup squad in 2004 due to his excellent performance in first-class matches. In the same year in 2004, when the Indian team’s wicket-keeper Parthiv Patel was out of the team due to injury, Dinesh was selected in the national team for the Indian team’s tour of England. He made his ODI debut on 5 September 2004 against England at Lord’s.

After that, when the Australian team came to India, he made his Test debut on 03 November 2004 against Australia at the Wankhede Stadium. However, his performance in the Indian team was not so well, due to which he kept getting out of the team. But his performance in domestic cricket was excellent. In 2005, Mahendra Singh Dhoni was a new player who had some selectors on his side who wanted to give him a chance in the team. On the other hand, there were some selectors who wanted to retain Dinesh Karthik on the team.

Finally, Dhoni got his chance and he ensured his place in the team with a brilliant 148 runs against Pakistan in Tests. Dhoni had gradually ensured his place in Team India and the same Dinesh Karthik remained as his substitute. Karthik used to take over the responsibility of wicketkeeping in Team India only when Dhoni was out of the team. During this time he was giving good performance in domestic cricket and he was also made the captain of the Tamil Nadu state team. But he did not get many opportunities due to Dhoni being on the team and he kept going inside and out of the team.

Karthik made his T20I debut against South Africa at the Wanderers Stadium on 01 December 2006. He is the first Indian player to win the Man of the Match award in the T20 format. In 2018, when the Indian team went to Sri Lanka to play the Nidahas Trophy, the team’s senior players were rested. Karthik was also included in the team led by Rohit Sharma. He played such a swashbuckling inning against Bangladesh in the final that his innings are still fresh in the hearts of every Indian.

When the Indian team was on the verge of losing the final and the team needed 34 runs in 2 overs to win the match. Karthik was then sent to play the role of the finisher where he scored 22 runs in the final over to give victory to his team. When the Indian team needed 5 runs to win on the last ball, then Karthik hit a six to give the team an incredible victory. He played the role of a brilliant finisher after which he was seen as a finisher. Dinesh Karthik started his IPL career in 2008 playing for the Delhi Daredevils team against Rajasthan Royals. In 2011, he was bought by Kings XI Punjab for ₹6.50 crores.

This year was very tremendous for him and he played the role of a finisher in many matches, leading RCB to victory and reaching the semi-finals. His performance was so great that he was selected in Team India for the home T20 matches against South Africa. He also performed well in this series as a finisher, after which he is now believed to be included in the Indian team for the T20 World Cup 2022 to be held in Australia.

After that, he was doing very well in his career and was the second wicketkeeper of the Indian international team. Apart from this, he was also the captain of the Tamil Nadu state cricket team. However, behind his back, his own colleague cricketer Murali Vijay’s affair was going on with his wife Nikita Vanjara. The whole Tamil Nadu Ranji team knew about Murali and Nikita’s affair, but DK was not even aware of their affair. However, one day her wife told him that she was pregnant and would soon become the mother of Murali Vijay’s child.

After this, Karthik’s wife demanded a divorce from him and both of them got divorced in 2012. Nikita went with Murali who was opening for CSK and India. The same DK was shattered and went into a deep depression. He grew a beard and became a Devdas, his performance had also reached a low level, due to which he was dropped from the Indian team. He continued to fail in Ranji as well and lost his captaincy to Murali Vijay. He also started failing in IPL and became so depressed that he thought of committing suicide.

He had also stopped going to the gym after which his trainer came to his house one day and found Dinesh Karthik scattered. After that, he talked to DK and somehow persuaded him to come to the gym. DK slowly started training in the gym and Dipika Pallikal was also training in the same gym. Dipika was shocked to see DK in depression and started counseling her along with the trainer. Slowly DK started training and later both started working out like crazy. Encouraged by Dipika, DK started net practice and performed brilliantly in home matches.

He was now in form and became the captain of KKR after being selected in white-ball cricket for India. On the other hand, Murali Vijay married DK’s first wife Nikita but failed. He was first dropped from the Indian team and later from the CSK team as well. His bad times had begun. DK married Dipika after some time. However, after a few years, Rishabh Pant joined Team India and took his place. DK was also 34 years old and he had come to know that his time was up. KKR’s captaincy was also snatched from him due to poor form and he wanted to retire from international cricket and only wanted to play IPL.

During that time his wife became pregnant and he became the father of two twins. He had stopped playing but his dream was to have a luxurious house in Pose Garden. The cost of the house was very high and Karthik was not sure whether he would be able to afford it or not. Then his wife Dipika hold his hand and said that both of us will work hard again and will come back and buy a house. He started training again with Dipika and bought a palatial house in Pose Garden.

In 2022, Dinesh Karthik got a call from Kashi of CSK that Thala (Dhoni) wanted him on the team as a wicketkeeper. In the 2022 IPL auction, CSK tried their best to buy him but RCB put DK on their team by bidding more. His wife Dipika also played the World Championships in Squash in Glasgow 6 months after delivery and won mixed doubles and women’s doubles with Joshna Chinappa. DK also helped RCB win many important matches with his performance in IPL 2022. He has made a blistering comeback and would like to ensure a place in the T20 World Cup as a finisher in place of the retired MS.

The total net worth of Dinesh Karthik is around ₹58 crores. He is the senior player of the Indian team who has recently returned to Team India due to his excellent performance in the IPL. They are paid by BCCI ₹15 lakh per test match, ₹6 lakh per one-day match, and ₹3 lakh for T20 matches. He plays for Bangalore in IPL where he earns ₹5.5 crores annually. Dinesh Karthik also has a luxurious bungalow in Chennai where he lives his luxurious life. He is also the owner of the Porsche 911 Turbo S vehicle.

Some Interesting Facts About Dinesh Karthik:

This is the full details of Dinesh Karthik Biography, Age, Height, Wife, Children, Family, Net Worth & More. Share this post with your friends and keep visiting us on celebwale.com for famous personalities and trending people’s biography with updated details. If you have any thoughts, experiences, or suggestions regarding this post or our website. you can feel free to share your thought with us.