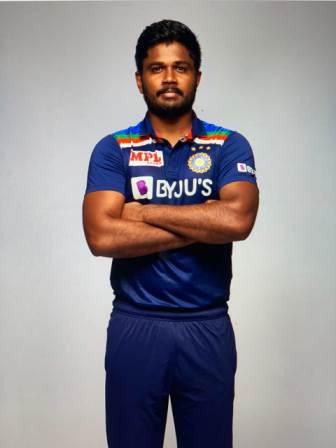 Sanju Samson is an Indian international-level player who is known for playing cricket. He was born on 11 November 1994 in Pulluvilla village of Thiruvananthapuram city, Kerala. His father has been a retired football player and coach, due to which his mind also started looking towards sports from the beginning. Sanju’s elder brother Saly Samson has been a junior level player who has also represented Kerala at junior level cricket. Sanju’s father Samson Viswanath was posted as a constable in Delhi Police.

His childhood was spent in Police Residential Colony near GTB Nagar in North Delhi. He completed his childhood education at Rosary Senior Secondary School, Delhi. He learned the nuances of cricket from coach Yashpal at the Cricket Academy located at DL DAV Model School located in Shalimar Bagh. He was very talented in playing cricket since childhood, but when he could not be selected for the Delhi Under 13 cricket team.

So, after that, his father took voluntary retirement from the Delhi Police Force, and a year after his retirement, he also announced his retirement from football. He then moved with his entire family to Kerala where Sanju and his elder brother Saly pursued their cricket careers. Both joined the Master’s Cricket Club after shifting to Kerala, after which Sanju took training in cricket from coach Biju George at the Medical College Ground, Thiruvananthapuram.

Biju later revealed in an interview that it was only during one of Sanju’s practice net sessions that he recognized that Sanju had an extra cricketing talent. Sanju was also very good in his studies and he was very serious and sincere during his academic education. He did his high school education at St. Joseph’s Higher Secondary School, Kerala, followed by a BA degree in English Literature from Mar Ivanios College, Thiruvananthapuram.

Apart from cricket, he has been dreaming of becoming an IAS officer since childhood. Taking forward his cricketing career, in the year 2007, he was selected for the first time in Kerala Under 13 cricket team where he got a chance to captain. Sanju scored a century while performing brilliantly in his debut match itself. In this Under 13 tournament, Sanju scored a total of 973 runs in 5 matches due to his 4 brilliant centuries and was the highest run-scorer in the tournament.

Samson was awarded the Player of the Tournament for this performance. After this, playing for the Kerala Under-15 cricket team, Sanju scored a double century in just 138 balls against Goa in the Vijay Merchant Trophy. He was the highest run-scorer in that season, scoring 498 runs with the help of two centuries and two half-centuries. Selected in the 2009-10 Ranji Trophy at the age of just 14, he became the youngest player to play Ranji Trophy for Kerala.

On the basis of his brilliant performance, he was also made the vice-captain of the Indian Under-19 team. In the year 2012, he got the opportunity to appear in the IPL for the first time when he was bought by Kolkata Knight Riders but he did not get a chance to play a single match in that season and he was released by KKR the next year. The next year in 2013, he was included in the Rajasthan Royals team where he got an opportunity to debut in the IPL against Kings XI Punjab on 14 April 2013.

He was included in the team as a wicket-keeper batsman. In his second match, he scored 63 runs off 41 balls, becoming the youngest player to score a half-century in the history of IPL. In the year 2014, playing for Rajasthan, he scored 339 runs in 13 matches in the entire season. But in the same year, Rajasthan banned him for two years after finding him guilty in the match-fixing and betting case, after which Delhi Daredevils included him in their team in the year 2016.

Playing for Delhi, Sanju scored a total of 291 runs in the entire season with a century. He scored 386 runs for Delhi the next year. Where he became the highest run-scorer from the Delhi side. In the IPL auction held in the year 2018, Rajasthan Royals again included him in their team, and since then he is continuously participating in the IPL for Rajasthan. In January 2021 this year, Rajasthan made him the captain of the team where he scored a century while captaining in his very first match.

Talking about Sanju Samson’s international cricket career, his name was included in the Indian team’s squad for the first time in the year 2014 for 5 ODIs and T20 matches against England. Where he was selected as the backup of Mahendra Singh Dhoni but he could not be a part of the playing XI. He was included in the Indian team that toured Zimbabwe in 2015 where Sanju made his international debut against Zimbabwe at Harare on 19 July 2015.

After this, he did not get a chance to play in the playing XI of ODIs. The Indian team, which went to Sri Lanka in June 2021, was once again selected for T20 and ODI matches where Sanju Samson made his international ODI debut for the first time on 23 July 2021 against Sri Lanka. In his debut match, he played an innings of 46 runs in 46 balls. Sanju, who was included in the T20 team of the Indian team on the tour of Sri Lanka.

He once again made a disappointing performance with the bat, scoring only 34 runs in the 3-match series. In the year 2018, Sanju Samson started a Six Guns Sports Academy. In this academy, young players of Thiruvananthapuram are given training in cricket and football. In the year 2021, Sanju was appointed as the Kerala State Election Icon for the assembly elections.

Sanju Samson’s age is 27 years in 2022, he is a young player for whom form of fitness is important. He is a power shower and explosive batsman who is known to put long shots on the cricket field. In the lockdown during Corona, he has done a lot of work on his fitness. Earlier, he has been out of T20 matches against England due to a lack of fitness. This time, in Lockdown, he has increased his ability to do his fitness while doing a lot of work. Even in this epidemic, he did not stop his practice but worked 6 to 7 hours daily on his fitness.

During this time, Sanju paid attention to keeping his fitness tight with the help of a Personal Trainer and trainer Gomez had changed his complete diet, even for 6 months he had become absolutely vegetarian. In an interview, Samson said that “I worked a lot on my fitness, diet, and training because my game is of power hitting. I had time to work on it in five months. I think I have enhanced my strength.”

If any player is selected for the Indian cricket team then he has to pass this test before joining the team, then he knows to become part of the international team. In order to maintain his fitness, he practices hours in a daily gym and along with this he also keeps a special focus on his diet.

Sanju Samson’s height in feet is 5 feet 7 inches, which is 170 centimeters. His bodyweight is 75 kg and Samson’s body measurement is 40-32-14. His eye color is Black and his hair color is also Black.

Sanju was born in a middle-class Latin Catholic family. His entire family believes in the Christian religion and also prays in the church for God. Sanju Samson’s father’s name is Samson Vishwanath, earlier working as a constable in Delhi Police Force. His father is a retired football player and coach who has also led Delhi in the Santosh Trophy.

Sanju’s entire family lived in Delhi earlier, but when he was not selected for the Delhi Under 13 team, his father shifted to Kerala with his family after taking voluntary retirement from the police force. Where Samson completed his further training in cricket. Sanju Samson’s mother’s name is Ligy Samson and she is a housewife. Apart from his parents in Sanju’s house, there is also an elder brother named Saly Samson. His brother has represented Kerala in junior cricket and is currently working in AG’s office.

Talking about Sanju’s marital status, he is married. His wife’s name is Charulatha Samson. Charulatha is brought to his college Mar Ivanios College, Thiruvananthapuram. I met during my BA studies. Then Sanju first sent a friend request from her Facebook account, which was accepted by Charulatha, and later the conversation started slowly.

After the conversation, both of them slowly whenever they got time started meeting each other. It was not known to him when the meeting turns into love. Finally, after dating each other for about 5 years got married on 22 December 2018 in a private ceremony in Kovalam. A total of 30 people were involved. The wedding reception was also held in Nalanchira which former great Indian player and captain Rahul Dravid attended. Both have been married for 3 years and Sanju is looking very happy in his married life.

Talking about Sanju Samson’s total net worth, his total earnings range from ₹52 crores to ₹55 crores. Sanju has been bought by Rajasthan in an IPL auction for ₹8 crores and included in his team and his IPL salary is also ₹8 crore annually. Sanju has performed brilliantly in the IPL so far and he has also joined the Indian team, in the same year he made his ODI International debut against Sri Lanka.

He has earned over ₹40 crores from IPL only, apart from this, Sanju sponsors brands like MRF, Kookaburra, SS, SG, etc. Apart from this, he endorses brands like Bharatpe, Puma, MyFab 11, Baseline Ventures, Club Mahindra, Haeal, and Gillette. He posts many sponsors on his social account pages, which contributes a lot to his earnings.

Sanju Samson’s account is present on all social media platforms where he shares his latest photos with his fans and followers. He exists on Instagram where more than 2 million followers are present and the number of their posts is more than 650. He shares photos of his batting and matches on his Instagram Page, and he keeps posting his personal photos and some sponsor.

There are about 2.7 million followers on Sanju’s account on Facebook. Sanju has done Wikipedia on his page, apart from his verified accounts on Twitter, where people can easily connect to them. There are more than 500K followers on Sanju’s Twitter account and he expresses his thoughts to the people through his tweet. In the table below, we have shared the links to all their social media accounts, by clicking that you will be able to access their profile page.

Some Interesting Facts About Sanju Samson:

This is the full details on Sanju Samson (Cricketer) Biography, Age, Height, Father, Family, Wife, Net Worth & More. Share this post with your friends and keep visiting us on celebwale.com for famous personalities and trending people’s biography with updated details. If you have any thoughts, experiences, or suggestions regarding this post or our website. You can feel free to share your thought with us.