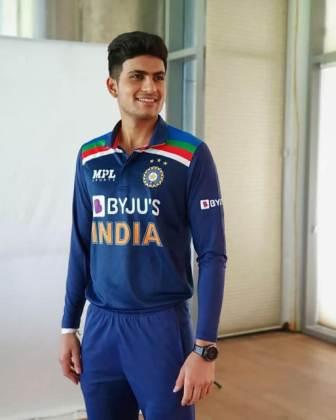 Shubman Gill is an Indian international cricketer who plays for Punjab in domestic cricket and India for International Cricket. In the IPL tournament, he plays for Kolkata Knight Riders. He is a right-handed batsman.

Gill was born on September 8, 1999, in Fazika, Punjab, India. He did his schooling at Manav Mangal Smart School, Mohali, Punjab. His father, Lakhwinder Singh was an agriculturist and had a dream of becoming a cricketer. But due to some reasons, he could not materialize his dream. Therefore, he wanted his son to become a good cricketer one day.

In this endeavor, he left no stone unturned and did everything possible that he could for Shubman. He recognized the cricketing ability of his son at an early age. In his agricultural land, he used to ask his hired help to throw balls to Shubman so that he can practice properly.

Subsequently, Gill’s family moved to Mohali and started staying in a rented accommodation near PCA stadium. Gill’s father had the belief in his son’s talent which is why he was not hesitant while taking this decision.

Gill’s father Says that passion for cricket came into Shubman’s life when he was just three years old. “He used to play only cricket at the age of 3. Children of that age ask for toys while he never asked for such things. A Bat and ball were the toys for him. Above all, he would sleep with a bat and ball.” Shubman’s father, Lakhwinder Singh said.

Shubman hit a double-century in the Vijay Merchant Trophy in his debut match for Punjab in the Under-16 category. He also scored 351 runs in Punjab’s inter-District Under-16 competition in 2014. In the same match, he also shared the record opening stand of 587 runs with Nirmal Singh.

Shubman Gill is an Indian Cricketer who has played National and International matches for the Indian Cricket team. In February 2017, he was the part of Indian Under-19 team that won the series against the England under-19 team.

On January 31, 2019, Gill made his One Day International (ODI) debut against Newzealand in the fourth ODI match of the series at Seddon Park, Hamilton. Thereafter, he made his test debut for India against Australia on December 26, 2020. He has made his highest score of 91 runs in the final test match against Australia at Gabba in 2021. With his knock of 91 run India made a historic win over Australia at the Gabba.

Shubman Gill’s age is just 22 years old in the year 2021, he is a brilliant cricketer of the Indian team who is also an amazing fielder with his batting. He has saved many useful runs for Team India with his brilliant fielding and all this is made possible by fitness. Shubman pays a lot of attention to his fitness, whether in the field or in the gym, he keeps working out all the time.

Staying fit is also a part of their game because according to the new BCCI rules if you fail the yoyo fitness test, you will not be able to be a part of the team. That’s why fitness becomes even more important for him because if he wants to play for Team India, then he has to be fit.

To keep his body healthy and fit, he also pays special attention to his diet and takes only nutritious things in food. Apart from this, he also consumes fruit juices so that he can stay healthy.

Shubman Gill’s height in feet is 5 feet 10 inches, which is 178 centimeters. His bodyweight is 53 kg and Shubman’s body measurement is 38-30-12. His eye color is Dark Brown and his hair color is also Black.

Shubman Gill was born in a Sikh family in Punjab. His entire family believes in Sikh customs. Gill’s father’s name is Lakhwinder Singh who is an agriculturist. Shubman’s mother’s name is Kirat Gill, who is a housewife. Besides his parents, Shubhaman also has an elder sister named Shahneel Kaur Gill.

Talking about the net worth of Shubman Gill, according to the sources, his total net worth is approx ₹7.4 crores. The main sources of his earning are playing cricket for India in International matches and playing in IPL for his team Kolkata Knight Riders (KKR). KKR gave ₹1.8 crores annually to Shubman for playing in IPL and he has been inducted in Grade C by BCCI and will get ₹1 crore.

Apart from earning from cricket, he has also done some brand advertisement on tv. His net worth has increased by 90% in the past 2-3 years. He has also bought a brand new Range Rover car. Shubman Gill also got a Mahindra Thar as a gift from Mahindra owner Anand Mahindra for his historic performance of 91 runs against Australia in the decider test match at Gabba.

Shubman’s account is available on all social media sites, where he keeps sharing his photos and videos with his fans. His Instagram account has more than 1.4 million followers and the total number of posts is over 200. Gill is also present on Facebook where his number of followers is above 2 million.

Apart from this, over 380k followers follow him on his Twitter account. He has also been given a place on his page by Wikipedia. In the table below, we are giving a link to all his social media accounts, by clicking on which you will be able to easily access his profile page.

Some Interesting Fact About Shubman Gill:

This is the full details on Shubman Gill Biography, Wiki, Cricketer, Birthday, Age, Height, Father, Family, Sister, Gf, Wife, IPL, Jersey Number, News, Instagram, Net Worth & More. Share this post with your friends and keep visiting us on celebwale.com for famous personalities and trending people’s biography with updated details. If you have any thoughts, experiences, or suggestions regarding this post or our website. you can feel free to share your thought with us.