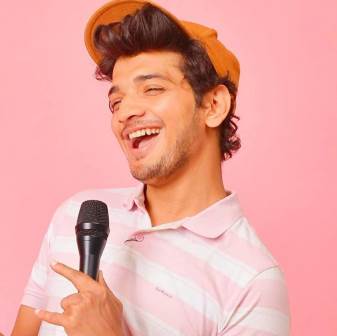 Munawar Faruqui is an Indian stand-up comedian who is in controversy every day due to his comedy. He is particularly known for his YouTube comedy videos Ghost Stories, Dawood, Yamraj & Aurat, and Doctor & Engineer. He was born on 28 January 1992 in Junagadh, Gujarat. Munawar’s full name is Munawar Iqbal Faruqui. His entire family is the victim of the Gujarat 2002 riots.

During those communal riots, his house was destroyed and his family had to face a lot of problems to survive. When Munawar was only 16 years old, his mother committed suicide. After this, his father was fed up with his turbulent life in Junagadh and shifted to Dongri, Mumbai. After shifting to Dongri, Mumbai in 2007, his father tried to make a fresh start.

But in 2008, his father fell ill on the bed, due to which the responsibility of the marriage of her three sisters fell on Faruqui’s shoulders. After this, he started selling utensils in a shop to make a living. He used to sell utensils in the shop during the day and complete his computer course at night. After completing a computer course, he worked as a graphic designer in an agency.

During that time he discovered that he himself was an expert in creating a funny line for posters. Then, he decided to make a career as a standup comedian. Influenced by standup comedy, he started working on an open mic, on which his family members also encouraged him to do the work of his choice. However, when Faruqui started showing interest in it, his family dismissed his work as time passed.

But when his popularity increased, people started coming to him for selfies, the family realized that stand-up comedy can also be a full-time profession. Finally, in July 2019, he performed his first one-hour Gujarati show Dodh Dahyo in Malad, Mumbai. He then started uploading standup comedy videos on his self-titled YouTube channel in January 2020 which soon gained massive popularity.

His comedy skills, sense of humor, and writing and speaking comedy scripts make him different from other comedians. On 24 January 2020, Munawar uploaded his first comedy video Politics in India to YouTube which got millions of views. In February 2020, Faruqui’s first-ticketed show opened in Mumbai and he lost his father in the same month, but he did not give up and attended the show where he managed to entertain the audience.

In April 2020, he uploaded Dawood, Yamraaj & Aurat on his channel, which earned him stardom. This video of him got a lot of love from the audience and has been watched by more than 12 million people so far. In August 2020, he launched his first official video song Jawab in association with Indian musician Spectra.

After this, Munawar started a nationwide tour in October 2020 and did a stage show in Indore, during which he was arrested for insulting Hindu deities. His nationwide tour came to a standstill after his arrest. In March 2021, he collaborated with Indian musician Naaz to launch a hip-hop song Aazmaish centered around his arrest in Indore.

Next month in 2021, he launched his second YouTube channel, Munawar Faruqui 2.0, on which he plays several games and does live streaming. In the year 2022, he appeared as a contestant in MX Player and Alt Balaji’s show Lock Upp which was hosted by Bollywood Queen Kangana Ranaut.

Munawar Faruqui turned 31 in 2023 and his body is very fit. He goes to the gym daily to maintain his body. Munawar Faruqui’s height is 5 feet 9 inches, which is equal to 175 centimeters.

His body weight is about 65 kg, he takes a proper diet to keep his body fit so that his body measurement is 36-32-12. His eye color is Black, and his hair color is also Dark Brown.

After this, he struggled to improve his life. Munawar Faruqui’s parents’ name is not known but his father Iqbal Faruqui was a driver and used to make a living somehow. His father passed away in February 2020, a very painful time for him, as his father died in the same month when his first ticket show started in Mumbai.

Apart from his parents, there are 3 sisters in his house, one of whom is named Shabana. Munawar’s marital status is still Divorced and he also has a love life with Nazila Sitashi, who’s a content creator. Nazil looks so glamorous and she creates content for social media.

The total net worth of Munawar Faruqui is around Rs 2 crore. His main source of earning is through standup comedians. He earns lakhs of rupees by doing his standup comedy shows across the country. He charges around 1.5 lakh to 2.5 lakh rupees per standup show.

Apart from this, he also earns a good amount every month by uploading videos on his YouTube channel. Millions of views come from the videos uploaded on his channel, from which he earns lakhs of rupees. In 2022, he participated in MX Player & Alt Balaji reality tv show where he charged around ₹3 lakh to ₹3.5 lakh per week. He also won the Lock Upp show and he got a trophy and ₹20 lakh and an Italy trip as the winner.

Faruqui is present on all social media platforms where he shares his photos and videos with people. There are more than 1 million people on his Instagram and he has shared more than 900 posts. He has more than 142k followers on Facebook. Wikipedia has also covered them on its page. Apart from this, he is also present on Twitter where he is followed by more than 145k people.

During the performance at Munro Cafe, Indore, he was accused of making indecent remarks to the Hindu deity Lord Ram Sita and Union Home Minister Amit Shah. On 2 January 2021, the Madhya Pradesh Police arrested him in the middle of the comic act. Police said that they have been arrested under Section 295-A, Section-298, Section-269, Section-188, and Section-34 of the Indian Penal Code.

After about a month, Faruqui was released under the direction of the Supreme Court. After Munawar’s arrest, some celebrities like actress Swara Bhaskar had given statements in his favor saying that allegations were being made to harass him for being a Muslim. After his release, he continued to do shows in different cities, but he started receiving many threatening messages and calls, due to which Munawar had to cancel more than 16 shows in a row.

Some Interesting Facts About Munawar Faruqui:

This is the full details on Munawar Faruqui Biography, Age, Height, Gf, Wife, Family, Net Worth & More. Share this post with your friends and keep visiting us on celebwale.com for famous personalities and trending people’s biography with updated details. If you have any thoughts, experiences, or suggestions regarding this post or our website. you can feel free to share your thought with us.