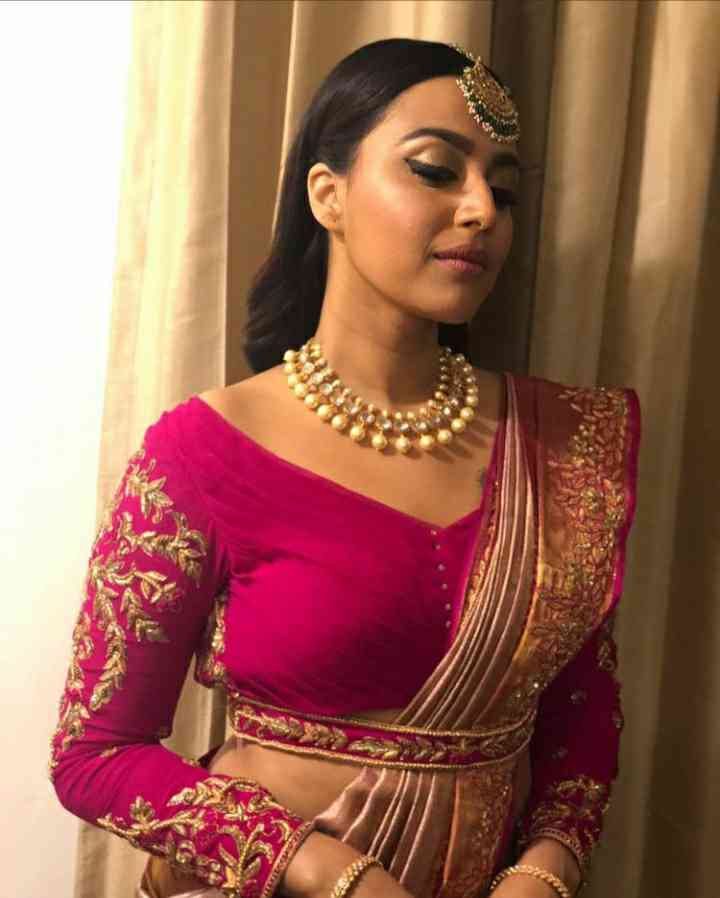 Swara Bhaskar is a well-known actress in the Bollywood industry. She was born on 9 April 1988 in Delhi, India. In Delhi, She did her schooling at Sardar Patel Vidyalaya. In her childhood, She used to be naughty and hyperactive. Swara was talented in every field. She was good at study, extracurricular activities, and sports as well.

As far as her higher education is concerned, She finished her graduation in English Literature at Delhi University’s Miranda’s House. During graduation, an actress Minisha Lamba was her classmate. Subsequently, She completed her Master’s degree in Sociology from Jawahar Lal Nehru University(JNU), Delhi. In her college days, She used to raise her voice on several social issues.

She was proactive in her college. Swara joined N.K. Sharma’s theatre group “Act One” in New Delhi before started her career in acting. She shifted to Mumbai in 2008.  In 2009, She made her debut with the film “Madholal Keep Walking” which did not perform well at the box office but the movie was screened at 33 Cairo international film festival.

Then, She appeared in the movie Guzarish directed by Sanjay Leela Bhansali in 2010 as a supporting actress along with Hritik Roshan and Aishwarya Rai Bachchan. Subsequently, She acted in the movie The Untitled Kartik Krishnan Project which was also a box office failure just like Guzarish. Till now, She was unnoticed by the audience.

Finally, She gained huge appreciation and recognition after appearing in a supporting role in the movie Tanu Weds Manu, a highly commercially successful movie released in 2011. Swara did the role of Payal, the best friend of Kangana Ranaut, for which She received several nominations, including Best Supporting actress conferred by Filmfare Awards.

In 2013, Raanjhanaa‘s movie was released in which She played the role of supporting actress Bindiya alongside Dhanush and Sonam Kapoor. This movie turned out to be the highest-grossing film of the year. As a matter of fact, She was praised and acclaimed by critics for her performance. She was also nominated for the best-supporting actress for Filmfare awards.

Along with the movies, She also did several TV shows like – Samvidhan, Rangoli, and Rashbhari. Swara has also appeared in a Pakistani comedy show Mazaaq Raat, which was telecast in 2015. In 2015, She had three film releases, the first was Tanu Weds Manu Returns in which She invoked the role of Payal. Again this movie was highly successful at the box office as well as she received huge acclamation for her acting.

Next was the romantic drama film Prem Ratan Dhan Paayo starring Salman Khan and Sonam Kapoor, Anupam Kher. In this movie, Swara played the role of Rajkumari Chandrika who is a Salman Khan sister. Both the movie of Swara Bhaskar was the highest-grossing Bollywood film of 2015. Her next release in the year 2015 was X: Past Is Present.

In which she played the role of Aunty, but this movie was not successful at the box office. Apart from this, she also played the role of Chanda Sahay in Nil Battey Sannata (2016) and Anarkali in Anaarkali of Aarah (2017), and Sakshi Soni in Veere Di Wedding (2018).

Swara Bhaskar age 34 years in 2022, is one of the most popular actresses in Bollywood. She is known for sharing her hot photos on social media. She works hard in the gym to maintain her body and exercises in different ways. She seems quite attractive with her body. She also takes special care of her health, for which she consumes nappy food, fruits, and juice so that she can stay healthy.

Swara Bhaskar was born into a prosperous Multicultural Hindu family. Therefore, she believes in Hindu beliefs and respects all religions. Swara Bhaskar’s father’s name is Chitrapu Uday Bhaskar, who is a Telugu and also a retired commander who belongs to South India.

Her mother’s name is Ira Bhaskar, is a Bihari and also a professor of cinema studies at Jawahar Lal University, New Delhi who belongs to Bihar. Apart from this, besides her parents, there is an elder brother named Ishaan Bhaskar who lived in the house of Swara.

Talking about her marital status, she is still unmarried. Her husband’s name has not been known yet due to not getting married. But some reports are believed to have had an affair with a writer Himanshu Sharma. She is very close with his boyfriend Himanshu Sharma and it is to be seen whether the two get married later.

Talking about Swara Bhaskar’s total net worth, according to some leading media portals, her total net worth is around $ 5.4 million which is about ₹ 40 crores. She is known for living her luxurious lifestyle. She also owns a BMW X1 car of the BMW series. She charges around 30 lakh to 45 lakh fees for her role in a movie.

Talking about Swara’s favorite things, her favorite actors are Shah Rukh Khan and Salman Khan and her favorite actress is Meryl Streep. She also loves to hear Shakira’s song Hips Don’t Lie. Apart from this, she loves watching movies.

Swara loves to travel whenever she gets the chance, her favorite places being Italy, Istanbul, and Beirut. Her list of favorite things is very long, whose list we have given in the table below, which you must read once.

Apart from this, she is also very active on Twitter, where she has more than 1.5 million followers. She is also always highlighted due to her controversial tweets. Swara is also covered by Wikipedia on its website. In the table below, we have given all their social media links and Wikipedia links, by clicking on which you will be able to access their profile page directly.

Swara Bhaskar has an old relationship with the controls, tell you where there is no Swara, it cannot happen. She has raised her voice on many social issues even during her college days and used to be very active in college. So, let us know about some of their controversies.

After the release of Deepika Padukone and Ranveer Singh’s Starrer film Padmavat, Swara wrote an open letter to the film’s director Sanjay Leela Bhansali and wrote, “At the end of your magnum opus, I felt reduced to a vagina only”.

In November 2019, Swara once again raised controversy, this time verbally abusing her 4-year-old co-actor during a popular YouTube show and publicly calling her Chutiya (It is a term which is a type of abuse that is considered foolish and foolish in society. It is also said to be kind of foolish, and stupid people).

According to Swara, she did not say the word Chutiya (foolish or stupid) on the face of the child actor, but in her view, she thought the word in her mind because the child was really bad. Subsequently, people active on the internet (Netizens) accused him of child abuse and trolled him on Twitter.

Apart from this, an NGO had also filed a case with the police for child abuse on Swara. Also, she was heavily trolled on social media by the users on her Objectionable scene in the movie Veerey Di Wedding.

Swara participated extensively in the protests against the Citizenship Amendment Act (CAA) of 2019 and was an outspoken critic of the act. She gave several speeches in protest against this act, due to which several cases of inciting communal hatred against provocative speeches were registered against him in Delhi. Apart from this, she also came out strongly against the arrest of anti-CAA activist Safura Zargar on charges of UAPA by Delhi Police.

Swara Bhaskar has entertained crores of people with her acting. She did not look back in her life after making her film career with the film Madholal Keep Walking in 2009.

Swara then portrayed Radhika Talwar in the film Guzaarish (2010), Payal Sinha Singh in the film Tanu Weds Manu (2011), Battle Hour Anchor in the film Chillar Party (2011), Suman in the film Aurangzeb (2013), Bindiya in the film Raanjhanaa (2013), Rajkumari Chandrika in the film Prem Ratan Dhan Payo (2015). In the below table we give you all the details of her films.

Swara made her debut in the world of web series by playing the role of Meera in the web series It’s Not That Simple, released on the OTT platform Voot in 2016, after winning the hearts of viewers in the field of film and television.

After this, she presented her powerful acting on Amazon Prime’s web series like Rasbhari, Hello Mini, Flesh, Bhag Beanie Bhag. In the below table we give you all the details of her Web Series.

Swara Bhaskar has won the hearts of crores of Indians on the basis of her brilliant acting. In 2012, she was nominated for 4 awards for her role in the film Tanu Weds Manu with her strong acting and won the Zee Cine Awards for Best Actor in Supporting Role in the female category. She also got the Femina Miss India Woman Award.

In 2014, she was again nominated for 4 Awards for Raanjhanaa Movie, out of which she won Screen Awards in Best Supporting Actress and Zee Cine Awards for Best Actor in Supporting Role in Female category. Apart from this, she has won many awards in her career, the list of which we are giving you in the table below.

Some Interesting Facts About Swara Bhaskar:

This is the full details on Swara Bhaskar Age, Biography, Family, Husband, Net Worth & More. Share this post with your friends and keep visiting us on celebwale.com for famous personalities and trending people’s biography with updated details. If you have any thoughts, experiences, or suggestions regarding this post or our website. you can feel free to share your thought with us.