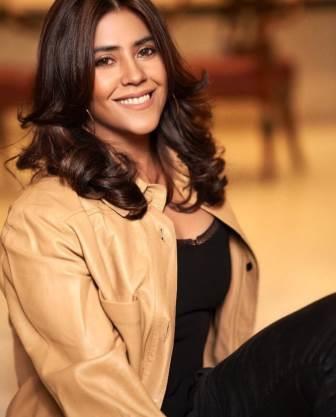 Ekta Kapoor is an Indian television producer, film producer, and director who works in Hindi films and TV soap operas. She is also the Joint Managing Director and Creative Head of Balaji Telefilms. She was born on 7 June 1975 in Bombay, Maharashtra. She did her early education at Bombay Scottish School, Mahim West, Maharashtra. After that obtained a commerce degree from Mithibai College, Mumbai. Ekta started her career at the age of just 17. She was associated with ad and feature filmmaker Kailash Surendranath as an intern.

She later became a producer under her banner Balaji Telefilms after her father’s financial support. However, she did not get success in the beginning and about 6 of his pilot projects were flops due to which she had to bear a loss of about ₹50 lakhs. In 1995, Ekta got her first success with Zee TV’s program Hum Paanch. After that in 2000, Ekta on the advice of an astrologer started adding k alphabets in front of the names of all her serials. In 2000, his first serial Kyunki Saas Bhi Kabhi Bahu Thi, starting with the K alphabet, broke all the records of TRP ratings in TV history.

After this, she made many serials starting with the letter k which included hit television serials like Kahaani Ghar Ghar Ki, Kabhii Sautan Kabhii Sahelii, Kohi Apna Sa, Kaahin Kissii Roz, Kalash, Kasautii Zindagii Kay, Kahiin To Hoga and Kasamh Se. In 2001, she was awarded the title of Best Entrepreneur of the Year. By 2001, she was usually producing more than 30 hours of television serials in a week. 20 out of his 34 serials were listed as the most popular serials which were telecasted on big platforms like Sony TV, Zee TV, Star Plus, and Metro.

Her total turnover from 2000 to 2001 was above ₹35 crores. After establishing herself in the Hindi television industry, Ekta turned to the Tamil television industry. She started the Tamil series Kudumbum which proved to be the biggest hit. She dubbed the Kudumbum series in Telugu and later launched it in Hindi under the name Ghar Ek Mandir. Apart from this, she has also made serials in regional languages ​​like Punjabi, Bengali, Marathi, and Gujarati. Since 2001, instead of getting the scripts of her serials written by a scriptwriter, she writes herself.

She has produced more than 130 Indian television serials, for which she is also called the Queen of Indian Television. Apart from this, Ekta also stepped into the field of Bollywood movie production in 2001 and started with the Bollywood movie Kyo Kii… Main Jhuth Nahin Bolta. During that time she produced Bollywood films like Kucch To Hai, Krishna Cottage, Kyaa Kool Hai Hum, and Shootout at Lokhandwala. In 2022, she continues to launch many shows on Alt Balaji’s digital app of her production Alt Balaji. She has also produced many web series.

Ekta was born in a prosperous Hindu family in Bombay. His family believes in Hinduism and worships Hindu deities. Ekta Kapoor’s father’s name is Jitendra and he has been a well-known Bollywood actor. His mother’s name is Shobha Kapoor. Ekta also has a younger brother Tusshar Kapoor and he is also a Bollywood actor. Her marital status is unmarried but she gave birth to a baby boy named Ravie Kapoor through surrogacy on 27 January 2019.

The total net worth of Ekta Kapoor is more than ₹ 100 crores. She earns more than ₹ 1 crore every month. He also has a luxurious house in Mumbai which is worth more than ₹ 8 crores. She continues to produce many films, serials, and web series in the industry. She has a production house named Alt Balaji. Apart from this, she also has real estate properties abroad. Ekta is also the owner of luxury vehicles like Ford, Mercedes Benz, Audi, and BMW, which are worth crores.

Some Interesting Facts About Ekta Kapoor:

Q. Who is Ekta Kapoor’s husband?

A. Tusshar and Ekta are the brother and sisters and the children of Bollywood actor Jitendra. They never got married and Tusshar became a father opting for surrogacy in the year 2016. His sister adopted the same procedure and become a single mother.

Q. Who is Ekta Kapoor’s father?

Ans. Bollywood Actor Jitendra is the father of Ekta.

Q. How much is Ekta Kapoor’s net worth?

This is the full details on Ekta Kapoor Biography, Age, Height, Father, Family, Husband, Children, Net Worth & More. Please share this post with your friends and keep visiting us on celebwale.com for such an entertaining post. If you have any thoughts, experiences, or suggestions regarding this post or our website. you can feel free to share your thought with us.