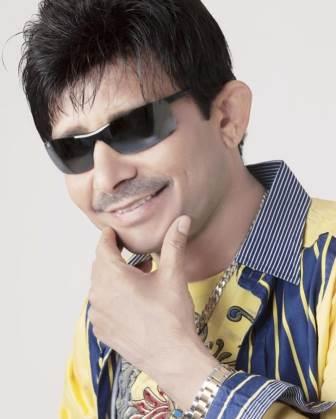 Kamaal R Khan (KRK) is an Indian Actor, Producer, and Critic who is primarily known for reviewing films on his YouTube channel KRK. He was born on 1 January 1975 in Deoband, Uttar Pradesh. Born in a farming family, he used to work in the fields with his father at a very young age. At the age of 8, he dreamed of going to Mumbai to become an actor.

Although his parents did not agree with him, so he went to Dubai where he started working as a technician. After living in Dubai for a few years, he moved to Mumbai and started working in small Hindi and Bhojpuri films. He started his career in the industry by producing the film Sitam released in 2005. The next year, he made his debut in films by playing the role of Villain in the Bhojpuri film Munna Pandey Berozgaar released in 2006.

He was also the producer of that film. His next film was Deshdrohi released in 2008 in which he played the role of Raja Yadav. This film is the biggest flop film ever in Bollywood history. The film was banned from being released in Maharashtra due to the possibility of rioting. He was last seen playing the role of Brijesh in the 2014 Bollywood film Ek Villain.

KRK was involved in Colors TV’s popular show Bigg Boss as a contestant in 2009 where he used to have clashed with other contestants of Bigg Boss. He used to throw things here and there in the Bigg Boss house and used to abuse other celebrities a lot. According to the website Tele Chakkar, he is bald and he wears a wig to cover his head.

He has also worked in music videos like Tum Meri Ho and Pyar Ka Naam Khuda Rakkha Hai. Now he automatically addresses himself as India’s No 1 critic KRK who gave negative reviews of newly released Bollywood movies on his YouTube channel.

Kamal R Khan aka KRK is involved in some controversy every day. Recently her dispute with Bollywood actor Salman Khan has come to the fore. Let us tell you that a defamation case was filed against KRK on behalf of Salman Khan.

After legal action, it was found that the case is done by Salman Khan on KRK for calling him corrupt and making all the wrong allegations and maligning his image. Similarly, every day Kamal Khan is seen taking a jibe at someone or the other due to his arrogance.

Earlier, he had made objectionable remarks about actress Sonakshi Sinha. Sunny Leone once filed a complaint against KRK at the police station.

After the death of Rishi Kapoor and Irrfan Khan, an FIR was registered against KRK for his controversial remarks in Bandra, Mumbai. Regarding Rishi Kapoor, he tweeted on April 30 last year and said, “Sir, come back well! Don’t go out! Because the liquor shop is about to open after just two-three days.”

Kamaal R Khan’s (KRK) age is 48 years old in the year 2023 and he remains in discussions due to his controversies. KRK looks very fit even at this stage of age. He does outdoor activities like cycling and walking daily to maintain his fitness.

Kamaal R Khan’s height is 5 feet 5 inches, which is equal to 165 centimeters. KRK’s body weight is about 75 kg, he takes a proper diet to keep his body fit so his body measurement is 38-30-12. His eye color is Black, and his hair color is also Black.

Kamal Rashid Khan was born in a simple Muslim family in Deoband, Saharanpur. His entire family believes in Islam and also prays to Allah. Kamaal R Khan’s (KRK) parents’ name is not known. More recently, in 2020, his mother died at the age of 78. No information about his siblings is also available on the internet.

His marital status is married. KRK married Anita Kumar, a Hindu girl who grew up in Mumbai. Kamal R Khan also has 2 children in which whose elder son’s name is Faisal Mohammed Rashid Kamal and her younger daughter’s name is Farah Rashid Kamal.

Kamaal R Khan’s (KRK) wife’s name is Anita Kumar. There are also rumors on social media that he has done 4 marriages in his life and got divorced from 3 wives. His fourth wife is Anita Kumar with whom he lives in Dubai. Now only they know better how much truth there is in all these rumors.

Kamaal R Khan’s (KRK) total net worth is more than ₹52 crores. He earns lakhs of rupees a month from his uploaded videos on YouTube. Apart from this, he has a business of garments and he also supplies to laborers in the Gulf countries, from which he earns good money as a commission. KRK has a luxurious house located in Versova, Mumbai. He also has a luxurious bungalow in Dubai in which he has been living since the time of lockdown.

Que. Who is known as KRK?

Ans. KRK aka Kamaal Rashid Khan is a former Bollywood actor, producer, and film critic who is always in discussion about his controversial tweets.

Que. Who was Kamal Khan?

Ans. Kamaal Khan’s full name is Kamaal Rashid Khan and he is better known as KRK. He’s a former Bollywood actor and also a self-declared No.1 film critic in India.

Que. What is the age of KRK?

This is the full details on Kamaal R Khan (KRK) Biography, Age, Height, Father, Family, Wife, Net Worth & More. Share this post with your friends and keep visiting us on celebwale.com for famous personalities and trending people’s biography with updated details. If you have any thoughts, experiences, or suggestions regarding this post or our website. you can feel free to share your thought with us.