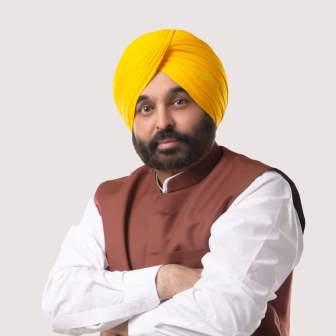 Bhagwant Singh Mann is a politician and comedian from Punjab. Aam Aadmi Party’s leader Bhagwant Mann has won the Lok Sabha elections from his constituency Sangrur for the second time in a row. He was born on 17 October 1973 in Satoj village of Sangrur district of Punjab.

His house name is Jugnu. He completed his early studies in the Sangrur district itself. Then for his graduation, he enrolled in Shaheed Udham Singh Government College located in Sunam. From there, only he could complete his studies till the first year of B.Com, after which he started his career as a comedian by saying goodbye to his studies.

During his B.Com first-year studies, he participated in youth comedy festivals and inter-college competitions organized at Punjabi University, Patiala where he made everyone laugh with his comedy. For this vigorous comedy, he also won 2 gold for his college, Shaheed Udham Singh.

After dropping out of their studies, he continued to develop his art of comedy over politics, sports, and business. He later debuted with his comedy album Jugnu Kehnda Hai in collaboration with comedian Jagtar Jaggi. In the year 1992, he joined the Creative Music Company, after which he did many shows. He remained active in discography till the year 2013.

Apart from this, in the year 1994, he started his film career with the film Kachahari, after which he worked in more than 18 films till 2018. During his comedy journey, he appeared in Star Plus’s famous comedy show The Great Indian Laughter Challenge in 2005 along with famous comedian Kapil Sharma.

After that, till 2012-14, Mann was associated with the People’s Party of Punjab, which is headed by Manpreet Singh Badal. He contested the elections in the year 2012 while in the same party where he had to face defeat.

In 2014, he joined Arvind Kejriwal’s Aam Aadmi Party and started his successful political career. In May 2014, he contested the Lok Sabha elections in Punjab’s Sangrur constituency on an Aam Aadmi Party ticket and became an MP defeating an Akali Dal leader by over 2 lakh votes.

After this, retaining his seat in the 2019 Lok Sabha elections, he became MP from Sangrur for the second time by winning by 1 lakh 11 thousand 111 votes against the leader of the People’s Party.

Bhagwant Mann’s age is 48 years old in the year 2022. He is a well-known politician of the Aam Aadmi Party who is also the chief ministerial face in the Punjab Assembly elections 2022. He does yoga to maintain his fitness so that he can keep his body healthy.

Bhagwant Mann’s height is 5 feet 6 inches, which is equal to 168 centimeters. his body weight is about 65 kg, he takes a proper diet to keep his body fit so that his body measurement is 38-30-12. His eye color is Brown, and his hair color is also Black.

Mann was born in a middle-class Jat Sikh family. His entire family believes in Sikhism and has sincere reverence for the Guru of Sikhs, Waheguru.

Bhagwant Mann’s father’s name is Mohinder Singh who died sometime back. His father Mohinder Singh was a government teacher and was very interested in politics. Her mother’s name is Harpal Kaur. Apart from his parents in Bhagwant’s house, there is also a younger sister named Manpreet Kaur and who works in a private school in Patiala.

His marital status is divorced. Bhagwant Mann had married Inderpreet Kaur but their marriage did not last long and in the year 2015, both of them separated. Inderpreet Kaur gave birth to a son and a daughter. Bhagwant Mann’s wife Indrapreet Mann lives in America with her two children after separating from her husband.

Bhagwant Mann and Inderpreet Kaur parted ways in 2015. The children have been living with their mother since their separation. His wife hails from Ludhiana and currently resides in the US with their younger son Dilshan Mann (17 years) and their elder daughter Seerat Kaur Mann (21 years).

Bhagwant Mann is once again in discussions about his marriage. This time he is going to do his second marriage. According to media reports, he will marry Dr. Gurpreet Kaur on Thursday, July 7, 2022, in Chandigarh. His first wife Inderjit Kaur and children live in America. Dr. Gurpreet Kaur will be the second wife of the Punjab CM Bhagwant Mann.

The net worth of Bhagwant Mann is around ₹5 crore which includes both his movable and immovable assets. In the election affidavit of 2019, he had told that he has total assets of ₹16,427,274 and there is no liability.

Apart from this, he has about 95 grams of gold, whose value was then estimated to be more than lakhs of the rupee. He also has a licensed gun which costs around ₹20000. Similarly, he has commercial assets worth ₹51 lakh and cultivable land worth ₹75 lakh.

Some Interesting Facts About Bhagwant Mann:

This is the full details on Bhagwant Mann Age, Wife, Cast, Family, Biography, Politician, Net Worth & More. Please share this post with your friends and keep visiting us on celebwale.com for famous personalities and trending people’s biography with updated details. If you have any thoughts, experiences, or suggestions regarding this post or our website. you can feel free to share your thought with us.