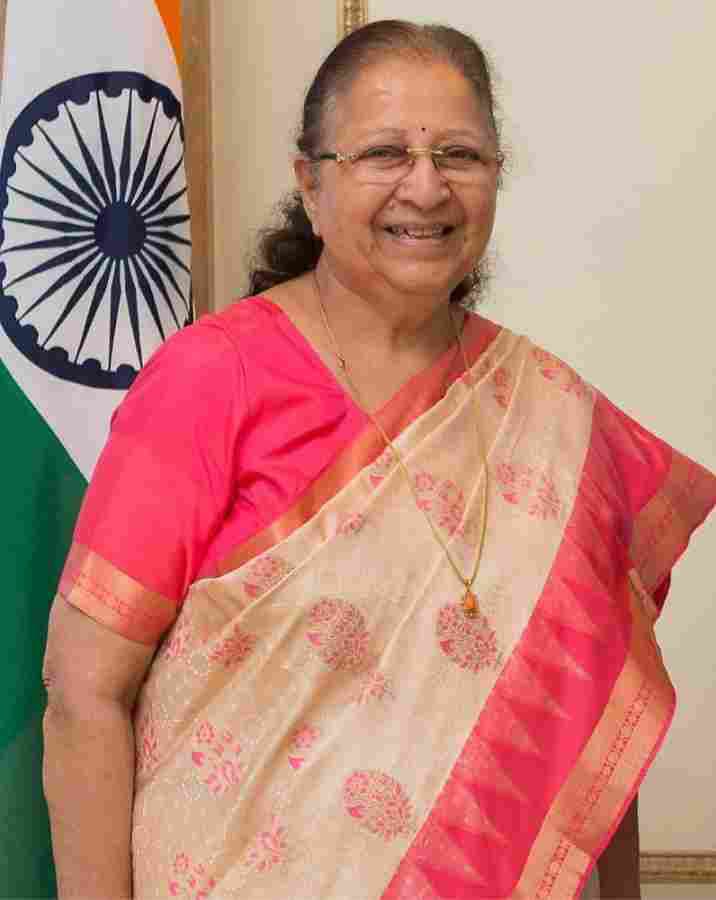 Sumitra Mahajan was born on 12 April 1943 in Chiplun, District Ratnagiri, Maharashtra. She is popularly known as Tai amongst the people of Indore and Malwa. She did her schooling in Ratnagiri, Maharashtra. She got her degree in Bachelor of Arts (B.A.). Thereafter, She got married on January 29 1965 to a well-known lawyer of Indore, Jayant Mahajan.

After married She shifted to Indore, Madhya Pradesh with her husband As far as her higher education is concerned, She finished her higher education with M.A. and LLB  from Indore University which is now known as Devi Ahilya Vishwavidyalaya. She faced a lot of struggles after finishing her education in law. During the struggle phase, her family member always stood by her.

She got inspiration from Ahilyabai Holkar and wrote a book on her life’s journey Matoshri which was unveiled by PM Modi in 2017. Since childhood, She had a strong desire to do something worthwhile for society and the nation. This was one of the reasons why She entered into politics. When She started her political journey, she received a lot of appreciation from the public because of her humble nature.

She belongs to the Bhartiya Janata Party. In 1982 for the first time, she became the mayor of Indore. In 1989, She fought an election from the Indore constituency against senior Congress leader and ex-chief minister of Madhya Pradesh Prakash Chandra Sethi and defeated him. Thereafter, She won consecutively 8 times from the Indore Mahasabha seat. She is the first lady who has won 8 times consecutively from the same seat.

Despite her busyness in political life, She never forgets to fulfill her responsibilities in family life. Even today, She begins her day by offering water to Sun and the Holy basil plant. She and controversy have always been the two different poles, however, a scam took place in Maharashtra cooperative Bank between 1997 and 2003 in which her name and her son’s name came to light.

Sumitra Mahajan is a famous woman politician of the Bharatiya Janata Party. She is one of the most senior members of the Indian Parliament, winning consecutive Lok Sabha elections since 1989. She has won eight consecutive elections in the Indore constituency of Madhya Pradesh. She is known for supporting and supporting many cultural organizations and forums that promote literary activities.

She has the unique distinction of being the only woman member of Parliament to be elected eight times in a row from the same Constituent Assembly of the Lok Sabha. In 2014, Sumitra Mahajan was elected to the Lok Sabha for the eighth time, becoming one of the three members of the Lok Sabha to do so, and currently the longest-serving female member. Sumitra is known for simplicity, honesty, and clean politics.

She has a clean track record and has always kept his distance from the Special Interest Group. Apart from this, she had taken the important step of suspending 25 Congress MPs from the House for five days (August 2015) for indiscipline in the House. Sumitra Mahajan had spent transparency with regional development by not only getting the MP fund but also the surrender amount of other areas and the state.

Tai did not publicize the work done with this amount, because she believed that this work is inherent in the duties of the MP. Sumitra Ji retired from electoral politics in 2019. Sumitra Mahajan is currently unhealthy during the year 2021 due to the rising corona epidemic in India. Following her complaint about health, she has been admitted to Bombay Hospital in Mumbai, where her corona has also been examined, in which her corona report on Thursday 22 April 2021 has been negative.

She has a mild fever and her health is improving rapidly. But rumors also spread on social media about her health, in which fake news of her death was spread on social media. The victim of this fake news also became veteran Congress leader Shashi Tharoor, who tweeted on the micro-blogging site Twitter and also paid tribute to him and expressed his condolences to his family.

But as soon as fake news was revealed, he immediately deleted his tweet from his Twitter handle. The same Sumitra Mahajan’s younger son Mandar Mahajan said that her mother is well and she is still alive. He further explained that the news going on on social media is completely wrong. Sumitra Mahajan was also awarded Padma Bhushan by the Government of India in 2021.

Sumitra Mahajan’s age is 78 years old in 2021 and she was a famous woman politician of the Bharatiya Janata Party. She also takes healthy food to keep maintain her health. Sumitra Mahajan’s height is 5 feet 5 inches, which is 165 cm. Her body weight is 75 kg. Her eye color is black and her hair color is white.

Sumitra Mahajan was born into an ordinary Hindu Brahmin family and her gotra is Gautam. She worships Hindu deities and believes in Hindu religion and customs. Sumitra Mahajan’s father’s name was the late Shri Purushottam Neelkanth Sathe, who was a Sangh Pracharak in Maharashtra, and her mother’s name was the late Shrimati Usha Devi, who was a housewife.

In Sumitra’s house, information about her siblings, apart from her parents, is not available on the Internet. Sumitra was married to a well-known lawyer in Indore in just 22 years. After her marriage, she came to Indore as a daughter-in-law. Sumitra Mahajan’s marital status is married and her husband’s name is Late Shri Jayant Mahajan, who is a famous lawyer. She also has two sons named Milind and Mandar.

Her first son Milind Mahajan is an IT Professionalist and also does business. Sumitra Ji’s second son’s name is Mandhar Mahajan, who is a commercial pilot.

After finishing graduation, she was married to a well-known lawyer in Indore at the age of 22, after which she got married and shifted to Indore, Madhya Pradesh. After shifting to Indore, Sumitra Ji got her M.A. from Indore University and had a post-graduation degree in LLB.

Talking about the net worth of Sumitra Mahajan, according to sources, she was the former speaker of Lok Sabha and her salary is approximately ₹2.50 lakh and her total net worth is 1.52 crores

Sumitra Ji is the former speaker of Lok Sabha and she has verified an account on the micro-blogging website Twitter, where she has 345k followers. Sumitra Ji is also covered by Wikipedia. Below we are sharing the links of all their social media accounts with you, by clicking on which you will be able to access their profile directly. Here we also give the Sumitra Mahajan office address and her home Indore address.

Some Interesting Facts About Sumitra Mahajan:

This is the full details on Sumitra Mahajan Biography, Wiki, Age, Height, Family, Husband, Son, Lok Sabha Speaker, Net Worth & More. Share this post with your friends and keep visiting us on celebwale.com for famous personalities and trending people’s biography with updated details. If you have any thoughts, experiences, or suggestions regarding this post or our website. you can feel free to share your thought with us.