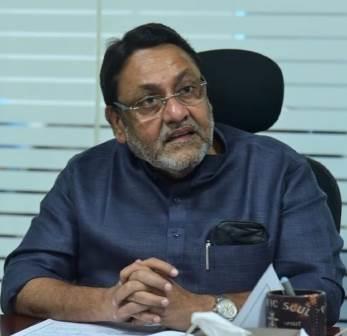 Nawab Malik is an Indian politician and a cabinet minister in the Government of Maharashtra who is considered a popular Muslim face in the NCP party. He is the Cabinet Minister for Minorities, Skill Development and Entrepreneurship Department in the Government of Maharashtra and is one of the leaders close to NCP president Sharad Pawar. Malik is originally from Uttar Pradesh.

He was born on 20 June 1959 in Dhuswa village of Utraula Tehsil area of ​​Balrampur district of Uttar Pradesh. His entire family shifted from UP to Mumbai in 1970. He studied 10th at Anjuman High School in Mumbai and then 12th at Burhani College in 1978. In 1979, enrolled in the same Burhani college for graduation with (B.A.). But due to a lack of interest in his studies, he left his study and helped his father to start a scrap sales business.

Later, he started his career in his father’s business, but in the meantime his interest in politics increased, then he jumped into the field of politics. Malik then entered politics with the party “Sanjay Vichar Manch” started by Maneka Gandhi. He first contested the Lok Sabha elections in 1984 against Congress veteran Gurdas Kamat, but could hardly garner only 2500 votes.

In 1995, when the Lord Ram temple movement started in the country in the ’90s, the popularity of Samajwadi Party (SP) President Mulayam Singh Yadav, who was vocal against the construction of the Lord Ram temple in Ayodhya, grew rapidly in the minority community. At the time of the demolition of the Babri structure in Ayodhya on 6 December 1992, the Congress government was at the center (Delhi).

Because of the Babri incident, minorities across the country were very angry with Congress and as an alternative, Muslims chose the Samajwadi Party. Seeing the growing popularity of Mulayam Singh among Muslims, Nawab Malik also started his political journey with SP. He tried his luck for the first time on an SP ticket in the 1994 by-election in the Muslim-dominated Nehru Nagar seat of Maharashtra and reached the assembly by winning.

After this, he was counted among the leaders close to Mulayam, and in the 1999 assembly elections again tried his luck on the SP ticket from the Nehru Nagar seat and won. After the UPA government came to the center in the 2004 Lok Sabha elections, Nawab Malik left the SP after the political altercation with SP state president Abu Asim Azami and joined Sharad Pawar’s NCP party. After this, he landed the Nehru Nagar seat in the 2004 assembly elections on an NCP ticket and scored a hat-trick of victory.

Nawab Malik was made a minister in the Maharashtra government from the NCP quota when Shiv Sena, Congress, and NCP formed an alliance. In 2020, Malik was also made the president of NCP Mumbai and is considered very close to NCP chief Sharad Pawar.

Malik was born in a Muslim family in Balrampur, Uttar Pradesh. In the decade of 1970, his family shifted from Uttar Pradesh to Mumbai. His father Malik Mohammad Islam used to do the business of buying and selling Scrap. Later Nawab Malik also left his college education midway and joined his father’s scrap business, due to which some people sometimes tried to humiliate him by calling him a scrap dealer (Kabadiwala).

Malik’s mother’s name is not known. Apart from the parents, the information about his siblings is not available on internet media. Talking about his marital status, he is married. Nawab Malik was married to Mehjabeen Malik on 9 January 1981 and he is also the father of 4 children.

They have 2 sons named Faraj and Aamir. One of his sons is a lawyer. Malik also has 2 daughters named Nilofar Malik Khan and Sana Malik Shaikh. Nawab Malik’s son-in-law’s name is Sameer Khan. Sameer Khan is the husband of her elder daughter Nilofar.

Talking about the total net worth of Nawab Malik, his net worth is around ₹9 crores in total. In the 2015 Lok Sabha elections, he had declared his income to be around ₹5 crores. Now in 2022, his total assets have increased by an estimated ₹4 crores.

He is a member of the Legislative Assembly, as a result of which he receives a salary of ₹3.30 lakh per month from the government. Apart from this, he has many businesses from which he earns lakhs of rupees every month.

Malik’s account is present on all social media platforms where he keeps sharing his photos with his followers. Malik is present on Instagram where he has more than 45k followers and his number of posts is more than 3k. He is also present on Facebook where he is followed by more than 220k people. Wikipedia has also covered Nawab Malik on his page.

Apart from this, he is also present on Twitter where he keeps sharing his thoughts with his 361k followers. In the table below, we have shared the links to all his social media profiles with you. By clicking on it you will be able to access their profile page directly.

Nawab Malik, Minority Welfare Minister in the Maharashtra Government and spokesperson of the Nationalist Congress Party, was arrested by the Enforcement Directorate (ED) on 23 February 2022 after interrogation and taken into custody till 3 March 2022. On the morning of February 23, he was taken to the ED’s office for questioning. According to sources, he was unable to give satisfactory answers to many questions, after which the ED arrested him after coming out of the office.

Malik is accused of connection with the underworld don Dawood Ibrahim. Underworld don Dawood Ibrahim’s brother Iqbal Kaskar had named Nawab Malik during his interrogation by the ED. After this, the ED called him for questioning, after which he was arrested. Apart from this, he is accused of having a business relationship with Salim Patel, who is considered close to Haseena Parkar.

Earlier, Nawab Malik was embroiled in controversies by targeting a senior Narcotics Control Bureau (NCB) officer Sameer Wankhede on a personal level. He was behind Sameer Wankhede ever since Wankhede busted a drug party on a cruise and arrested Aryan Khan, son of Bollywood actor Shah Rukh Khan.

He also made public comments questioning Sameer Wankhede’s religion and also shared private pictures of his sister on social media. He has had this enmity with Wankhede ever since Wankhede had arrested his son-in-law Sameer Khan on drug charges, due to which Sameer had to spend about 8 months in jail.

Some Interesting Facts About Nawab Malik:

Que. Who is Nawab Malik in Mumbai?

Ans. Nawab Malik is an Indian politician and a cabinet minister in the Government of Maharashtra who is considered a popular Muslim face in the NCP party.

Que. How old is Nawab Malik?

This is the latest information on Nawab Malik Family, Wife, Biography, Age, Religion, Net Worth & More. Share this post with your friends and keep visiting us on celebwale.com for famous personalities and trending people’s biography with updated details. If you have any thoughts, experiences, or suggestions regarding this post or our website. you can feel free to share your thought with us.