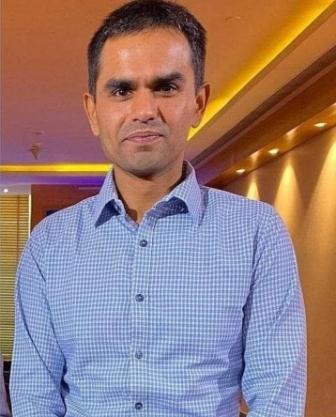 Sameer Wankhede is an employee of the Government of India who is currently working on the post of Zonal Director in the Narcotics Control Bureau Department. Apart from this, he is also a Mumbai-based entrepreneur and Indian Revenue Service (IRS) Officer.

Sameer was born on December 14, 1979, in Mumbai, Maharashtra. He received his early education in Mumbai. After this, he also achieved a Bachelor of Arts (BA) degree in history. He was very good in his study, due to which he decided to prepare for the Union Public Service Commission (UPSC) entrance examination. By proving his decision right and passed the UPSC examination in 2008 with hard work and passion.

After passing the UPSC examination, he was appointed to the post of Indian Revenue Officer (IRS) for the first time.

After this, Sameer served his services as a deputy commissioner of the Air Intelligence Unit (AIU) at Mumbai Airport in the early days of his career. Sameer, while serving as a customs officer in the customs department at the Mumbai airport, made sure that any person bringing in goods from another country pays the tax on each item. He was known to not give clearance to any person or celebrity until he paid the tax on foreign goods.

In the year 2010, Wankhede had served his services in the Maharashtra Service Tax Department, when he had registered a case against 2000 people, including 200 celebrities, for tax evasion, his bold move was also highly appreciated and Wankhede cleared the case. The total revenue of the government had increased by more than ₹87 crores.

After this, in 2013, when Indian pop singer Mika Singh was returning from Bangkok, he was stopped by the Wankhede at the airport itself. During the checking, foreign currency worth $ 11000 was received from Mika Singh, apart from this, he also had a bottle of liquor worth more than $ 1000. Under customs rules, an Indian coming from abroad has to make a declaration if he holds more than $5,000 in foreign currency.

Due to this, Mika was kept in custody for about 4 hours, later he got bail on a fine of ₹1 lakh. After Sameer was made deputy commissioner in the Air Intelligence Unit, he was posted as additional SP in the National Investigation Agency (NIA). Then later he was also given the post of Joint Commissioner in the Directorate of Revenue Intelligence (DRI).

After Joint Commissioner in DRI, Wankhede was appointed as Zonal Director of Narcotics Control Bureau (NCB). After becoming the Zonal Director in the Department of Narcotics, he is in full form and has so far seized consignments of drugs worth more than ₹17000 crores.

Apart from this, he has also raided the properties of big Bollywood celebrities like Anurag Kashyap, Vivek Oberoi, and Ram Gopal Varma. After this, when the angle of the drug case came to the fore in the suicide case of Bollywood actor Sushant Singh Rajput, the NCB started investigating the entire case in which many drug peddlers were raided and caught.

After the drug peddlers were caught, the names of many Bollywood celebrities started appearing, after which the NCB summoned everyone and called for questioning and also took many into custody.

Apart from this, Sameer Wankhede himself had summoned some the actors and actresses, including Riya Chakraborty, Deepika Padukone, Rakul Preet Singh, Sarah Ali Khan, associated with the Bollywood drug nexus, and interrogated them.

After this, in November 2020, NCB arrested comedian Bharti Singh and her husband Harsh for possessing and consuming cannabis. He was arrested under the Narcotic Drugs and Psychotropic Substances Act. Later, NCB searched Bharti’s house where 86 grams of cannabis was found and during interrogation, Bharti and his husband had also confessed to taking drugs.

The NCB then intensified the raids in Mumbai by tightening the noose, in which Wankhede and his team arrested 25-year-old drug supplier Harris Khan, working in the area around Bandra Reclamation, Mumbai. After interrogating Harris, NCB got information that he used to work for Dawood Ibrahim’s aide Chinku Pathan.

Harris has more than 21 criminal cases registered against him, including murder, kidnapping, and intimidation. In June 2021, NCB raided a bakery shop in Malad on the basis of information received during interrogation where they seized 10 cannabis-based brownie cakes and 35 grams of marijuana.

In that raid, NCB took 3 accused including a woman and drug supplier Jagat Chaurasia in its custody. During the raid at the house of accused Jagat, Sameer and his team had recovered 125 grams of patients. During their swift raid, NCB arrested 25-year-old professional psychologist Rahmin Charaniya during another raid in July 2021 where he was selling a mixed brownie pack of hashish, ganja, and charas.

The NCB had recovered around 14 kg hash brownies, 350 grams of opium, and ₹1.7 lakh cash from his house. NCB had arrested Shahrukh Khan’s son Aryan Khan from Cordelia Cruises going from Mumbai to Goa at a cruise drug party on 3 October 2021. In this drug case, NCB had seized cocaine, hashish, MD, and many other drugs.

However, after Aryan’s arrest, many people raised questions on NCB that NCB is simply targeting the Bollywood industry and celebrities and is conspiring to defame them, after which NCB’s Zonal Director Sameer Wankhede said in the media that.

“We are doing our job. There is a rule and it should be followed by everyone. It is the same for all. Everyone is equal in front of the law and just because someone is famous we should let them go free. Why should celebrities don’t follow those rules and why should they walk away scot-free? Famous doesn’t give them the right to violate the rules?

If we see a famous person breaking the law, we shouldn’t do anything about it? Should I only run after the drug peddlers and conduct my operations and raids in slums alone? This year we’ve made more than 310 arrests. How many of those are celebrities? We’ve seized illegal substances worth Rs 150 crores this year. Has anyone spoken about that?”

Sameer Wankhede’s height is 5 feet 10 inches, which is equal to 179 centimeters. His body weight is about 65 kg, he takes a proper diet to keep his body fit so that his body measurement is 34-28-10. His eye color is Black, and his hair color is also Black.

Sameer Wankhede was born in a middle-class Dalit Marathi family. He and his father believe in Hinduism and also worship Hindu gods and goddesses. Sameer’s mother Late Zaheda Wankhede was a Muslim and she died about 6 years ago due to some reason.

Sameer Wankhede’s father’s name is Dnyandeo Kachurji Wankhede. He was a former police officer who worked in the Maharashtra Police Department and has now retired from his post. Apart from his father in Sameer’s house, there is also a sister named Yasmeen Wankhede and she is a criminal lawyer.

Talking about Sameer’s marital status, he is married. He has done not one but two marriages in his life. Sameer Wankhede’s first wife’s name is Dr. Shabana Qureshi, whom he married on 12 November 2006 and later got divorced in the year 2016 due to some reason. Sameer also has a son named Athier Wankhede from his first wife Shabana Qureshi.

After getting divorced from his first wife, Sameer’s closeness with Marathi television actress Kranti Redkar started growing, and later both of them got married. Thus Kranti Redkar became the second wife of Sameer Wankhede and they both got married on 29 March 2017. Sameer and Kranti also have 2 twin daughters and their names are Zyda and Ziya.

Talking about the total net worth of Sameer Wankhede, the information about his net worth is not yet available. Sameer is a government employee who works for the central government. He is working as Zonal Director in Narcotics Control Bureau. If we talk about his salary, then he gets a salary of about ₹80k per month. Apart from this, he is also a businessman in Mumbai.

Sameer Wankhede’s account is present on Twitter and Instagram except for Facebook. Although he is not very active in both places. Sameer has about 8k followers on his Instagram account and he has shared only 2 posts so far. He also has 12k followers on his Twitter account. Wikipedia has not covered Sameer on their page yet. In the table below, we have shared the links of all his social media profiles with you, by clicking on which you will be able to access his profile page directly.

Ever since Sameer Wankhede arrested Bollywood actor Shah Rukh Khan’s son Aryan Khan in a cruise drug case, he has been seen embroiled in controversies. On the other hand, Nawab Malik, a minister in the Maharashtra government, is attacking him one after the other.

He claimed that he belonged to the Muslim religion and had married Dr. Shaheeda Qureshi in his first marriage according to Muslim customs, where his name on his marriage certificate was Sameer Dawood Wankhede. After the allegations of Malik, four officers of NCB Delhi have come to Mumbai to investigate these allegations leveled by Nawab Malik on Sameer Wankhede.

On the other hand, Sameer’s family has denied these allegations made by NCP leader Nawab Malik. Sameer’s father Dnyandeo told that he is a Hindu by birth and has been following Hindu customs since birth. Sameer’s second wife Kranti Redkar has also denied Nawab Malik’s allegations.

She said that Sameer’s entire family, relatives, grandfather’s great-grandfather are all Hindus and believe in Hinduism and worship Hindu gods and goddesses. She further said that the NCP leader is conspiring to defame his family by making false allegations. Apart from this, she has also appealed to Maharashtra Chief Minister Uddhav Thackeray for justice.

Some Interesting Fact About Sameer Wankhede:

This is the full details on Sameer Wankhede Biography, Wiki, Age, Family, First Wife, 2nd Wife, Caste, Real Name, Controversy, Net Worth & More. Share this post with your friends and keep visiting us on celebwale.com for famous personalities and trending people’s biography with updated details. If you have any thoughts, experiences, or suggestions regarding this post or our website. you can feel free to share your thought with us.