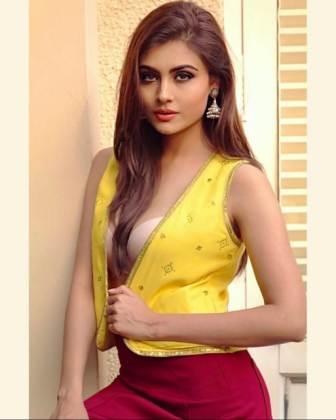 Malti Chahar is an Indian television and film actress who is known for working in the television and film industry. She is also the elder sister of famous cricketer Deepak Chahar. She first went viral on social media when she was seen dancing along with her brother Deepak to their famous song Run D World with Dwayne Bravo.

Malti was born on 15 November 1990 in Agra, Uttar Pradesh where she grew up with his younger brother Deepak Chahar and cousin Rahul Chahar. She did her childhood education at Kendriya Vidyalaya School in Agra. She was very ahead in sports since childhood.

Continuing her further studies, she holds a B.Tech degree in Software Engineering from the Institute of Engineering and Technology (IET) College, Lucknow. She has also been a high jump national-level player during her college days. After finishing college, she turned to model, and in the year 2009, Malti won the title of Miss India Earth 2009.

After this, she was the 2nd runner up in Femina Miss India Delhi 2014 in the year 2014. She then appeared in television ads for brands like Visaka Vboard, Dabur Red Toothpaste, and Ossum Body Mist. In the year 2017, she made her debut in the film industry from the film Manicure. After this, he did the web series Latesmary[.]Com and gave an excellent performance.

She is very excited to enter Tamil film and television series. In the Tamil film industry, she is excited to work with Gautham Menon and S.Rajamouli. Also, she aspires to work with superhit actors Suriya and Prabhas once in her whole life.

Now whether this wish is fulfilled or not, only time will tell. But for the time being, she will soon be seen in Bollywood film Genius with actors Nawazuddin Siddiqui and Mithun Chakraborty. This film will be released on the big screen soon.

Malti Chahar’s age is 30 years old in the year 2021. She is quite popular on social media for her glamorous look. To maintain it, she regularly resorts to exercise and yoga.

Malti was born in a prosperous Hindu family. She believes in Hinduism and also worships Hindu deities. Malti Chahar’s father’s name is Lokendra Singh Chahar and he was employed in the Indian Air Force. His father later resigned from his job to get Deepak trained in cricket.

Both the brothers of Malti are very good cricketers who have impressed everyone with their performance. Malti grew up with these two brothers. Talking about Malti’s marital status, she is still unmarried and she is not having any affair with anyone.

Due to which the name of her boyfriend is not yet known. But recently Malti’s younger brother Deepak has proposed to his girlfriend Jaya Bhardwaj on live TV and has also given her a ring. Malti also shared this news through her social media and wrote that Lo Mil Gayi Bhabhi.. Delhi Ki hai.. Nam Hai Jaya Bharadwaj.

Talking about the total net worth of Malti Chahar, her Net Worth is around ₹1 crore. The main source of her earnings is to act in Films and Web Series. Apart from this, she keeps sharing sponsors from her social media account for which she takes good money and also does some television ads.

Malti Chahar’s account is present on all social media platforms where she shares her latest photos with fans. She is widely followed on social media due to her style and glamorous photos. She is very active on her Instagram account where she is followed by more than 586k people and the number of her post is above 350.

She is also covered by Wikipedia on its page and has more than 37k followers on her Twitter account. In the table below, we have shared the links of all their social media profiles with you, by clicking on which you will be able to access their profile page directly.

Some Interesting Fact About Malti Chahar:

This is the full details on Malti Chahar Wikipedia, Biography, Age, Height, Father, Family, Husband, Brother, Ad, Movie, Education, IPL 2021, Net Worth & More. Share this post with your friends and keep visiting us on celebwale.com for famous personalities and trending people’s biography with updated details. If you have any thoughts, experiences, or suggestions regarding this post or our website. you can feel free to share your thought with us.