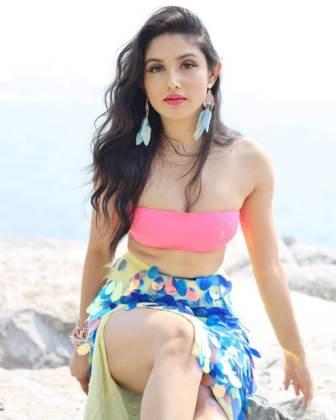 Donal Bisht is an Indian TV actress and model best known for her role as Ishika Patel in the TV serial Roop: Mard Ka Naya Swaroop. She was born on 27 August 1994 in Alwar, Rajasthan. She had completed her schooling in Alwar, Rajasthan after which his family shifted to Delhi. In Delhi, she got her graduation degree by taking admission to a college. Donal started modeling in her college days. She then worked as a journalist for a news channel and also anchored for Chitrahaar, which aired on Doordarshan.

Donal had a lot of interest in acting since childhood. She often used to act in front of her mirror and dance by closing the doors of her room. Donal’s journey to becoming an actress was not that easy. At the behest of her parents, she studied journalism at the Media College, after which she fulfilled the dream of his parents by anchoring herself in Chitrahaar. After that Donal convinced her parents saying that look, I have fulfilled your dreams by anchoring. Now I want to go to Mumbai to fulfill my dream and want to become an actress.

But even after this, his parents did not agree. Then she lay in her office and asked the boss to transfer him to Mumbai as her entire family is shifting to Mumbai. After this, his boss transferred him to Mumbai within 1 month. Thus she reached Mumbai. Donal used to work as a Bollywood reporter in her Mumbai office. One day she got a chance to interview Sonali Bendre and she came to interview him. During that time, Star Plus’s senior’s eyes fell on Donal and he felt that Donal is an actress. After which he talked to his PR team, then the call from PR came to Donal.

Donal had to face a lot of difficulties in speaking the dialogues in the auditions as Siya Ke Ram was a mythological show which required speaking very pure and difficult Hindi. After this, she got a chance to give many more auditions for different shows. She kept on auditioning for months, after which she got a chance to do a cameo role as a journalist in the Star Plus show Airlines. She played the character of Dr. Shaily in the show Twist Wala Love in the same year. Donal got her first break from the Life OK serial Kalash Ek Vishwas in which she played the character of Sakshi.

In the year 2019, she was placed at number 18 in the list of Top 20 Most Desirable Women on TV by Times of India. Apart from this, she has done photoshoots for many brands like SpiceJet, Raka, and MTNL. She revealed the first look of her first music video Bepata on 14 February 2020 which was sung by Abhijit Vaghani. Later, the song was released on 20th February 2020.

Donal Bisht’s age is just 28 years old in the year 2023. Within a few years, she has included herself among the best and most beautiful actresses in the TV industry. Donal has maintained her figure in a great way even without a gym. She enjoys working hard in the acting workshops but she does not want to work hard in the gym at all. Although she occasionally goes to the gym to exercise, this happens very rarely. Donal had told in an interview that she does not like to work hard in the gym, but she enjoys doing yoga. Yoga not only keeps you fit but also gives you mental peace.

But working out in the gym has an immediate effect on your body. Although this happens with yoga too, but it takes time. Although Donal has many asanas in yoga, but she loves doing Surya Namaskar. Belly fat is also very less with Suryanamaskar. Apart from this, crunches and planks are also beneficial for the body. Donal further said that when she gets a little bored with yoga and wants to work hard, she performs crunches and planks. Doing planks also gives good results and doing it affects the whole body. Apart from this, Donal likes to do Anulom Vilom, by doing this her skin remains good.

She carries a stretching band with her at all times and sometimes does stretching with the help of it on the sets or sometimes in the vanity van. She always feels active by stretching every few times. Apart from this, she also does squats and pushups. Donal Bisht also takes special care of his diet and mostly consumes green vegetables only. She also consumes fruit juices daily so that her body can remain healthy. Donal Bisht’s height is 5 feet 5 inches, which is 167 cm. Her body weight is 55 kg and Bisht’s body measurement is 34-26-34. Her eye color is Black and her hair color is Black.

Donal Bisht was born into an upper-middle-class Hindu Rajput family in Alwar, Rajasthan. His entire family believes in Hinduism and also worships Hindu gods and goddesses. After the completion of Donal’s schooling, his family shifted to Delhi. Donal Bisht’s father’s name is Jai Singh Bisht and his mother’s name is Jasumati Bisht. In Donal’s house, apart from his parents, she also has an elder brother named Ranjan Bisht. When Donal moved to Mumbai with the dream of becoming an actress, her family was not happy with her decision.

Donal’s parents had told her that they would not come to Mumbai until she worked as a lead role in a serial in the TV industry. After this, she worked a lot on her acting, and as a result of her hard work, she got to play the lead role of Sakshi Deol in Life OK’s serial Kalash Ek Vishwas. Talking about the marital status of Donal Bisht, she is unmarried. There is also news of their affair on the internet. According to sources, the name of Sonal Bisht’s boyfriend is Prateek Shah, who is a director.

There was news that Donal is dating Prateek Shah, the director of the show “Ek Deewana Tha” but now it is discussed that both have a breakup. When Donal started dating Prateek, when asked about her and Prateek’s relationship, she called it a mere rumor. Donal had said, ‘There is nothing like this between us, we are just good friends. I am an actor and he is a director. Right now I have to focus only on my career.’ Due to Donal’s unmarried, the name of her husband is not known yet.

Talking about the total net worth of Donal Bisht, her net worth is around ₹5 Crores – ₹7 Crores. Her main source of earnings is acting in TV serials and for which she charges around ₹70k per episode. She also makes a channel on youtube where she has 6k subscribers on youtube and makes a good amount of money from youtube.

Apart from this, their main source of income is from advertising and sharing posts of some brands on social media. Donal is also participating in Bigg Boss 15 where she is being paid a fee of around ₹1 lakh every week.

Her all-time favorite movie is Dilwale Dulhania Le Jayenge. Her hobbies are acting, writing, singing, dancing, traveling, and shopping. She likes to travel to Dubai and Europe during her holidays. She likes to eat non-veg food. In the table below, we have given a list of all her favorite things, which you must read once.

Donal Bisht has also been given many awards for her performance and glamorous look. They were given the Youth Icon of the Year 2020 award in the year 2020 for their look. Apart from this, they have also received the Perfect Style Icon 2020 award. In the year 2021, she was awarded the title of the International Icon Trendsetter of the Year. Below we have given the list of all their awards which you must read once.

Whenever she posts any of her photos on social media, it becomes viral. She is also very much in a discussion about her social media pictures. Donal Bisht is followed by nearly more than 1 million fans on Instagram. She is also present on Facebook where she has more than 4.5 million followers. Donal also makes a channel on youtube where she has more than 6k subscribers on his youtube channel named Donal Bisht.

Apart from this, Wikipedia has also covered Donal on its page. Her account is also present on Twitter where she expresses her views with her more than 13k followers. In the table below, we have shared the links to all her social media profiles with you. By clicking on it you will be able to access their profile page directly.

Some Interesting Facts About Donal Bisht:

Que. What is the caste of Donal Bisht?

Que. What is the age of Donal Bisht?

Que. Where is from Donal Bisht?

Ans. She was born in Alwar, Rajasthan but her family shifted to Delhi, India after some time.

This is the full details on Donal Bisht Biography, Age, Family, Father, Boyfriend, Serial, Net Worth & More. Share this post with your friends and keep visiting us on celebwale.com for famous personalities and trending people’s biography with updated details. If you have any thoughts, experiences, or suggestions regarding this post or our website. you can feel free to share your thought with us.