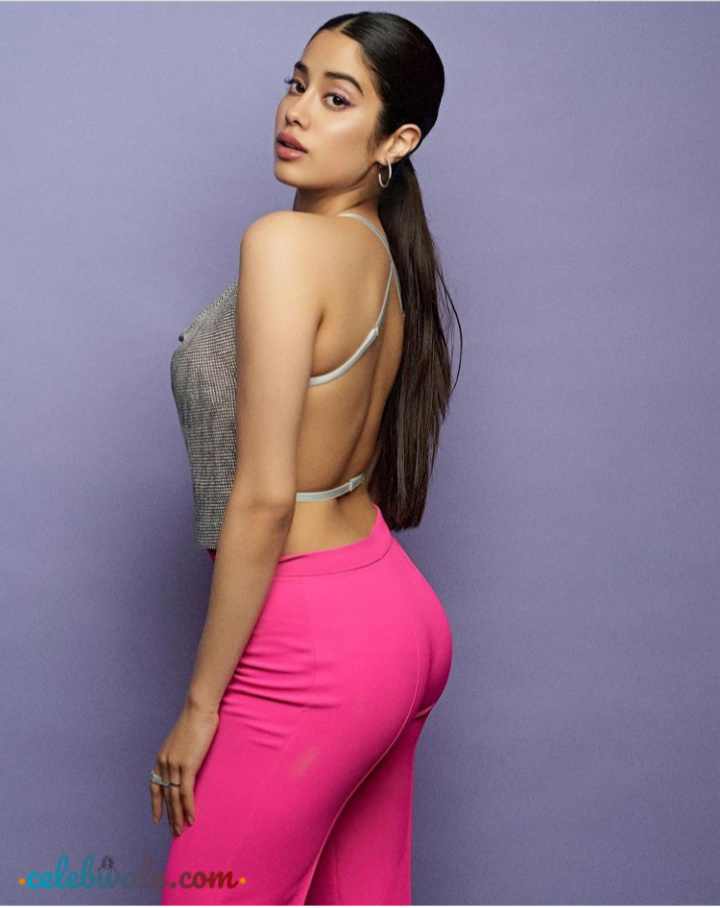 Janhvi Kapoor is a very hot and beautiful actress in the Bollywood industry who mainly works in Hindi movies. She was born on 6 March 1997 in Andheri, Mumbai, Maharashtra. Janhvi is a Starkid and belongs to the film background. Her mother Sridevi was a veteran Bollywood actress who acted in many hit films and her father Boney Kapoor is a film producer.

Belonging to good family background, she got her 10th and 12th education from Dhirubhai Ambani International School Mumbai. She later moved to Los Angeles USA to pursue a course in film and theater. After completing her graduation in the US, she moved back to Mumbai and wanted to work in Bollywood.

But her mother Sridevi did not like Janhvi to join Bollywood. She wanted Janhvi to get married and settle. But later, seeing the passion, dedication, and enthusiasm towards acting, she supported Janhvi’s decision.

In 2015, Janhvi was offered a Telugu movie in which Star Telugu actor Mahesh Babu was in the lead role but Janhvi refused to do that film as Mahesh Babu was older than Janhvi. Janhvi was the makers’ first choice for the movie Simmba and they cast Janhvi as the lead actress in the film but later Janhvi refused to do the film as she was uncomfortable to do acting in front of such a big star like Ranveer Singh.

Lastly, Janhvi made her Bollywood debut with the movie Dhadak with her opposite actor Ishaan Khattar which was released in theaters in July 2018. The movie was a remake of the Marathi film Sairat and was produced under the banner of Dharma Productions which was produced by Karan Johar.

The film was given negative reviews by the critics and the audience was not much liked but the film was declared a commercial hit. The film grossed worldwide 1.1 billion rupees and Janhvi was awarded the Best Female Debut for Zee Cine Award for her role in Dhadak Movie. In the same year, cosmetic Nykaa selected Janhvi Kapoor as their brand ambassador.

Janhvi then acted in Zoya Akhtar’s horror film Ghost Stories in the year 2020, which was disliked by Film Critics. Although they praised Janhvi’s role. The film was released on Netflix. Janhvi’s next biopic was followed by Gunjan Saxena: The Kargil Girl in which she played the aviator Gunjan Saxena.

But the film could not be released in theaters due to the Pandemic and the film was released on Netflix. She spent time with the real Gunjan Saxena to prepare for this film, took physical training, and learned the body language of an Air Force officer. In the year 2021, Janhvi Kapoor is going to be seen in the comedy horror film Roohi.

In this film, Bollywood actors Rajkumar Rao and Varun Sharma will be seen in lead roles with him. Apart from this, she has been cast opposite Karthik Aryan and Laksh Lalwani in Dostana 2. She will also be seen in the lead role in Karan Johar’s period film Takht.

Janhvi Kapoor’s age is just 26 years old in 2023 and she is one of the most beautiful actresses in the Bollywood industry who belongs to Mumbai. She works hard to keep her body fit and does gym workouts daily. She takes very nappy food which helps in keeping her body fit and looking attractive. Janhvi Kapoor’s height is 5 feet 4 inches, which is 163 cm. Her body weight is 50 kg and Janhvi’s body measurement is 32-26-32. Her eye color is dark brown and her hair color is black.

Janhvi was born into a rich Hindu family, she believes in Hindu beliefs and she worships Lord Ganesha. She is a star kid whose father’s name is famous Bollywood film producer Boney Kapoor and her mother Late Sridevi was a famous Star Bollywood actress.

Janhvi’s mother Sridevi died when she was in Dubai for attending the wedding ceremony of her nephew Mohit Marwah. According to the General Department of Forensic Evidence, Dubai revealed that the cause of death was Accidental Drowning. Apart from Janhvi and her father in the house, she also has a younger sister Khushi Kapoor and an elder half-sister, Anshula Kapoor.

She has also an elder half-brother named Arjun Kapoor. Her marital status is unmarried but she has some affairs in her life. Firstly, she was in a relationship and dated Shikhar Pahariya, who is the son of a famous businessman Sanjay Pahariya and also the maternal grandson of a famous politician Sushil Kumar Shinde.

Later Janhvi Kapoor was in a relationship with Akshat Rajan, who is an entrepreneur. In August 2016, some personal photos of Janhvi and Akshat were leaked on social media in which both of them were seen kissing each other liplock.

This photo was taken during a late-night party at a nightclub. Rumors believe that his affair has also been with Ishan Khattar who is a co-actor of Janhvi in the movie Dhadak, but there is no official information about it.

Janhvi Kapoor charges ₹3 crores to ₹5 crores per movie and her total net worth is ₹40 crores.

Janhvi’s account is present on all social media platforms, where she keeps uploading her hot photos, which keeps her in the headlines. Fans have a lot of craze about them, she is popular on social media due to its hotness. Below we are sharing the links to all their social media accounts with you, by clicking on them you will be able to access their profile directly. She is very popular on Instagram where she keeps sharing her latest pictures with her fans.

She shares more than 3 to 5 photos a week with her fans, the total number of posts on her Instagram is more than 400 and their number of followers is more than 21 Million. She is available on Facebook and she has 2.5m followers on her Facebook Page. Janhvi Kapoor is also covered by Wikipedia. Below in the table, we provided you her Wikipedia page link and also other various links which you must click on them and also follow her page.

Some Interesting Facts About Janhvi Kapoor:

Que. Is Janhvi Kapoor in a relationship?

Ans. If rumors are to be believed her relationship is going with Shikhar Pahariya but there is no official confirmation.

Que. What did Janhvi Kapoor study?

Ans. Janhvi completed a course in theatre and acting from The Lee Strasberg Theatre & Film Institute in Los Angeles, USA.

Que. Where did Janhvi Kapoor study?

Ans. Janhvi completed her intermediate education at Dhirubhai International School, Mumbai and she did her course in theatre and acting at The Lee Strasberg Theatre & Film Institute, Los Angeles, USA.

Que. What is Janhvi Kapoor’s weight?

This is the full details on Janhvi Kapoor Age, Height, Family, Biography, Father, Husband, Mother, Sister, Education, Net Worth & More. Please share this post with your friends and keep visiting us on celebwale.com for famous personalities and trending people’s biography with updated details. If you have any thoughts, experiences, or suggestions regarding this post or our website. you can feel free to share your thought with us.