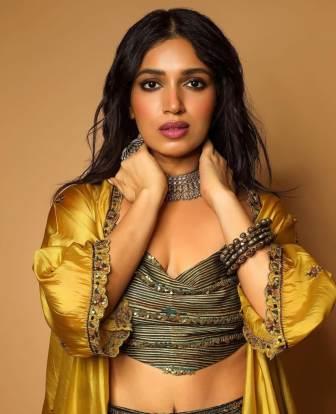 Bhumi Pednekar is an Indian film actress who predominantly works in Hindi films. She is famous for her role in the Bollywood movie Dum Laga Ke Haisha. She was born on 18 July 1989 in Bombay (now Mumbai), Maharashtra. After receiving her early education from Arya Vidya Mandir in Juhu, she enrolled for acting studies at Whistling Woods International in Mumbai. Her parents had enrolled him in that college by taking a loan for her studies but she was expelled from the college due to her poor attendance. Within a year and a half of being expelled from college, she joined Yash Raj Films as an assistant film director.

In YRF, she worked under the supervision of Senior Casting Director Shanu Sharma for more than 6 years. Later, when YRF asked her to give a demo for the lead heroine of the film Dum Laga Ke Haisha, she had no idea that she would be cast as the lead heroine in the film. After being selected as a heroine in the film, she gave close to 100 auditions for her role and also increased her weight by 25 kg. The movie proved to be a success at the box office and Pednekar was awarded the Filmfare Award for Best Female Debut for her role.

After making her Bollywood debut, she never looked back in her life and acted in many hit movies one after the other. Almost two years after her debut film was a box office hit, she worked with Akshay Kumar in the Bollywood movie Toilet: Ek Prem Katha. This movie was also a blockbuster at the box office. She has so far worked in movies like Shubh Mangal Saavdhan, Lust Stories, Sonchiriya, Saand Ki Aankh, Bala, Pati Patni Aur Woh, and Durgamati.

Pednekar was born in Bombay (Mumbai) to an upper-middle-class Konkani and Haryanvi family. His family believes in Hinduism. Bhumi Pednekar’s father’s name is Late Satish Pednekar who was a former Home and Labor Minister of Maharashtra. His father belonged to the Konkani family and died due to oral cancer. Bhumi’s mother’s name is Sumitra Pednekar and she belongs to a Haryanvi family.

After the death of her husband, her mother Sumitra works as an anti-tobacco activist. Bhumi has a twin sister named Samiksha Pednekar and she is a lawyer. Her marital status is currently unmarried and there is no information about her boyfriend or husband.

The total net worth of Bhumi Pednekar is around ₹ 20 crores. She earns around ₹ 30 lakhs every month and she earns around ₹5 crores every year. She is one of the Bollywood lead heroines. She charges around ₹ 2 crores for every film. Talking about his car collection, he has cars like Land Rover and Range Rover SUV. Their cost is more than ₹ 1 crore.

Some Interesting Facts About Bhumi Pednekar:

This is the full details on Bhumi Pednekar Biography, Age, Height, Sister, Family, Husband, Net Worth & More. Please share this post with your friends and keep visiting us on celebwale.com for famous personalities and trending people’s biography with updated details. If you have any thoughts, experiences, or suggestions regarding this post or our website. you can feel free to share your thought with us.