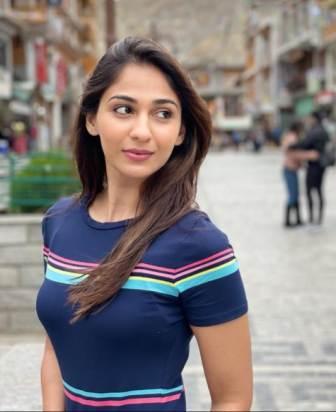 Vidhi Pandya is an Indian television actress and model known for her role as Imli Rajvanshi in the Colors TV channel serial Udaan. Vidhi was born on 4 June 1996 in Mumbai, Maharashtra. After this, she passed her high school examination at St. Lawrence High School. Continuing her studies, she completed her graduation from Sophia College, Mumbai. Attracted to modeling from the beginning, Vidhi started modeling in their college days.

After facing several rejections in the auditions finally, She got a chance to debut in the television industry for the first time in the year 2014 with the telecasted serial Tum Aise Hi Rehna. In this serial, Vidhi played the supporting character of Kiran Maheshwari. Her role was loved by the audience which led her to play the supporting character of Nidhi Anand in the serial Balika Vadhu in the following year 2015. She has also played an episodic role in Sony TV’s crime show Crime Patrol.

The turning point in her career came when she got an opportunity to play the lead role of Imli Rajvanshi in the Colors TV serial Udaan. This serial was aired on Colors TV in the year 2016. Vidhi was associated with this series for 3 years, later she left the show in the year 2019 due to some reasons. In the year 2019, she appeared as a guest on Colors TV’s show Kitchen Champion. She appeared in the lead role of Rani in episode 110 of &TV serial Laal Ishq in the same year.

After this, she was seen in the lead role of Capt. Dr. Suman Tiwari in the Sony TV serial Ek Duje Ke Vaaste 2 in the year 2020. She replaced Kanikka Kapur in this serial. In the year 2021, she is participating in Bigg Boss 15 as the main contestant. Apart from them, actors like Jay Bhanushali, Ieshaan Sehgal, Sahil Shroff, Karan Kundrra, Simba Nagpal, Vishal Kotian, Nishant Bhat, Umar Riaz, Pratik Sehajpal, Akasa Singh, Shamita Shetty, Afsana Khan, Tejasswi Prakash, Meisha Iyer, and Donal Bisht are going to be seen in Bigg Boss 15.

Vidhi Pandya’s age is 26 years old in 2032. She is an emerging actress in the television industry who looks quite fit. She works a lot on her fitness and for this, she keeps practicing kinds of exercises in the gym. Apart from this, she also considers her fitness from regular yoga. Vidhi also takes care of her food and consumes regular green and fresh vegetables in the food so that it can be healthy. Apart from this, she also takes fruit juice.

Vidhi Pandya was born in a middle-class Gujarati Hindu family and her family belongs to Gujarat. Her entire family worships Hindu deities and believes in the Hindu religion. Vidhi Pandya’s father’s name is not known and her mother’s name is Rita Pandya. Apart from her parents in Vidhi’s house, there is also an elder brother named Urmil Pandya.

Talking about the total Net Worth of Vidhi Pandya, their net worth is up to ₹1.5 crores. Their main earnings are to work as an actress in TV serials. Apart from this, she also shares some sponsor posts on her Instagram Account for which she charges up to thousands of rupees.

Vidhi is also covered by Wikipedia and she is also present on Twitter where she expresses her views through tweets with her followers. She has more than 6.4k followers on Twitter. In the table below, we have shared the links of all their social media profiles with you, by clicking on which you will be able to access their profile page directly.

Some Interesting Facts About Vidhi Pandya:

This is the full details on Vidhi Pandya Age, Family, Father, Husband, Boyfriend, Biography, Net Worth & More. Please share this post with your friends and keep visiting us on celebwale.com for famous personalities and trending people’s biography with updated details. If you have any thoughts, experiences, or suggestions regarding this post or our website. you can feel free to share your thought with us.