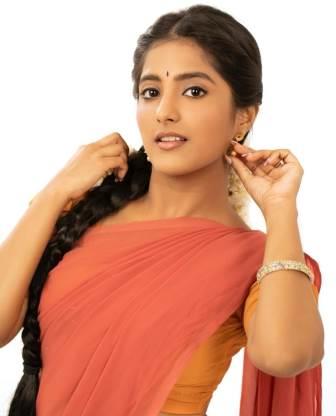 Ulka Gupta is an Indian television actress known for her role as Manu in the Zee TV serial Rani Laxmibai. Ulka was born on 12 April 1997 in Mumbai, Maharashtra. Her family is from Saharsa, Bihar. She completed her early education at Rustomjee International School, Mumbai. Initially, she wanted to grow up to be an IAS officer. But, seeing the acting environment in the house, she got inclined toward acting.

She got her first break in the serial Resham Dankh in 2005 when she was just 8 years old. After this, she played the role of Saloni’s daughter in the Zee TV serial Saat Phere. In 2009, she got her big break from the character of Manu in the Zee TV serial Rani Laxmibai. She left her mark in the TV industry with her acting.

She has so far appeared in serials like Veer Shivaji, Khelti Hai Zindagi Aankh Micholi, Devon Ke Dev Mahadev, and Shaktipeeth Ke Bhairav. Ulka made her film debut in 2015 with the role of Prashanti in the Telugu film Andhra Pori. She played the childhood character of Anushka Shetty in the Telugu superhit film Rudhramadevi.

After this, she made her Bollywood debut in 2016 with the role of Riya Kapoor in the Hindi film Traffic. She also debuted in Bengali cinema with the film Shrestha Bangali in 2017.

She played the character of Nandini Mohile in the Bollywood movie Simmba after debuting in the Marathi industry with the film Odh The Attraction in 2018. She is seen in the lead role of Bunny in the Star Plus serial Banni Chow Home Delivery in 2022.

Ulka Gupta age is just 25 years old in the year 2022 and she is one of the young actresses in the tv industry.

Ulka was born in Mumbai to a prosperous Hindu family. His entire family believes in Hinduism and worships Hindu deities. Ulka Gupta’s father Gagan Gupta is also an actor and at the age of 15, he fled from Saharsa, Bihar to Mumbai to become an actor. After that, he worked in many films, serials, and web series.

Ulka Gupta’s mother’s name is Manju Gupta and she is a housewife. Apart from his parents, she has an elder brother Janmejay Gupta and a younger sister Goya Gupta. Goya is also an actress who has worked in some serials. Ulka’s marital status is unmarried and there is no information available about her husband or boyfriend.

Talking about the total net worth of Ulka Gupta, her Net Worth is around ₹70 Lakh to ₹80 Lakh. The main earnings of Ulka have to act in TV shows. Apart from this, she keeps sharing sponsors from her social media account for which she takes good money.

Some Interesting Facts About Ulka Gupta:

This is the full details on Ulka Gupta Biography, Age, Height, Parents, Father, Family, Husband, Net Worth & More. Share this post with your friends and keep visiting us on celebwale.com for famous personalities and trending people’s biography with updated details. If you have any thoughts, experiences, or suggestions regarding this post or our website. you can feel free to share your thought with us.