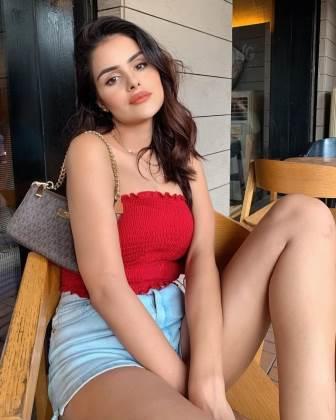 Priyanka Chahar Choudhary is an Indian model and television actress who is best known for her role as Tejo Sindhu in the Colors TV serial Udariyaan. She was born on 13 August 1996 in Jaipur, Rajasthan. She also completed her schooling in Jaipur only. She is a graduate. She wanted to become a successful actress right from the beginning.

Priyanka started her career as a host. She initially used to host events, but later took up modeling and worked in the Punjabi music industry. During that time she worked as a model in Punjabi music videos like Online (2016), Mai Bewafa (2018), and Hanju (2020).

Priyanka has also worked in Bollywood. She has worked in the Hindi films Pending Love, Lateef to Laden (2018) and Kandy Twist (2019). She acted in Ullu App web series 3G Gaali Galoch Girls in 2019. Priyanka Choudhary’s real name is Pari Choudhary.

Despite working in films, web series and music videos, she was not able to get that fame in the industry, after which she changed her name to Priyanka Choudhary in 2019 on the advice of a numerologist. About this, she had said in an interview, ‘I have earned a lot of name by the name Pari, but sometimes it seems that there is something better in luck. I hope that something better will happen in my career.

Priyanka Chahar Choudhary got popularity from the TV show ‘Udariyaan’. In that serial she played the role of Tejo Sindhu which was liked by the audience. But even before that she worked in some serials. She appeared in ‘Ye Hai Chahtein’, ‘Savdhaan India’ and ‘Gathbandhan’. In 2022, she is participating as a contestant in Colors TV popular show Bigg Boss 16.

Priyanka Chahar Choudhary’s age is 26 years old in the year 2022. She is quite popular on social media for her glamorous look. To maintain it, she regularly resorts to exercise and yoga.

Priyanka Choudhary was born in an upper middle class Hindu family. His family believes in Hinduism. Priyanka Chahar Choudhary’s father’s name is Mahavir Singh Chahar, who is posted as Captain in the Indian Army. Her mother’s name could not be known. She has 2 brothers in his family named Yogesh Choudhary and Vikas Choudhary. Apart from this, she also has 6 sisters. His marital status is still unmarried. There is no information available about Priyanka Choudhary’s affair and boyfriend.

Priyanka Chahar Choudhary total net worth is around ₹ 7 crores. She earns around ₹40k per episode. In 2022, she is participating in Bigg Boss 16 as a contestant, for which she is charging around ₹5 lakh per week.

This is the full details on Priyanka Chahar Choudhary Biography, Age, Height, Boyfriend, Family, Net Worth & More. Share this post with your friends and keep visiting us on celebwale.com for famous personalities and trending people’s biography with updated details. If you have any thoughts, experiences, or suggestions regarding this post or our website. you can feel free to share your thought with us.