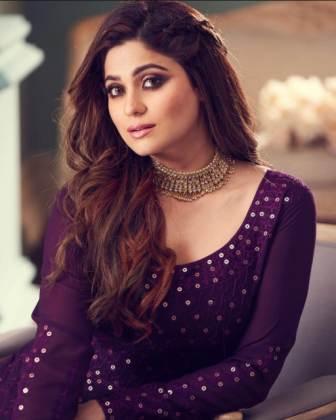 Shamita Shetty is an Indian actress known primarily for her work in Bollywood Industry and Hindi television shows. She was born on 2 February 1979 in Mangalore, Karnataka. She is an actress, model, and interior designer who made her film debut in the year 2000 with the blockbuster film Mohabbatein starring Shah Rukh Khan, Amitabh Bachchan, and Aishwarya Rai. She was nominated for many awards for her tremendous acting in this film. She was given the IIFA Award for Star Debut of the Year for her Ishika role in the film. Shamita did her high school education at St. Anthony Girls’ High School, Mumbai.

After this, she obtained a Commerce degree from Sydenham College, Mumbai. After that, she did a Diploma course in Fashion Designing from SNDT College, Mumbai. After this, she started doing an internship in fashion design under the supervision of famous designer Manish Malhotra, where her acting talent was recognized by Manish and advised her to prepare for an acting career. Shamita started preparing for acting following the advice of Manish Malhotra and her sister Shilpa Shetty, after which she started her film career with the multi-starrer blockbuster film Mohabbatein.

After making her Bollywood debut, she made her debut in the Tamil industry by playing the role of Geeta Karthikeyan in the Tamil film Raajjiyam. The following year in 2003, she made her debut in the Telugu film industry by playing the role of Shanti in the Telugu film Pilisthe Palukutha. After this, in the year 2004, she played the role of Anjana and Ishita Singhania in the films Agnipankh and Wajahh: A Reason to Kill. In the year 2005, Shamita played the role of Riya A Singhania, Sonia Mehra, and Pallavi Arora in the Bollywood films Fareb, Zahar, and Bewafa respectively.

She worked with her real sister Shilpa Shetty in the Bollywood film Fareb, in which she did a great job. Her role as Sonia Mehra in the next film Zahar was highly appreciated by the film critics and was nominated for the Stardust Award 2006 in the Star of the Year Female category for her tremendous acting. Shamita played the role of Megha and Shanaya Rao in the films Mohabbat Ho Gayi Hai Tumse and Cash, which were released in 2006 and 2007. Apart from this, Shamita did item numbers in the Bollywood film Saathiya song Chori Pe Chori and in the song Sharara Sharara from the film Mere Yaar Ki Shaadi Hai.

In 2007, Shamita did another item number in the title song Heyy Babyy from the film Heyy Babyy and made a special appearance in the 2008 film Hari Puttar: A Comedy of Terrors. Apart from this, in the year 2009, Shamita made her debut by participating in Colors TV’s most popular show Bigg Boss 3 as a contestant. After being in Bigg Boss for about 40 days, she left the show for the marriage of her sister Shilpa Shetty. She was the only contestant on the show who was not nominated even once during her stay in the Bigg Boss house.

In 2011, Shamita completed her first project, designing a Royalty club in Mumbai, following her passion for interior designing. Later, her love for interior designers led her to pursue a diploma in fashion design from London’s Central Saint Martins and Inchbald School of Design. After this, after taking a break from films, and focusing on her design career, she designed Lossis Spa Chandigarh and some other overseas properties. Shamita Shetty has also been awarded the Best Interior Award at the Asian Spa Awards for designing the Chandigarh Lossis Spa.

After about 6 years, Shamita participated as a contestant in season 8 of the television dance reality show Jhalak Dikhhla Jaa where she was the 2nd runner-up of the show. She later made her debut in the year 2017 by playing the role of Suman Rao in the MX Player web series Yo Ke Hua Bro. In 2019, she participated as a contestant in Colors TV’s popular show Khatron Ke Khiladi Season 9 where she was the finalist of the show.

In the year 2020, Shamita Shetty appeared in the web series The Tenant and Black widows. In the year 2021, she is once again seen as a contestant in Bigg Boss OTT, which is being released this time on the OTT platform before TV. The show is being hosted by Bollywood’s famous director and producer Karan Johar.

Shamita Shetty’s age is 43 years in the year 2022 but even today she beats many actresses with her fitness. Like her sister Shilpa, Shamita also works hard for the perfect body shape. Talking about her fitness secrets and sexy figure, she said in an interview that she keeps on drinking ORS powder mixed with a glass of lukewarm water several times a day, which keeps her body weight maintained. It is very beneficial in keeping your body hydrated and at the same time, it also helps a lot in removing toxins from the body. Apart from this, ORS is also the secret to her glowing skin.

She says that she is not able to diet like her sister Shilpa but she takes full care that healthy things are included in her diet. She is a chocoholic and does not decide any day to eat it. She eats chocolate whenever she wants. She takes full care of her body and stays away from eating junk food. She eats everything in food and then works hard for hours in the gym. There is absolutely no gluten and lactose in their diet. However, she uses gluten in a different way because she does not want her body to get used to any one type of food.

They believe that every few days, new food and diet should be given to the body, otherwise your body becomes used to eating the same. After this, no matter how hard you try, there is no effect on the body. Even when Shamita is shooting, she keeps eating something light after every three hours. There is definitely a person with them who keeps reminding them about food. Although she takes care of herself and eats dry fruits or nuts every 3 hours.

Apart from this, she is also an excellent kickboxer, so she likes to do weight training and boxing. Shamita loves to work out early in the morning, it gives her a lot of energy. They believe that working out in the morning creates happy hormones in the body and makes their day happy too. She does all kinds of exercises in the gym. Shamita Shetty’s height is 5 feet 5 inches, which is 165 cm. Her body weight is 55 kg and Shamita’s body measurement is 34-26-34. Her eye color is Brown and her hair color is Black.

Shamita was born in a prosperous Tulu Bunt family in Mangalore. Her entire family worships Hindu deities and believes in Hinduism. Shamita Shetty’s father’s name is Surendra Shetty who passed away in the year 2017. Shamita Shetty’s mother’s name is Sunanda Shetty who is a housewife. Both her parents were manufacturers of tamper-proof water caps in a pharmaceutical company. Apart from her mother, she also has an elder sister named Shilpa Shetty in Shamita’s house.

Shilpa Shetty is a well-known actress in the Bollywood industry. Shilpa is married to famous businessman Raj Kundra. Raj Kundra is also Shamita’s brother-in-law. Talking about the marital status of Shamita Shetty, she is unmarried. Shamita Shetty’s husband’s name is not known as she is unmarried. Although Shamita’s name has been associated with many actors, even at the age of 43, this actress has not married yet. But in Bigg Boss OTT, Raqesh and Shamita were seen getting romantic many times.

Both were seen hugging and kissing each other lovingly. Shamita and Raqesh proposed to each other after coming out of the show and later Shamita joined Bigg Boss 15. After which, Raqesh also entered the show through the wild card, after which both of them also dated in one episode of the show. Shamita has accepted Raqesh as her boyfriend in front of everyone in the show.

Talking about Shamita Shetty’s total net worth, her total earnings range from around ₹14 crores to ₹25 crores. She is the sister of the famous Bollywood film actress Shilpa Shetty and the famous businessman Raj Kundra is her brother-in-law.

On the earning side, apart from interior designing, she is associated with and endorses brands like Aldo, Audi, and IIJAS jewelry exhibitions. According to reports, Shamita Shetty also earns millions from some sponsored posts on her Instagram page.

Apart from this, she charges good money for working in web series shows. According to sources, she is charging around ₹3.75 lakh per week in Bigg Boss OTT. She also appears in Pantene’s TV ad for the last few years along with her sister for which she charges lakhs of rupees.

Her favorite filmmakers are Aditya Chopra and Yash Chopra. She is very fond of food and Shamita loves to eat chocolates. She does not wait for a day to eat chocolate, whenever she feels like it, she eats chocolate.

Apart from this, she also likes to eat dosa and ice cream. Shamita is also very fond of traveling abroad, she likes to spend her holidays in places like London, Paris, Switzerland, and Singapore. In the table below, we have given a list of all his favorite things, which you must read once.

Shamita Shetty’s account is present on all social media platforms where she keeps sharing her latest photos and videos with her followers. Her account is present on Instagram where she has more than 2.6 million followers and her number of posts is more than 1.8k. She shares fitness-related posts and personal posts with her followers on her Instagram page. Some of her posts are also sponsored from which she earns. She is also present on Facebook where she has around 4.4 million followers.

She is also very active on Facebook and her account is verified so that people can easily connect with him. Shamita’s account is also present on Twitter where she has more than 85k followers. She shares her thoughts with people on Twitter. Shamita has also been covered by Wikipedia on its page. In the table below, we have shared with you the links of all his social media profiles, by clicking on which you will be able to access his profile page directly.

Some Interesting Facts About Shamita Shetty:

This is the full details on Shamita Shetty Biography, Birthday, Age, Height, Father, Family, Education, Husband, Sister, Movie List, Net Worth & More. Please share this post with your friends and keep visiting us on celebwale.com for famous personalities and trending people’s biography with updated details. If you have any thoughts, experiences, or suggestions regarding this post or our website. you can feel free to share your thought with us.