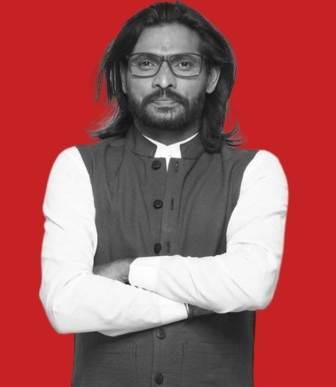 Abhijeet Bichukale is an Indian politician, poet, and well-known personality of Marathi television who first came into the limelight by participating in Bigg Boss Marathi Season 2 as a contestant. He was born on 28 November 1976 in Bichukale village of Satara district. He completed his schooling at a local school in the village. He reached Kolhapur for further studies. He graduated from Shivaji University, Kolhapur. After that Bichukale did BA from Lal Bahadur Shastri College, Satara. Honors (specialization in English).

After this, he became active in district-level politics in Satara. Abhijit Bichukale had contested the 2019 Lok Sabha elections from the Satara constituency as an independent party. He believes that we cannot beg for tickets from any party. Abhijit Bichukale, standing as an independent, got 2399 votes in the election. Abhijeet Bichukale, who has a passion for poetry, calls himself a ‘poet-minded leader’. His dream is that one day he will definitely become the Prime Minister of India.

Something happened that the Mumbai Police arrested Abhijeet Bichukale for bouncing a cheque during the show. This forced him to withdraw from the Big Bass competition. It was an ongoing case in which Abhijit Bichukale was accused of bouncing a cheque in the year 2015 and even after sending summons several times by the police, no response was received from his side.

After which the police finally issued an arrest warrant against him on May 21 and arrested him from the show itself. A few weeks later, he reached Bigg Boss house as a guest artist. After a few days, Bichukle left from there. Due to this incident in Bigg Boss Marathi 2, Abhijeet Bichukale’s name came to the attention of the people and he got a lot of limelight. Bichukale is also a singer and sang many Bollywood songs

Now he is joining the show once again in the year 2021 through a wild card entry in the Hindi version of Colors TV’s popular show Bigg Boss 15 along with actress Rashami Desai and Devoleena Bhattacharjee.

Abhijeet Bichukale’s age is 45 years old in the year 2021. He is a politician and one day sees the dream of becoming the Prime Minister of the country. Abhijeet is a pure vegetarian person who just likes to eat vegetarian food. Apart from this, he also tried to keep their body fit with the help of Gym and Yoga. Apart from this, she likes to consume seasonal vegetables green, and fresh fruits.

Abhijeet Bichukale’s height is 5 feet 6 inches, which is equal to 168 centimeters. Bichukale body weight is about 68 kg, he takes a proper diet to keep his body fit so that his body measurement is 38-30-12. His eye color is Black, and his hair color is also Black.

Talking about the marital status of Abhijeet Bichukale, he is married and his wife’s name is Alankrut Bichukale who is a LIC agent and social worker. Bichukale son name is Maharaja Bichukale and his daughter name is Yasmin Bichukale.

Talking about the total net worth of Abhijeet Bichukale, his net worth is around ₹5 lakh. He was joined as a Contestant in the second season of Big Boss Marathi for the first time in 2019. For which he used to charge about ₹50k every week. Now in 2021, he is taking entry through Wild Card as a Contestant in Big Boss Hindi Version Big Boss 15. To participate in this show, he is charging up to ₹1 lakh every week.

Abhijeet Bichukale Account is not available on any Social Media Channel. Even Wikipedia has not covered them on their page yet. In the table below, we are sharing with you the links of all his social media profiles, by clicking on which you will be able to access his profile page directly.

Some Interesting Fact About Abhijeet Bichukale:

This is the full details on Abhijeet Bichukale Biography, Wiki, Age, Height, Father, Family, Wife, Political Career, Bigg Boss 15, Net Worth & More. Share this post with your friends and keep visiting us on celebwale.com for famous personalities and trending people’s biography with updated details. If you have any thoughts, experiences, or suggestions regarding this post or our website. you can feel free to share your thought with us.