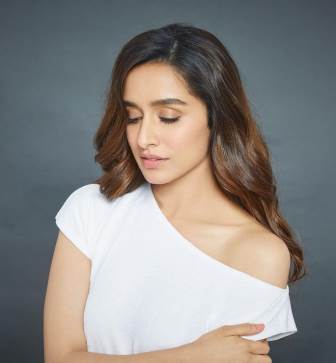 Having a film background, Shraddha wanted to grow up to be an actress since childhood. She did her schooling at Jamnabai Narsee School and at the age of 15, she shifted to the American School of Bombay, Mumbai where she was a classmate with actress Athiya Shetty and actor Tiger Shroff. Along with studies, she used to participate in dance competitions as well.

Along with this, at the age of 17, she played football and handball while challenging himself because she felt that this game was very challenging. After finishing schooling, she went to America for higher education where she enrolled at Boston University. It was during her first year of psychology at Boston University that she started getting calls from filmmakers.

She was just 16 years old when she was offered an offer by Salman Khan to be a part of her first film, Lucky: No Time for Love but she turned down the offer as she wanted to become a psychologist. However, later she could not stop her desire to get into films and came back to Mumbai after dropping out of college in the first year of psychology studies.

She then made her acting debut in the 2010 film Teen Patti opposite Amitabh Bachchan, Ben Kingsley, and R Madhavan. Played the role of a college girl in that film. The film received generally negative reviews, although her performance was well received. After her acting debut, she signed a three-film deal with Yash Raj Films and starred opposite Taha Shah in her 2011 teen comedy Luv Ka The End.

Kapoor played the lead role of a teenage girl who plots against her boyfriend after he cheats on her. The film performed poorly at the box office and received mixed reviews from critics. However, Kapoor’s performance received a lot of positive feedback. In 2013, Shraddha Kapoor got a better flight with Mohit Suri’s romantic drama Aashiqui 2. Aashiqui 2 was the sequel to the 1990 film Aashiqui.

She starred in the film as Aarohi Keshav Shirke, a small-town bar singer who becomes a successful playback singer with the help of a famous male singer. The film turned out to be a huge box office success with global revenue of ₹1.09 billion. After Aashiqui 2, she worked in many great films including Ek Villain, Haider, ABCD 2, Baaghi, Stree, and Chhichhore, and won the hearts of the audience.

Shraddha Kapoor’s age is 35 years old in the year 2022. She is one of the top actresses in the Bollywood industry who is extremely fit and slim in appearance. She takes special care of her diet. She takes a balanced diet to maintain her fitness. Her diet consists of grilled vegetables, eggs, fish, and fresh fruit juices.

She likes to follow her diet at the right time where she wakes up early in the morning and eats poha, upma, and omelet for breakfast. After this, she eats green vegetables, dal, and rotis at the launch. She makes her dinner by 8 pm and prefers to have items like brown rice, lentils, and fish curry for dinner.

Apart from this, she drinks plenty of water to stay fit. She likes to drink fruit juices and coconut water, from which his body also gets nutritional elements. Also, Shraddha keeps away from fatty foods like pizza, burgers, chips, and much other junk food. She likes sweet food which she eats according to her diet.

Apart from food, Shraddha works out in the gym every day. Her workouts include exercises like Strengthening, Push-Ups, Cardio, Crunches, and Stretching. Along with this, she also keeps playing sports in which she keeps doing activities like hill climbing and scuba diving to keep herself fit.

Shraddha Kapoor’s height is 5 feet 5 inches, which is 165 cm. Her bodyweight is 55 kg and Shraddha’s body measurement is 34-25-34. Her eye color is dark brown and her hair color is black.

Shraddha was born in a prosperous Hindu family. His entire family believes in Hinduism and worships Hindu deities. His father Shakti Kapoor is a well-known actor in the Bollywood industry who has played the role of the villain of many Bollywood films. Shraddha’s mother Shivangi Kolhapure Kapoor has also been a Bollywood heroine.

Apart from his parents, she also has an elder brother named Siddhant Kapoor. Apart from this, she is the niece of late Lata Mangeshkar, Asha Bhosle, Meena Khadikar, Usha Mangeshkar and Hridaynath Mangeshkar.

Talking about her marital status, she is unmarried but according to some media reports, she is having an affair with celebrity photographer Rohan Shrestha. Both Shraddha and Rohan have appeared together on many occasions. Although both have never confirmed anything officially.

The total net worth of Shraddha Kapoor is around ₹60 crores. Her main source of earning is acting in films. She charges around ₹5 crores per film as a lead actress. Apart from films, she endorses many brands like Lakme, Veet, Flipkart, Secret Temptation, and Myglamm for which she charges crores of rupees.

Today she has a sea face luxurious house in Juhu, a luxurious area of ​​Mumbai. Apart from this, she has a collection of many expensive vehicles like Audi Q7, BMW 7 Series, and Marcedes Benz GLE.

Shraddha’s account is present on all social media platforms where she keeps sharing photos and videos with her fans. Shraddha has more than 70 million followers on her Instagram account and has shared more than 1.8k posts with her fans so far.

Shraddha is one of the main actresses of the Bollywood industry who has given stellar performances in many films. We have given below the names of some of her main films.

Her upcoming movies are:

Some Interesting Fact About Shraddha Kapoor:

Que. Is Shraddha Kapoor in a relationship?

Ans. Yes, Shraddha is in a relationship with celebrity photographer Rajiv Shresth.

Que. Who is Shraddha Kapoor’s husband?

Ans. Shraddha Kapoor is not married but according to some reports, she dated celebrity photographer Rajiv Shrestha.

Que. Who has a crush on Shraddha Kapoor?

Ans. Recently, Bollywood actor Tiger Shroff revealed in an interview that he had a huge crush on Shraddha when they were in school.

This is the full details on Shraddha Kapoor Age, Height, Parents, Husband, Biography, Net Worth & More. Share this post with your friends and keep visiting us on celebwale.com for famous personalities and trending people’s biography with updated details. If you have any thoughts, experiences, or suggestions regarding this post or our website. you can feel free to share your thought with us.