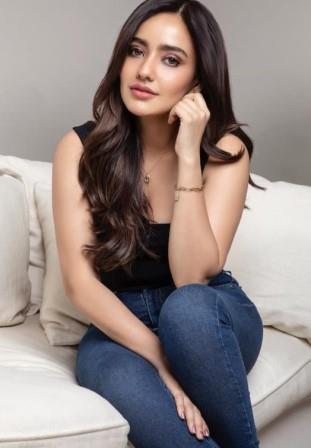 Neha Sharma is an Indian film actress who is famous for her beauty. Earlier, she has made her mark among the people with her superb acting in Bollywood films Crook and Kyaa Super Kool Hai Hum. Neha was born on 21 November 1987 in a political family in Bhagalpur, Bihar. She completed her early education at Mount Carmel School located in Bhagalpur.

Later she moved to Delhi for her higher studies where she completed her graduation in Fashion Designing from the National Institute of Fashion Technology (NIFT), New Delhi. Sharma enjoys cooking, listening to music, reading, and dancing. She does not shy away from doing all these things in her spare time. She is also a trained Kathak dancer. She has trained in dance forms such as Street Hip Hop, Latin Dancing Salsa, Merengue, Jive, and Jazz from Pineapple Dance Studios in London.

She appeared in the ZEE5 web series Illegal in 2020 as Advocate Niharika Singh who was liked by the people. She also worked with Bigg Boss 13 winner Late Sidharth Shukla in the music video Dil Ko Karaar Aaya which proved to be a blockbuster song. The song has got more than 250 million views on YouTube so far.

Earlier she had also worked on Tony Kakkar’s song Dheeme Dheeme. She was also seen in Stebin Ben’s song Thoda Thoda Pyaar in 2021 which has garnered over 420 million views on YouTube so far. She will be seen in the Nawazuddin Siddiqui starrer Jogira Sara Ra Ra in 2022.

Neha Sharma’s age is 34 years in 2022. She is counted as one of the beautiful actresses of Bollywood. Her hot photos keep going viral on social media. She has millions of fans who follow him on social media. She does a variety of workouts in the gym daily to keep her body attractive. Apart from this, she also keeps her body healthy by doing yoga.

Neha was born in a political family in Bhagalpur, Bihar. His family believes in Hinduism and worships Hindu deities. She comes from a prosperous Hindu family. Neha Sharma’s father’s name is Ajit Sharma, who is a Congress MLA from Bhagalpur, Bihar. However, before joining politics, Neha’s father Ajit Sharma was an engineer by profession. But in 2014, he got a ticket from the Congress in the Bihar Assembly elections, on which he won. After that, he also won the 2015 and 2020 Bihar assembly elections.

Neha has been seen with her father many times during election campaigns and rallies. She has also made several election tours with his father. Neha’s mother’s name is Vibha Sharma and she is a housewife. Apart from her parents, Neha is survived by her elder sister Ritika Sharma and her younger sister Aisha Sharma. Her younger sister Aisha Sharma is also a model and actress who has worked with actor John Abraham in the Bollywood movie Satyamev Jayate Part 2.

Neha Sharma also has a brother named Vaibhav Sharma. Her marital status is unmarried. Although Neha’s name has been linked with South actor Ramcharan. They had worked together in the movie Chirutha, after which the closeness between the two was seen. After that Neha’s name has also been associated with Jackky Bhagnani. Neha had worked with Jackky in the Bollywood film Youngistan, after which both became very close to each other.

Talking about Neha Sharma’s total net worth, her net worth is around ₹23 crores. Her main source of earning is from acting in films. Apart from this, she has more than 15 million followers on Instagram, on which she charges up to ₹6 lakh for a post for brand promotion. Neha has done films in every language and has also worked in various commercials.

She earns a total of ₹25 lakh every month from all the sources of her earnings. She earns more than ₹3 crores in a year. She also has a luxurious flat in Mumbai where she lives with her sister Aisha Sharma. She also owns expensive vehicles like Audi A6 and Audi A4.

Some Interesting Facts About Neha Sharma:

Que. Where was Neha Sharma born?

Que. Is Aisha Sharma the sister of Neha Sharma?

Que. Who is Neha Sharma’s father?

Ans. Neha’s father’s name is ‘Ajit Sharma’, who was an engineer and is currently associated with politics. Ajit Sharma is an MLA from Bhagalpur on behalf of the Indian National Congress party.

Que. How old is Neha Sharma?

Que. Who is the sister of Neha Sharma?

Ans. Aisha Sharma and Ritika Sharma is the sister of Neha Sharma.

Que. Who is Neha Sharma dating?

Ans. Currently, there is no news of her dating anyone. Her past relationship was with South actor Ramcharan and Bollywood actor and producer Jackky Bhagnani.

This is the full details on Neha Sharma (Actress) Biography, Age, Height, Father, Husband, Sister, Net Worth & More. Share this post with your friends and visit us on celebwale.com for famous personalities and trending people’s biographies with updated details. If you have any thoughts, experiences, or suggestions regarding this post or our website. you can feel free to share your thought with us.