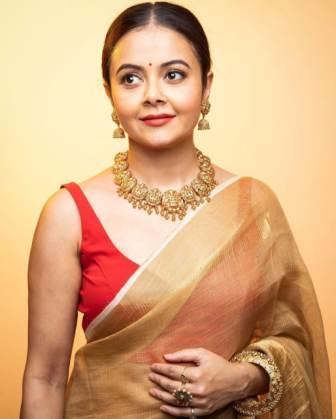 Devoleena Bhattacharjee is an Indian television actress and Bharatnatyam dancer who is mainly known for her acting in Hindi TV serials. Devoleena was born on 22 August 1985 in Sivasagar, Assam in a Bengali Hindu family. Devoleena was very young when her father passed away. After the death of her father, the responsibility of her and her younger brother fell on Devoleena’s mother.

After this, she somehow completed her schooling at Godhula Brown Memorial English High School located in Sivasagar, Assam. After passing her childhood in Assam, she moved to Delhi to complete her college studies. Devoleena completed her graduation in Fashion Designing from the National Institute of Fashion and Technology, Delhi. During her college studies, Devoleena took training in Bharatanatyam.

After graduating from college, she moved to Mumbai to make her career in the entertainment industry where she worked as a jewelry designer at Gili India Ltd. in the early days of her career. Being a trained dancer, she auditioned in the dance reality show Dance India Dance Season 2 of Zee TV in the year 2010 where she got selected. However, she could not do much in the show and was eliminated from the show after a few weeks.

After getting out, Devoleena did not give up and auditioned for roles in TV serials from place to place. Eventually, after a lot of struggles, she got her first break in TV serials and in the year 2011 played the character of Bani Dhillon in NDTV Imagine’s serial Sawaare Sabke Sapne Preeto. After this serial, the real twist in her life came when in the year 2012, actress Giaa Manek left the serial Saath Nibhana Saathiya and Devoleena got a chance to play the role of Gopi in the serial.

She had to face a lot of trouble in the initial days of the show and her role got a lot of negative comments from the audience and the TRP of the show also started falling. But Devoleena worked well on her role for 6 months and seeing the audience started liking her role. In this serial, her role Gopi Bahu was being liked a lot and her long fan following also started increasing.

The show had once again reached number 1 breaking all the TRP records. The character played by Devoleena Bhattacharjee was honored with prestigious television awards like Indian Television Academy Awards, Indian Telly Awards, Big Star Entertainment Awards, and Zee Gold Awards. This popular serial went off the air in the year 2017, after which Devoleena appeared in the character of Manorama in only episodes of the serial Laal Ishq.

While playing the role of Gopi Bahu in Saath Nibhana Saathiya, Devoleena made guest appearances in shows like Iss Pyaar Ko Kya Naam Doon, Yeh Rishta Kya Kehlata Hai, Diya Aur Baati Hum, Yeh Hai Mohabbatein, and Kumkum Bhagya. After reaching the heights with the role of Gopi Bahu, Devoleena started falling into some controversies. Her name was also involved in a murder case but later she was given a clean chit by the police.

After joining the controversy, Devoleena Bhattacharjee got a chance to appear in Colors TV’s most popular and controversial show Bigg Boss 13. In Bigg Boss 13, Devoleena became popular for her Bahu bani Babe. However, after performing well in the show, she walked out on the 63rd day due to her health issue.

Devoleena Bhattacharjee’s age is 36 years old in the year 2021. She is a prolific actress in the Hindi TV industry who is known for her role in Gopi Bahu. Talking about her fitness, she pays a lot of attention to her health and does various exercises in the gym every day, which keeps her body fit. Devoleena starts her day with running and then does rope skipping.

Devoleena was born in a Bengali Hindu family in Sivasagar, Assam. His entire family believes in Hinduism and worships Hindu deities. The name of Devoleena’s father is not known but her father died when she was very young. After the death of his father, the responsibility of him and his younger brother had fallen on her mother.

However, after a few years, his entire family shifted to Gurugram, Haryana. Devoleena Bhattacharjee’s mother’s name is Anima Bhattacharjee. Apart from her mother in Devoleena’s house, there is also a younger brother named Andeep Bhattacharjee.

Talking about Devoleena’s marital status, she is still unmarried, due to which her husband’s name is not known. Although talking about her affair, according to sources, Devoleena has had an affair with her co-star and boyfriend Vishal Singh. She met Vishal for the first time on the sets of Saath Nibhana Saathiya. In the show, there was a relationship of brother-in-law between the two. When Vishal Singh came to support Devoleena in Bigg Boss 15, the actress called Vishal her good friend.

Now Devo has shared a photo with Vishal Singh on his Instagram, in which Vishal is seen exchanging an engagement ring. Sharing these pictures full of love, the couple wrote the caption – It’s official. With this, the couple has made a ring and heart emoji. Both have expressed their love for their partner in their post. In one of the pictures, Vishal Singh was also seen proposing to Devoleena Bhattacharjee on their knee.

Talking about the total net worth of Devoleena Bhattacharjee, her net worth ranges from around ₹7 crores to ₹9 crores. She charges around ₹40k to ₹60k per episode. Apart from this, Devoleena also charges lakhs of rupees by doing paid promotions through her social media.

Devoleena has a YouTube channel named Devoleena Bhattacharjee The OMG Girl which has more than 600k subscribers. She keeps on uploading day-to-day vlogs on her YouTube channel, on which millions of views come from which she earns money in lakhs. Apart from this, in the year 2021, she took entry through the wild card, for which she is charging around ₹3 lakh to ₹5 lakh every week.

Devoleena Bhattacharjee started her TV career as a contestant in the dance TV reality show Dance India Dance 2. After this, she started her career in TV serials with NDTV Imagine’s serial Sanware Sabke Sapne Preeto, in which she played the role of Bani Dhillon.

After this, in the following year 2012, she played the character of Gopi Bahu in Star Plus’s popular serial Saath Nibhana Saathiya, which proved to be the turning point for her career. In the table below, we have given the list of all her television shows.

Apart from being an actress in the TV industry, Devoleena Bhattacharjee has also tried her luck in web series. She first made her debut in the year 2018 with the Ullu web series Sweet Lie in which she played the character of Sonali Ashish. After this, she appeared in Disney + Hotstar’s web series Lunch Stories, released in 2021. In the table below, we have given a list of all her web series, which you can read once.

Apart from TV serials and web series, Devoleena has also worked in some music videos. She was seen in the devotional video Hey Gopal Krishna Karu Aarti Teri released in 2017 which received a lot of love from the audience and the video proved to be a hit. After this, she was seen in an Assamese video Ramdhenu in 2019.

Talking about the awards and achievements of Devoleena Bhattacharjee, she first came into the limelight with her role Gopi Bahu in the Star Plus TV serial Saath Nibhana Saathiya. Her role in this serial got a lot of love from the audience, which became known in every household. Due to this role, she was given the Indian Television Academy Award in the category of Best Actress in the year 2013. In the table given below, we have given a list of all her awards and achievements, which you must read once.

In one of the videos, Devoleena is first seen in a no-makeup look but then her look changes in the blink of an eye. Devoleena just claps while standing in front of the camera and she starts appearing in a glamorous look from a very simple look. Devoleena is wearing a white color saree in the video. With this, she is wearing a designer blouse. Fans are very fond of this white sari look of Devoleena.

In this post, Devoleena has also mentioned her craze about saree. In many photos of Devoleena, her fans praise her look fiercely. In the comment box, many keep commenting praising Devoleena’s look. Apart from this, she is also present on Facebook where more than 1.7 million people follow him.

Wikipedia has also covered Devoleena Bhattacharjee on its page. Apart from this, she is also present on Twitter where she shares her thoughts with more than 90k people through tweets. In the table below, we have shared the links of all her social media profiles with you, by clicking on which you will be able to access his profile page directly.

Devoleena Bhattacharjee is a prolific artist in the Hindi TV industry. She is known for her role as Gopi Bahu in Hindi TV Industry. She has earned a lot of names by her hard work, when she was at the heights, only then did her names start getting associated with some controversies. At first, while giving an interview to a news portal, Devoleena said that the set of the serial Saath Nibhana Saathiya is haunted.

There are many paranormal activities happening there that upset the cast and crew of the show but this thing was not liked by the makers and production house of the show. After which there was a lot of anger between Devoleena and the makers. After this, in the year 2018, Devoleena was caught in a murder case. She was involved in the murder case of diamond merchant Rajeshwar Uddhani.

Reportedly, when the police were investigating the murder case, it was found that the murderers were identified with Devoleena. Not only this, Devoleena’s contact number and some call records were also found in Rajeshwar Uddhani’s mobile, which confirmed her involvement in this case. After which Devoleena had to make rounds of the police station several times, but after some investigation, Devoleena was reported to have got a clean chit by the police.

Some Interesting Fact About Devoleena Bhattacharjee:

This is the full details on Devoleena Bhattacharjee Biography, Wiki, Age, Family, Husband, Net Worth & More. Share this post with your friends and keep visiting us on celebwale.com for famous personalities and trending people’s biography with updated details. If you have any thoughts, experiences, or suggestions regarding this post or our website. you can feel free to share your thought with us.