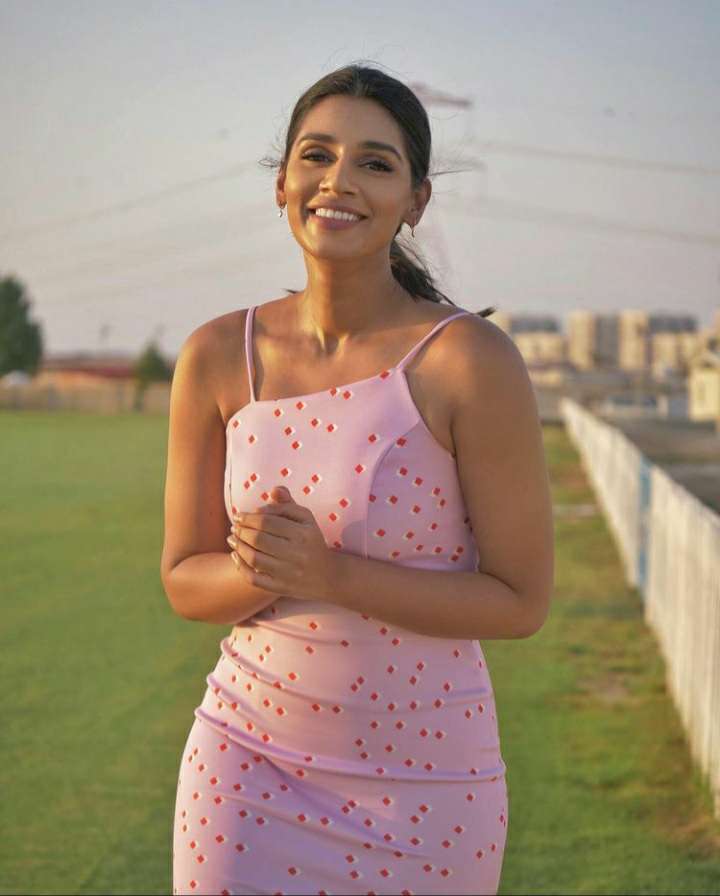 Sanjana Ganesan was born on 6 May 1991 in Pune Maharashtra. She did her early education in Pune. Sanjana completed her high school and intermediate education at The Bishop School. Then, she took admission to the Symbiosis Institute of Technology while continuing her further studies. From where she did B.Tech in Computer Science. She was a gold medalist during her college studies.

After finishing college in 2012, Sanjana participated in the 2012 Femina Style Diva Fashion Show as a contestant. She was a finalist in this fashion show. After finishing B.Tech, Sanjana started her job at CDK Global which was an IT and digital marketing company. She joined this company as a software engineer. She was also doing modeling during her job as well as modeling.

After this, in 2014, Sanjana did participate in the MTV reality show MTV Splitsvilla Season 7 as a contestant. In this show, she was performing with Ashwini Kaul and she also entered into a relationship with him.

“although I was comfortable in front of the camera there were a lot of things with which I had to learn to become a good sports anchor”.

Sanjana Ganesan is an Indian model and actor, who hosts events for many sports such as cricket badminton football for the Star Sports Channel. She hosts a show named Match Point during the Indian Premier League IPL. Sanjana has also been hired by the IPL team Kolkata Knight Riders KKR for their exclusive shows.

In this show, Bollywood King actor Shah Rukh Khan has been seen as a guest appearance several times. Apart from hosting the show during the IPL, Sanjana also hosts the program of sports like Indian Super League Football and Badminton Super League. She also hosts the program Dil Se India which schedule at the time of the ICC Cricket World Cup tournament held in 2019 was hosted by Sanjana on behalf of India.

She is one of the few sports presenters who keep interviewing the team’s coaches and members even on the cricket field. She described her World Cup experience in an interview as

“The World Cup Experience Was One Of a Kind, And It Was The Best Thing That Could have Happened To Me”.

She hosted a program called Dil Se India during the ICC Cricket World Cup. Talking about Sanjana Ganesan’s married life, her marital status is married. She recently married Jasprit Bumrah, the Indian cricket team’s fast bowler, on the date of 15 March 2021. She is also in the news after marrying Jasprit Bumrah.

Sanjana Ganesan has won many awards in her life, we are giving below the list of the names of all her awards, which you must read once.

Sanjana Ganesan’s age is 31 years old in 2023. She looks very beautiful and hot in appearance, which can attract a lot of people towards her. To maintain her body, she goes to the gym every day, where she does different workouts.

She also worries about her health and takes very small meals to keep her body healthy. Her height is 5’7″ feet or 170 cm and her body weight is around 55 Kg or 121 lbs. She has beautiful long dark brown hair and black eyes.

In addition to her parents, Sanjana’s family also has a younger sister named Sheetal Ganesan, who is a dentist by profession. Talking about Sanjana Ganesan’s love life, when she participated in MTV Splitsvilla season 7, she got into a relationship with contestant Ashwini Kaul.

However, this affair did not last long and they had a breakup in 2015 itself. After this Sanjana Ganesan married Indian fast bowler Jaspreet Bumrah on 15 March 2021. So now Sanjana Ganesan’s husband’s name is Jasprit Bumrah.

Talking about Sanjana Ganesan’s favorite things, her favorite Bollywood actors are Ranveer Singh and Ayushman Khurana. Her favorite actress is Deepika Padukone. While Sanjana’s profession is associated with cricket, her favorite cricketer is Mahendra Singh Dhoni.

She is also very fond of listening to songs and keeps listening to Bollywood songs in her spare time. Her favorite singer is Sunidhi Chauhan. In the table below, we are giving a list of all their favorite things that you must read once.

Sanjana’s account is present on all social media platforms, where she keeps uploading her hot photos modeling technic, a short video that keeps her in the headlines. she is popular on social media due to her hotness. Below we are sharing the links to all their social media accounts with you, by clicking on them you will be able to access their profile directly.

Some Interesting Facts About Sanjana Ganesan:

This is the latest information on Sanjana Ganesan Biography, Age, Height, Family, Father, Husband, Net Worth & More. Share this post with your friends and keep visiting us on celebwale.com for famous personalities and trending people’s biography with updated details. If you have any thoughts, experiences, or suggestions regarding this post or our website. you can feel free to share your thought with us.