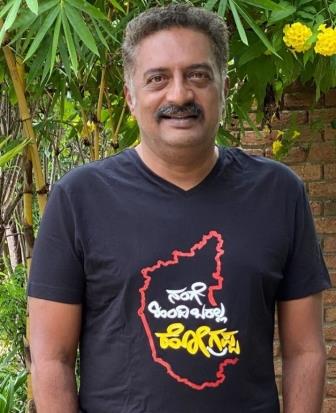 He was born on 26 March 1965 in Bangalore, Karnataka. He did his early studies at St. Joseph’s Indian High School, Bangalore. After that, he Graduated in Commerce from St. Joseph’s College of Commerce, Bangalore. Prakash Raj’s real name was Prakash Rai. He later changed his surname to Raj on the advice of film director K. Balachander. In the early days of his career, he did stage shows one after the other, for which he used to get ₹300 a month. He has done around 2000 street theatrical performances.

Prakash started his television career with Doordarshan dramas Bisilu Kudure and Guddada Bhootha. He started his acting career in 1990 with the Kannada film Muthina Haara in which he was seen in the role of Jai Singh. After working in Kannada serials and movies, Prakash made his Tamil debut with Balachandra’s film Duet, released in 1994. The film was a commercial hit at the box office. Earlier in 1993, he made his Hollywood debut as a police officer in the English film Tropical Heat.

Earlier he had appeared in the role of a sharpshooter in the 2002 Hindi film Shakti – The Power. He became the third South Indian actor after Rajinikanth and Kamal Haasan to make a mark in South as well as Hindi films. After the departure of the legendary actor Amrish Puri, who was the villain of Bollywood, Prakash Raj worked to fill the place of villain in Hindi films. He played the role of a dangerous villain in Bollywood films like Singham, Wanted, and Dabangg 2 which all proved to be blockbusters at the box office.

After acting, he has also directed some films which include films like Naanu Nanna Kanasu, Dhoni, and Manavoori Ramayanam / Idolle Ramayana. The movies produced by him are Dhaya, Naam, Azhagiya Theeye, Kanda Naal Mudhal, Poi, Mozhi, Velli Thirai, Abhiyum Naanum, Puttakkana Highway, Arishadvarga, and Dhoni. Prakash began his political career after the assassination of his journalist-turned-activist friend Gauri Lankesh.

Prakash Raj’s height is 5 feet 9 inches, which is equal to 175 centimeters. His body weight is about 74 kg, he takes a proper diet to keep his body fit so his body measurement is not known. His eye color is brown and his hair color is Black.

Prakash was born in a lower-middle-class family in Bangalore. His entire family believes in Hinduism. But he himself is an atheist. His real name is Prakash Rai. Prakash Raj’s father’s name is Manjunath Rai and his mother’s name is Swarnalatha Rai. His father was a Tulu while his mother was a Kannada. He also has a younger brother named Prasad Raj and who is also an actor.

Prakash’s marital status is married. Prakash Raj’s first wife’s name is Lalitha Kumari whom he married in 1994. Prakash had two daughters Meghna and Pooja and a son Sidhu from his first wife. His son Sidhu died in 2004. He later divorced his first wife Lalita in 2009 due to personal reasons. After that on 24 August 2010, Prakash did his second marriage to Pony Verma. His second wife Pony gave birth to a son Vedanth in 2015.

All the information regarding the total net worth of Prakash Raj is given in the table below.

Some Interesting Facts About Prakash Raj:

This is the full details on Prakash Raj Biography, Age, Height, Wife, Family, Caste, Daughter, Brother, Net Worth & More. Share this post with your friends and visit us on celebwale.com for famous personalities and trending people’s biographies with updated details. If you have any thoughts, experiences, or suggestions regarding this post or our website. you can feel free to share your thought with us.