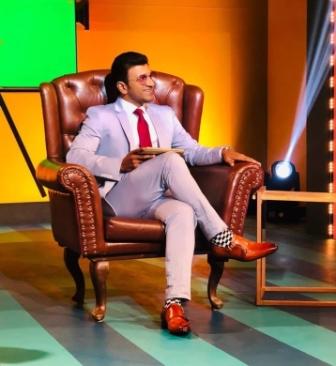 The real name of Puneeth Rajkumar was Lohith Rajkumar. When Puneet was just 6 months old, director V. Somashekar cast him in the role of a newborn in his film Premada Kanike (1976). When he turned 1 year old, he played the role of a child artist in the film Sanaadi Appanna. After this, he appeared as a child artist in the films Thayige Thakka Maga (1978) and Vasantha Geetha.

When Puneeth turned 6, his entire family shifted to Mysore. Puneeth’s father Dr. Rajkumar is an Indian Kannada film actor and producer. Due to his father being associated with the film industry, Puneeth did not face any problem working in films as a child actor. When he was just 10 years old, his father used to take him and his sister on the sets of films, due to which Puneet got a lot of help in learning the nuances of acting.

He played the role of Bal Krishna in the Kannada film Bhoomige Banda Bhagavantha. After this, he recorded his first song Baana Daariyalli Soorya in the Kannada film Bhagyavantha released in 1982. In the same year, he was also seen in the films Chalisuva Modagalu and Hosa Belaku. Although Puneet has worked as a child artist in many films in his life, the film Bettada Hoovu released in the year 1985 proved to be the biggest film of his career.

He was given the title of Best Child Artist at the 33rd National Film Awards for his brilliant child artist role in this film. He continued to be active in films as a child artist but made his debut in the film industry as a lead actor with the 2002 film Appu. Actress Rakshita appeared with him in this film. Puneet’s dancing skills in the film were appreciated by the critics. His song Taliban Alla Alla in this film also became very popular.

The film was a multilingual action film in which Puneeth played the character of Janakirama “Jackie”. His excellent acting in this film was appreciated by the film critics and the audience. After working his magic in films, Puneeth turned to the television industry. Where he hosted the television shows Kannadada Kotyadhipati Season 1 & Season 2, Family Power (2017-18), and Kannadada Kotyadhipati (2019).

He has also judged Udaya TV’s show UPstarters (2014). He also appeared as a guest on the television Dance Karnataka Dance and Dance Dance in 2021. Apart from this, he was also the producer of the television serial Netravathi which was telecasted on Udaya TV. Puneeth also produced some films in his career which included films like French Biryani (2016), Law (2016), and Mayabazar (2016).

Puneeth has won the hearts of the audience many times with his brilliant performance in films. Impressing everyone with his acting, he has won the National Film Awards 1 time, Karnataka State Film Awards 6 times, SIIMA Awards 4 times, and Filmfare Awards 5 times in his career. Apart from this, he has won 10 additional awards and has been nominated a total of 35 times.

Puneeth Rajkumar’s age was 46 in the year 2021. He was one of the highest-paid actors in the Kannada film industry and was known for his fitness and well-being. Even at the age of 46, he kept himself quite fit. He was one of the youngest and fittest actors in the Kannada film industry. He was very conscious about his fitness and used to burn calories by working out in the gym for hours.

Apart from this, he was adept at doing backflips and also shared videos of his backflips on social media. He believed that any day is a waste without a workout. Although as usual, he went to the gym to work out in the gym, who knew it would be his last day?

Today, on 29 October 2021, he went to the gym to work out as usual, where he suffered a heart attack while working out, after which he was admitted to the hospital. Doctors declared him brought dead at 11:30 am.

Puneeth Rajkumar’s height is 5 feet 9 inches, which is equal to 175 centimeters. His body weight is about 77 kg, he takes a proper diet to keep his body fit so that his body measurement is 43-33-15. His eye color is Dark Brown, and his hair color is also Black.

Puneeth Rajkumar was born into a prosperous Hindu family in Madras (now Chennai). His entire family worships Hindu deities and believes in the Hindu religion. Puneeth Rajkumar’s father’s name was Rajkumar and he was a superstar actor in the Kannada film industry. He had proved his acting iron by playing the lead role in many films.

Puneeth Rajkumar’s mother’s name is Parvathamma Rajkumar, who was a film producer and distributor. Apart from his parents, 5 siblings live in Puneeth’s house. He is the youngest among the five siblings. Puneeth Rajkumar’s elder brother’s name is Shiva Rajkumar, who is the main and most popular actor in the Kannada film industry and has won the hearts of people with his acting in many films.

He has another brother named Raghavendra Rajkumar and who is a film producer and actor. Puneeth also has two sisters named Lakshmi Rajkumar and Poornima Rajkumar. Talking about Puneeth’s marital status, he is married and has 2 daughters as well. Puneeth Rajkumar’s wife’s name is Ashwini Revanth and the two met through a common friend.

After meeting, their friendship turned into love, and eventually, Puneeth and Ashwini got married on 1 December 1999 with the consent of the family. After marriage, Puneeth’s wife Ashwini Revanth gave birth to two daughters, named Drithi and Vandita. The ages of both the daughters of Puneeth are 12 and 10 years respectively.

Talking about the total net worth of Puneeth Rajkumar, his net worth is around ₹37 crores and his monthly earnings are around ₹50 lakhs. Puneeth’s main source of earning is acting in films and apart from this he also endorses many brands from which he earns a lot of money. Apart from this, he is also a film producer.

Puneeth also has a great singer who has also shown his singing skills in many films. This is the reason that his love for music was especially due to which he also created a YouTube channel named PRK Audio which has more than 1 million subscribers. He also earns a lot of money from his YouTube channel.

Puneeth was the brand ambassador of the Indian Premier League team Royal Challengers Bangalore. Apart from this he also owns a team at Premier Futsal, Bengaluru 5. He was known to lead a luxurious life who had no shortage of money. He has many luxury vehicles like Audi, BMW, Mercedes, etc.

Puneeth Rajkumar’s account is present on all social media platforms where he used to share information about his upcoming projects and films with fans. His account is present on Instagram where he has more than 1.6 million followers and the number of posts is around 453. Apart from his latest and personal photos, he used to share fitness-related videos and photos on his Instagram account, which was well-liked by his fans.

He also has a YouTube channel and name of the channel is PRK Audio which has more than 1.3 million subscribers. In the table below, we have shared the links of all their social media profiles with you, by clicking on which you will be able to access their profile page directly.

A heartbreaking sad news is coming from the film industry of the South. Kannada film superstar Puneeth Rajkumar has passed away. He was admitted to the ICU of the hospital after a cardiac arrest on the morning of Friday 29 October. It is being told that he died during treatment. Apart from films, people associated with sports and politics have expressed grief over the death of Puneet.

After the death of Puneeth Rajkumar, Vikram Hospital said in its media statement, ’46-year-old Puneeth Rajkumar was brought to Vikram Hospital on 29 October 2021 after a heart attack. His family doctor had confirmed a heart attack through ECG. At the time of being brought to the emergency, the patient was completely unconscious and there was no movement in his heart.

Therefore, an attempt was made to revive him immediately through advanced cardiac life support. Even after trying for a long time, there was no response from the patient and the heart did not start beating. The panel of medical experts tried their best to save him. After this, he was declared dead at 2.30 pm.

It is reported that like every day, Puneet was working out in the gym on Friday morning. While working out, he suddenly had a cardiac arrest, after which he fell there. Puneet was immediately admitted to the ICU of Vikram Hospital. Puneet was only 46 years old at this time. The news of Puneeth’s death has created a wave of sadness among the entire Kannada film industry and its fans.

Thousands of fans have gathered outside the hospital after the news of Puneet’s death came out. The Karnataka government has issued an alert on Puneet’s death and ordered the immediate closure of all cinema halls in the state.

Actor Siddharth wrote – I cannot believe that you have left us, Puneet. Kind, talented, fearless… you gave so much to this world. It’s not okay bro. My heart is broken. Virender Sehwag tweeted, ‘Deeply pained to hear the news of Puneeth Rajkumar’s demise. What a noble and decent person, his passing is a big setback for Indian cinema. may his soul rest in peace.

Some Interesting Facts About Puneeth Rajkumar:

This is the full details on Puneeth Rajkumar Biography, Wiki, Age, Death Reason, Height, Family, Wife, Daughter, Children, Net Worth 2021 & More. Share this post with your friends and keep visiting us on celebwale.com for famous personalities and trending people’s biography with updated details. If you have any thoughts, experiences, or suggestions regarding this post or our website. you can feel free to share your thought with us.