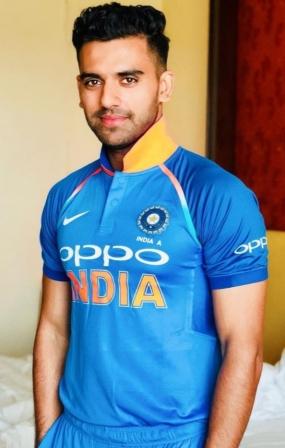 Deepak Chahar is an Indian cricketer who is known for playing international cricket matches for the Indian cricket team. She was born on 7 August 1992 in Agra, Uttar Pradesh. Deepak’s full name is Deepak Lokendrasingh Chahar. He is selected on the team as an all-rounder. Deepak is a right-arm medium-pace bowler and a lower-order batsman.

Deepak is a bowler and as well a batsman who also strengthens the lower batting order of the team. He likes to play for Chennai Super Kings in the Indian Premier League (IPL). He is the only fast bowler to take a hat-trick in T20 International cricket. He completed his schooling in Agra, and later he shifted to Jaipur along with his family for cricket training.

He has been taking cricket training since the age of just 10. Deepak’s father Lokendra Singh Chahar had resigned from the Indian Air Force job so that he could give full attention to Deepak’s cricketing career. He used to take him on a bike from Surat to the cricket academy in Hanumangarh every day so that he could do his 6-hour cricket practice.

Deepak’s father had enrolled him at the age of 10 in the Zila Cricket Academy, Jaipur, where he first got acquainted with his coach Navendu Tyagi. In 2008, he was rejected by Greg Chappell, former director of the Rajasthan Cricket Association Academy, saying that he could not play higher-level cricket.

But after getting rejections, he did not give up and worked hard day and night to make his debut for Rajasthan in 2010 in domestic-level T20 cricket against Vidarbha in Jaipur. In November 2010, he made his first-class debut for Rajasthan against Hyderabad at Jaipur. In 2011 he was bought by the IPL franchise Rajasthan Royals but did not get a chance to debut in the IPL.

In his debut match, he took 8 wickets for 10 runs in just 7.2 overs against Hyderabad and bundled out the entire team of Hyderabad for 21 runs, the lowest score in the history of the Ranji Trophy. His sharp swing bowling caught the attention of IPL’s temporary franchise team Rising Pune Supergiant. Where Deepak was part of the team from 2016 to 2018.

However, being a fast bowler, he also had to suffer many injuries. He was troubled by injuries for 3 consecutive years, which badly affected his cricket career. He then made his comeback from the Saqlain Mushtaq Ali Trophy, taking 5 wickets in a T20 match which was his best performance in domestic T20 cricket.

With this performance, he caught the attention of the IPL franchise Chennai Super Kings and in the IPL auction 2018, he was bought by CSK for ₹80 lakh and making him a part of their team. He has been a staple of the CSK team since 2018 and has dismissed good batsmen with his bowling.

After this, Deepak was included in the Indian T20 squad in the 3 T20 match series against the Bangladeshi team that toured India where he played a key role in India’s series win. In the final match of the series, Deepak Chahar performed brilliantly in his international career, taking a total of 6 wickets for just 7 runs in 3.2 overs.

On 20 July 2021, Deepak Chahar scored his maiden ODI half-century in an ODI against Sri Lanka. In September 2021, Deepak has been included in the Indian team for the ICC Cricket World Cup T20 2021 tournament as a reserve player.

Deepak Chahar’s age is 30 years old in the year 2023. He is a prolific fast bowler of the Indian team who is also known for his useful batting in the lower order. Talking about fitness, Deepak also remains in the headlines for his body. He keeps sharing photos and videos related to his workouts on Instagram, on which many likes and comments come from fans.

If you are in the playground, then you have to be fit and fit not only in mind but also physically so that you can run fast on the cricket field as well. This is the reason that Deepak is also very cautious about his fitness. She has a physical body like a model. While fielding on the cricket field, you have to run a lot to stop the runs of the opposition team, for which Deepak pays more attention to the exercise of his legs.

Apart from workouts, he also does cycling to strengthen the leg muscles. He works very hard to make his arms strong so that he can bowl at full strength. Apart from this, he also exercises for hours in the gym. Let us tell you that ever since BCCI has made it necessary to pass the YOYO fitness test to join the Indian cricket team.

Since then all the players are very careful about their fitness and work hard to keep their bodies fit. Apart from exercise, he also takes special care of his diet and avoids eating oily things. He also regularly consumes green fresh fruit juices so that his health can be fine.

Deepak Chahar’s height in feet is 5 feet 11 inches, which is 180 centimeters. His body weight is 75 kg and Chahar’s body measurement is 30-30-14. His eye color is Black and his hair color is also Black.

Deepak Chahar was born in a prosperous Hindu family, he belongs to Hinduism and also worships Hindu deities. Deepak Chahar’s father’s name is Lokendra Singh Chahar and was employed in the Indian Air Force but he resigned from his Air Force job to give full attention to his son’s cricket training. Deepak’s father left his job and inspired him to concentrate on cricket and he used to take him on his bike to get training at Hanumangarh Cricket Academy, 50 km from Surat. Deepak can never forget the dedication of his father.

Deepak Chahar’s mother’s name is Pushpa Chahar and she is a housewife. Apart from his parents in Deepak’s house, there is also an elder sister named Malti Chahar. Malti is an Indian film actress who has also appeared in many films. Apart from this, Deepak has grown up with his cousin Rahul Chahar. Rahul Chahar is also a cricketer who plays for Mumbai Indians in IPL and is set to make his international debut with the Indian team.

Talking about Deepak’s marital status, he is still unmarried. But after the match between Chennai Super Kings and Punjab Kings in IPL 2021, a special sight was seen in the stadium. When the match was over, Deepak Chahar proposed to her girlfriend Jaya Bharadwaj sitting in the audience on his knees in a very romantic way and also wearing her engagement ring. After which her girlfriend Jaya Bhardwaj also hugged Deepak saying yes.

The special thing about this whole scene was that everything was being shown on live TV, where the whole world saw how Deepak proposed to her girlfriend in front of everyone. After this, Jaya’s brother Siddharth Bhardwaj also congratulated her sister and Deepak as well as congratulated Deepak for proposing on live TV. It is expected that by the end of 2021, Deepak and Jaya will tie the knot.

Talking about the total net worth of Deepak Chahar, his total net worth is around ₹15 crores to ₹20 crores. He is a talented young right-arm medium-fast bowler from Uttar Pradesh who has represented India in all formats of cricket except test matches. Deepak has been playing domestic cricket for Rajasthan State since 2010. His main source of earnings is cricket and plays international cricket for Team India and plays in IPL for CSK. In domestic cricket, he attracted the attention of IPL team owners.

Firstly, the IPL team Rajasthan Royals bought him for 20 Lakh in 2011. Then he stay with Rajasthan Royal After which in the year 2016, he was bought by the IPL team Rising Pune Super Giants till 2016. following the year 2018, he was included in his team by Chennai Super Kings at 80 Lakh, since then he has been the main bowler of the CSK team’s bowling attack.

With the inclusion of the Test team, he was hopeful that the BCCI would give him a central contract, which would further increase his earnings. But the BCCI, while not doing so, has included him in the team only based on match payment. Deepak Chahar is currently paid a fee of ₹6 lakh for an ODI match and around ₹3 lakh for a T20 match. According to some reports, Deepak has a total net worth is around 15 to 20 crore.

Deepak Chahar’s verified account is present on all social media platforms except Facebook, where he shares his sports photos, and personal and family photos with people. His account is present on Instagram where he shares his new pictures with his fans. On Instagram, he has more than 1.5 million followers and the number of his posts is more than 250. He is also available on Twitter, where his account has got a blue tick from Facebook, which makes it easy for new people to connect with him.

He has more than 300K followers on his Twitter page. He is not available on Facebook right now. Wikipedia has also covered Deepak Chahar on its page. In the table below, we have shared the links to all their social media profiles with you, by clicking on them you will be able to access their profile page directly.

Some Interesting Facts About Deepak Chahar:

This is the full details on Deepak Chahar Biography, Age, Height, Father, Family, Wife, Girlfriend, Net Worth & More. Please share this post with your friends and keep visiting us on celebwale.com for famous personalities and trending people’s biography with updated details. If you have any thoughts, experiences, or suggestions regarding this post or our website. you can feel free to share your thought with us.