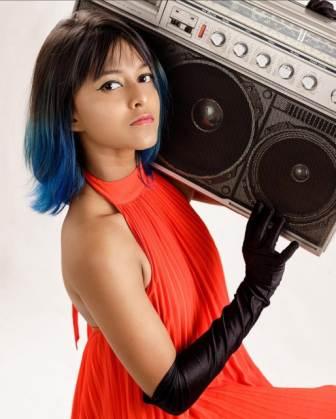 Yohani is a Sri Lankan Singer, Songwriter, Rapper, and YouTuber who is known for her song Manike Mage Hithe. She was born on 30 July 1993 in Colombo, Sri Lanka. Yohani’s full name is Yohani Diloka de Silva but fans know her only by her stage name. She grew up in Colombo and completed her schooling at Visakha Vidyalaya there. During her school days, she was involved in different sports where she used to participate in sports as a famous swimmer and water polo player.

Due to his father being an army officer, she got an opportunity to live in many cities of Sri Lanka. She was attracted to music since childhood and also started practicing music. It was her mother who recognized Yohani’s musical talent and inspired her to pursue this passion at an early age. Her mother helped him to learn piano and also took professional piano training from some teachers.

Apart from this, she also learned to play the guitar with the help of YouTube videos. After finishing her schooling, she moved to the United Kingdom (UK) where she received professional training in music. After taking music training, she came back to Sri Lanka and continued her further education along with her music. She enrolled at General Sir John Kotelawala Defense University, Colombo to pursue her graduation.

From this college, she obtained her graduate degree in Logistics Management and Professional Accounting. During her college days, she created her own YouTube channel, on which she only uploaded the cover songs she sang. In the year 2016, she made her debut on YouTube with her first song Pehla Nasha / Penena Nisa which got a decent response from the audience.

She then went to Australia for her master’s degree. There she obtained her master in Professional Accounting from CQ University, Rockhampton North, Australia. She released her rap cover song Deviyange Bare in the year 2018, which made her a bit popular. After this, she gained popularity from her YouTube videos Dushyanth Weeraman (2019), and Sulaga Nuba Wage (2020).

After this, in the year 2020, she was associated with Sri Lankan music writer Dilanjan Seneviratne’s music label Pettah Effect. Under this music label, she sang popular songs like Merry Christmas Baby, Aaye, and Sitha Dawuna. She also sang songs like Rawwath Dasin (2020), and Haal Massa (2021) under the Theewra Music label.

In the year 2021, the most popular song sung by Yohani, Manike Mage Hithe, was released on YouTube, which was made under the C Music label. The song garnered over 178 million views, breaking all the records for views on YouTube. This song became very popular not only in Sri Lanka but also abroad. The lyrics of the song were in the Singla language, so even though the song was not understood, it was well-liked because of the great music and voice.

Her’s song was so loved in India that star Bollywood actors Amitabh Bachchan, Madhuri Dixit, and Tiger Shroff created Instagram reels of the song. Apart from this, a video made by an air hostess on the song Manike Mage Hithe also went viral on social media and got a lot of popularity. After this, she became a celebrity overnight, who started getting calls from India, after which she went to India and did many live concerts.

There she also appeared in Colors TV’s popular shows Bigg Boss 15 and The Big Picture where she performed with Ranveer Singh on this song. She got a chance to sing the female title track of the Bollywood film Shiddat. Now she will also sing the Hindi version of the song Manike Mage Hithe from the film Thank God to be released in 2022 next year.

In an interview, when she was asked how she got the offer of this song, she replied by saying that.

“It started with a TikTok video. I created the song with just a piano, sitting in front of my phone. It did well, and then – the producer of the song, Chamath Sangeeth of then called me and said, “Do you want to sing the whole song?” We then recorded the song even when the lockdown in Sri Lanka was on. The original song is sung by Satheeshan Rathnayaka and the lyrics were written by Dukan ARX.”

Yohani’s age is 29 years old in 2022. She is a Sri Lankan singer who is famous all over the world for her song Manike Mage Hithe. Talking about her fitness, she is very conscious about her fitness and exercises for hours in the gym to maintain her fitness. Apart from this, she also dances so that her body remains fit. To take care of her health, she likes to take nutritious food so that her body can remain healthy.

Talking about her physical appearance, she looks very attractive and beautiful from her body. She is not a minor girl. The height of Yohani is 5 feet 4 inches, which is 163 cm. She is still very young, so her weight is only 55 kg. Her brown eyes and brown hair add beauty to her beauty.

She was born into a prosperous Christian family. Yohani’s father is Prasanna de Silva, a Major General in the Sri Lankan Army. Her mother’s name is Dinithi de Silva, a former air hostess in Sri Lankan Airlines. Apart from his parents in her house, there is also a younger sister named Shavindri de Silva. Her younger sister Shavindri is studying medicine in Sri Lanka. Talking about Johani’s marital status, she is still unmarried. The name of Yohani’s boyfriend is not known as the news of their affair is not present on the internet media.

Talking about the total net worth of Yohani, then her total net worth ranges from about ₹5 crores to ₹8 crores. Her main source of income is from singing. She does many live concerts shows in the country and abroad, for which she charges up to lakhs of rupees. Apart from this, she also has a YouTube channel where she keeps uploading her sung hit songs, on which millions of views come, due to which she earns in lakhs.

Her account is present on all social media platforms where she shares information about her upcoming singing projects with her fans. She has an account on Instagram where she has more than 750k followers and the number of her posts is more than 350. Apart from personal photos, she also does sponsor posts on her Instagram, for which she charges a reasonable amount.

Apart from this, She is also present on Facebook where she has about 1.1 million followers. They were also covered by Wikipedia on their page. She is also present on Twitter where she has 17k followers with whom she shares her thoughts through tweets. In the table below, we have shared the links of all his social media profiles with you, by clicking on which you will be able to access her profile page directly.

Some Interesting Facts About Yohani:

This is the full details on Yohani Singer Biography, Age, Height, Full Name, Family, Affairs, Husband, Net Worth & More. Please share this post with your friends and keep visiting us on celebwale.com for famous personalities and trending people’s biography with updated details. If you have any thoughts, experiences, or suggestions regarding this post or our website. You can feel free to share your thought with us.