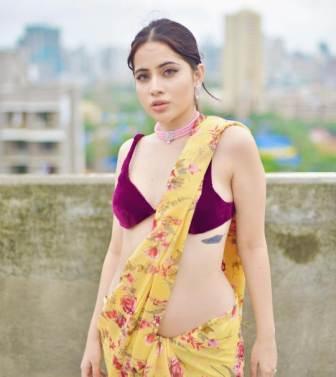 Urfi Javed is an Indian model and actress who is predominantly known for her work in Hindi television serials. She has been in the constant limelight ever since she joined Bigg Boss OTT as a contestant. Urfi was born on 15 October 1996 in Gomti Nagar, Lucknow. She received her early education from City Montessori School in Lucknow. After this, she joined Amity University in Lucknow to pursue her graduation.

After that, she got a job in a call center, after which her condition started improving. She worked as an assistant to a fashion designer in Delhi before moving to Mumbai. After that, she moved to Mumbai where she started modeling and also did ramp walks in some fashion shows. She auditioned for roles in many serials. Finally, in 2015, she got a chance to debut in the TV industry for the first time with the TV serial Tedi Medi Family.

In the year 2021, she came to the limelight for the first time by participating in Bigg Boss OTT as a contestant. Apart from this, she has appeared in Alt Balaji’s web series Puncch Beat Season 2. She played the character of Meera in this web series produced by Ekta Kapoor.

Urfi Javed’s age is 25 years old in the year 2022. She is one of the fittest Indian television actresses because of her basic fitness routine. Urfi likes to work out in the open where she does intense cardio workouts like jogging and running. She also practices several HIIT workouts mainly for her cardio sessions and strength training. Apart from this, Urfi Javed is also active in activities like Yoga and Pilates on a large scale like other actresses.

She is clearly proficient in both forms. When Urfi hits the gym, she mainly focuses on strength training. She also participates in some kickboxing sessions from time to time. Urfi also participates in various fitness boot camps from time to time. These are specialized training camps that focus on a specific area, and conduct training routines that strengthen and tone that area.

Apart from this, Urfi also takes great care of her food and drink. She follows a regular and balanced diet rule to keep herself fit. She takes special shakes that cover most of her micronutrients. She also prefers to have shakes that are natural, and she avoids pre-mixed shakes. Urfi Javed’s height is 5 feet 1 inch, which is 155 cm. Her body weight is 55 kg and Urfi’s body measurement is 34-26-34. Her eye color is Black and her hair color is Black.

Urfi was born in a middle-class Muslim family. His entire family believes in Islam. Urfi Javed’s mother’s name is Zakia Sultana and her father’s name is not known. However, Urfi now lives separately from her father in Lucknow with her two younger sisters and mother. Her father had tortured her for years, due to which she ran away with her sisters. Urfi told in an interview about the atrocities committed by his father that

“Even when my father victim-blamed me, I was not allowed to say anything, all I could do was suffer their torture, I was always told that girls don’t have a voice, that only men are allowed to make decisions. I didn’t know I had a voice, but when I left my house, it took me so long just to survive. Now, my personality is coming out and I’m not going to stop,” she added.

In another interview, she revealed how she escaped her father’s abuse by running away from home

“I then ran away from the house with my two sisters, leaving behind my mother and two other siblings, and stayed in a park for a week in Delhi. Then we three started looking for jobs. I thankfully got a job in a call center. Soon after that, my father got remarried and then the whole responsibility of the family came on to me and my sister’s shoulders.”

Apart from his mother, two younger sisters also live in Urfi’s house, whose names are Asfi Javed and Dolly Javed. Talking about Urfi’s marital status, she is still unmarried, due to which her husband’s name is not known. Apart from this, she is not dating anyone right now, due to which the name of her boyfriend could not be known.

Talking about the total net worth of Urfi Javed, then her net worth is in the range of around ₹40 lakh to ₹55 lakh. Her main source of earning is through acting in television serials. She charges around ₹25k to ₹35k per episode for each episode in TV shows. Apart from this, she also promotes some brands from her social media account for which she charges good money.

Urfi’s account is present on all social media platforms. She dominates social media due to her hotness. Javed is very active on social media. Urfi is often seen blowing the senses of the fans by uploading her photos on Instagram. Most of her photos are full of hotness in bikinis, which are very pleasing to her fans. There are thousands of fans of Urfi Javed on social media, who are seen loving and commenting on her pictures. Fans are convinced of her beauty, who do not get tired of praising her. She is very popular on social media and fans are crazy about her style.

Urfi Javed is also covered by Wikipedia on its page. She is also present on Twitter where she keeps sharing her thoughts through tweets with her over 16k followers. In the table below, we have shared the links of all her social media profiles with you, by clicking on them you will be able to access her profile page directly.

Some Interesting Facts About Urfi Javed:

This is the full details on Urfi Javed Biography, Wiki, Age, Father, Family, Parents, Husband, Boyfriend, Tv-Shows, Net Worth & More. Share this post with your friends and keep visiting us on celebwale.com for famous personalities and trending people’s biography with updated details. If you have any thoughts, experiences, or suggestions regarding this post or our website. you can feel free to share your thought with us.