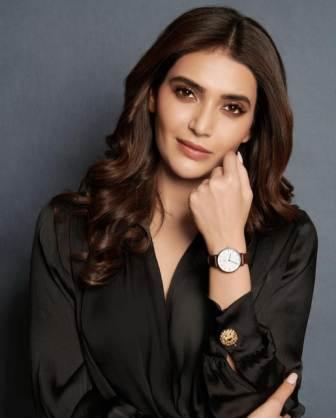 Karishma Tanna is an Indian model, television, and film actress known for working in Hindi films and television shows. She was born on 21 December 1983 in a Gujarati family in Mumbai. She grew up in a joint family. She completed her early education at Government Girls High School, Mumbai. After this, she did her graduation from Sydenham College of Commerce & Economics, Mumbai. She wanted to become a model and an actress since childhood, but the journey of coming to the acting field was not easy for her.

Karishma’s father did not want her to go into the acting field at all. But due to the support of her mother, she stepped into the acting world and became a successful actress. Her mother supported him at every turn of her life and this is the reason why Karishma is still very close to her mother. Karishma Tanna started her acting career at the age of just 17, has dreamed of becoming an actor since childhood. She started her TV career in the year 2001 by playing the role of Indira in the TV serial Kyunki Saas Bhi Kabhi Bahu Thi.

After starting her career with this famous television soap opera, she never looked back in her life and was seen giving tremendous performances in serials and films one after the other. After her debut serial, Karishma worked as a lead actress in serials like Kahi To Milenge (2002) as Tanisha, Paalkhi (2005) as Palak, Viraasat (2006) as Natasha, Jaane Pehchaane Se… Ye Ajnabbi (2010) as Avni, Sajan Re Jhooth Mat Bolo (2010) as Kiran, etc.

She played supporting characters in many TV serials such as Manshaa (2003), Kkoi Dil Mein Hai (2003), Kkusum (2004), and many more. Karishma made her Bollywood debut in the year 2005 with the Bollywood film Dosti: Friends Forever.

She also took training in cooking before participating in Bigg Boss 8. She joined the TV show Bigg Boss Halla Bol as a contestant where she was the first runner-up of the show. Apart from this, Karishma participated in the dance reality show Nach Baliye 7 as a contestant with Upen Patel where she was the second runner up of the show with him. She finished 7th in Jhalak Dikhhla Jaa 9.

In the year 2020, she participated as a contestant in Colors TV’s popular show Khatron Ke Khiladi 10 where she was the winner of the show. She has appeared in Ekta Kapoor’s popular thriller TV show Naagin 3 as Naagrani. Apart from this, she has played the role of Rani Pari in SAB TV’s popular show Baal Veer. Karishma Tanna debuted on the OTT platform by playing the character of Zoya Hussain in ALTBalaji’s web series Karrle Tu Bhi Mohabbat released in the year 2018. In 2021, she appeared in MX Player’s web series Bullets as Lolo.

Karishma Tanna’s age is 39 years old in the year 2022. She has always been famous for her hot bold look. Talking about her fitness routine, she goes to the gym daily to keep herself fit where her workouts include exercises like cardio and weight training. She does jogging and running daily to burn calories. Karishma is very excited about her fitness and keeps doing various exercises to stay fit.

Karishma has included yoga in her daily routine. By doing yoga, she remains very fit and her beauty also gets glorify her body. Due to this, her body is so flexible that she can mold her body as much as she wants. She also does Lat Pulldown Exercise in which she works on her upper back which helps her to slim down. With the help of this exercise, she strengthens her back muscles, apart from this, she also fixes the postures of her body.

Karishma also does the Rope Pressdown exercise, by which she strengthens the muscles of her upper body. With this exercise, she keeps the shape of her upper body ie breast in the right shape. Rope Pressdown is a single-joint isolation exercise that builds strength and muscular endurance through the triceps muscles. Apart from this, this exercise is very good for the shoulders, abdominal muscles, and upper back.

Apart from hard workouts, Karishma also takes special care of her diet. She is a vegetarian so her diet includes protein and low carbohydrate food. She likes to have a glass of milk and fresh fruits, upma, and idli for breakfast. Karishma takes roti-sabzi, dal, and raita for lunch. Apart from this, she likes to have vegetables, lentils, brown rice, curd, salad, and sandwiches for dinner.

Karishma Tanna’s height is 5 feet 9 inches, which is 176 cm. Her bodyweight is 58 kg and Karishma’s body measurement is 34-26-34. Her eye color is Dark brown and her hair color is Black.

Tanna was born in a middle-class Gujarati family in Mumbai. She grew up in a joint family. His family believes in Hinduism and worships Hindu deities. Karishma Tanna’s father’s name is Late Kartik Tanna who passed away in October 2012 due to heart failure. Tanna’s mother’s name is Jasmine Tanna and she is very close to her mother. Apart from her mother, Karishma has a younger sister named Grishma Kadam in her house. Talking about Tanna’s marital status, she is engaged.

According to the report, Karishma is secretly engaged with her long-time real estate businessman boyfriend Varun Bangera. But she has had an affair with many celebrities before this, including Bappa Lahiri, Hanif Halal, Rushabh Chowksi, and Upen Patel. Karishma met her ex-boyfriend Upen Patel for the first time in Bigg Boss 8. After coming out of Bigg Boss, both participated as a contestant in the dance reality show Nach Baliye 7.

In this show, Upen proposed Karishma in front of everyone on national television, which Karishma accepted and replied yes. Later both of them got engaged but even after being together for a long time, their relationship could not last long and they broke up. Apart from this, Karishma’s name has also been linked to Rushabh Chowksi and if reports are to be believed, both were also thinking about marriage but things did not work out and both had a breakup.

Karishma has also dated famous model Hanif Hilal but their relationship could not last long. This beautiful actress has not only made the acting field but also the singers crazy after her. According to sources, Karishma’s affair has also been with Bappa Lahiri, son of famous singer Bappi Lahiri.

Karishma Tanna and Varun Bangera tied the knot on 5 February 2022. Their marriage took place in a five-star hotel in Goa, in which not many guests attended due to Covid. It is believed that only family members and close friends were involved in the wedding.

Talking about the total net worth of Karishma Tanna, her net worth ranges from around ₹12 crores to ₹14 crores. Her main source of earning is from TV serials, films, and modeling. She is involved in serials and films as a lead actress from which she earns a lot. She charges around ₹80k to ₹1 lakh per episode in TV shows. Apart from this, she also endorses some brands through her social media, for which she charges up to lakhs of rupees. Tanna has also worked in a few television ads. She lives in Mumbai and lives a luxurious life and also owns a luxury car like BMW & Marcedese for a ride.

Tanna’s account is present on all social media platforms. She dominates social media due to her hotness. Tanna is very active on social media. Karishma is often seen blowing the senses of the fans by uploading her photos on Instagram. Most of her photos are full of hotness in bikinis, which are very pleasing to her fans.

There are thousands of fans of Karishma Tanna on social media, who are seen loving and commenting on her pictures. Fans are convinced of her beauty and do not get tired of praising her. She is very popular on social media and fans are crazy about her style.

Karishma Tanna is also covered by Wikipedia on its page. She is also present on Twitter where she keeps sharing her thoughts through tweets with her over 350k followers. In the table below, we have shared the links of all her social media profiles with you, by clicking on which you will be able to access her profile page directly.

In 2016 and 2018, Karishma was given the Zee Gold Awards in the Most Fit Actor (Female) category. She won the Star Parivar Awards in the year 2018 and also won The Mumbai Achievers Awards in the category of Style Diva of the Year in 2020. In the table below, we have given a list of all her awards and achievements, which you must read once.

Some Interesting Fact About Karishma Tanna:

Q. Who is Karishma Tanna?

Ans. Tanna is a famous actress, model, and anchor from Mumbai.

Q. Who is the boyfriend of Karishma Tanna?

Q. What is the age of Karishma Tanna?

Q. Where is Karishma Tanna from?

Q. Who is Karishma Tanna married to?

Q. Who are Karishma Tanna’s parents?

This is the full details on Karishma Tanna Biography, Wiki, Age, Family, Husband, Net Worth & More. Share this post with your friends and keep visiting us on celebwale.com for famous personalities and trending people’s biography with updated details. If you have any thoughts, experiences, or suggestions regarding this post or our website. you can feel free to share your thought with us.