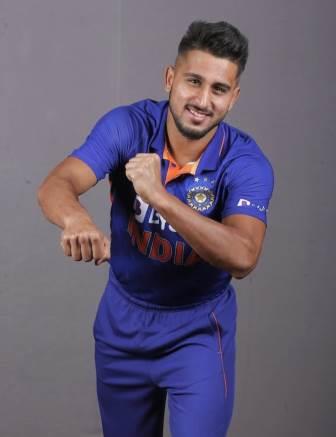 Umran Malik is an Indian fast bowler who is known for his fast bowling. He was born on 22 November 1999 in Srinagar, Jammu, and Kashmir. Umran, who was fond of playing cricket since childhood, left his studies in the tenth standard and focused on playing cricket. He used to play cricket in local tournaments held in his hometown. His family also fully supported him in playing cricket and never refused to play.

Umran used to be so engrossed in playing cricket in his childhood that he did not pay attention to the time. Sometimes, his family members had to catch him and bring him, that now there is no need to play more cricket, just eat food. After that, his name started spreading all over Jammu, and the batsmen started getting scared of playing his ball. Due to his fast bowling, people with him started calling him Ghajini.

Initially, when he was young, he used to bat, then slowly he started bowling. He was famous for his batting in domestic tournaments, he also scored a century. Later he took up the hobby of bowling. After that, he gave the trial of Under-19, after which Randhir Singh Manhas taught and trained him to play. After that, he was selected for Under 23 where he played.

Then he was selected for the Mushtaq Ali Trophy and later also played in the Vijay Hazare Trophy. He performed brilliantly in the Vijay Hazare Trophy which helped him move ahead in his career. Another cricketer from Jammu, Abdul Samad, who was playing for Sunrisers Hyderabad in IPL, told SRH’s mentor VVS Laxman about Umran’s bowling. Then he was included in the Sunrisers Hyderabad team as a net bowler.

After joining the IPL, he beat Australian star cricketer David Warner several times with his balls while bowling in the nets, which attracted the attention of the team management. He got a chance to play his IPL debut match against Kolkata Knight Riders in IPL 2021 after Sunrisers Hyderabad bowler T Natarajan became Covid-positive. In that match, he conceded 27 runs in 4 overs while bowling at 145 kmph.

Although he could not take any wickets in this debut match, but he won the hearts of people with his bowling. In 2022, he is once again in discussions with his fast bowling. He is doing brilliantly in IPL 2022 and in the match against Gujarat Titans, he took 5 wickets for 25 runs in 4 overs while bowling for Sunrisers Hyderabad which is his best performance in IPL so far.

He is the second-fastest bowler in the history of the IPL to bowl at a speed of 157 kmph. Before him, Australian fast bowler Shaun Tait bowled the ball at a speed of 157.4 kmph. His only dream is to play for India in international matches.

Ultimately, Umran Malik made his T20 debut on 26 June 2022, playing for India in international matches against Ireland. He made his ODI debut for India in the One Day International against New Zealand at the Eden Park Stadium on 25 November 2022. In his first match, he got the wicket of New Zealand batsman Devon Conway.

Apart from this, Umran holds the record for throwing the fastest ball by an Indian. He bowled the ball at a speed of 155 kmph in his 17th over (T20I) at Wankhede Stadium Mumbai while playing against Sri Lanka in January 2023. In doing so, he broke Jasprit Bumrah’s record for the fastest delivery by an Indian.

Umran Malik’s age is 23 years old in the year 2023. He is a talented and brilliant young cricketer who has buoyed the batsmen with his fast deliveries in IPL. He is a fast bowler who has the ability to bowl at a speed of 150 kmph consistently. He works very hard in the net to bowl fast. He is busy doing most of the workouts in the field as well.

Umran Malik’s height in feet is 5 feet 9 inches, which is 175 centimeters. His body weight is 74 kg and Malik’s body measurement is 42-34-14. His eye color is Black and his hair color is also Black.

Umran was born in a middle-class Muslim family in Jammu and Kashmir. His entire family believes in Islam and prays to Allah. Umran Malik’s father’s name is Abdul Rashid and he is a fruit seller. He has a vegetable and fruit shop in Jammu. Umran’s mother’s name is not known.

Umran was the youngest in the house and met him with great difficulties, so all his needs were met. Money never came in his way. Parents did what they could, even Umran’s coach Randhir Sahab never took fees.

Umran’s marital status is currently unmarried. There is no information available about his girlfriend yet.

Some Interesting Facts About Umran Malik:

Que. Who is the fastest bowler in IPL?

Ans. Australian bowler Shaun Tait bowls at the speed of 157.4 kmph in IPL

Que. Where is Imran Malik from?

This is the full details on Umran Malik (Cricketer) Biography, Age, Height, Religion, Father, Family, Wife, IPL, Net Worth & More. Share this post with your friends and keep visiting us on celebwale.com for famous personalities and trending people’s biography with updated details. If you have any thoughts, experiences, or suggestions regarding this post or our website. you can feel free to share your thought with us.