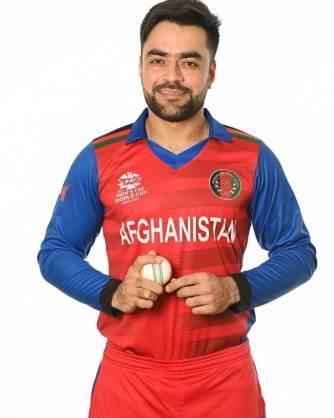 Rashid Khan is an Afghan international cricketer who has also been the former captain of Afghanistan. He is currently one of the leading all-rounders of the Afghan team. Legendary batsmen all over the world get in trouble in front of their spin bowling.

Apart from this, Rashid is part of the team Gujarat Titans in the IPL, Adelaide Strikers in the Big Bash League of Australia, Lahore Qalandars in the Pakistan Super League (PSL), and Band-e-Amir Dragons in Shpageeza Cricket League in Afghanistan. Born on 20 September 1998 in the Nangarhar province of Afghanistan, Rashid’s early years passed in the midst of bloodshed.

The war that broke out in Afghanistan in 2001 took away his childhood from Rashid. Due to the ongoing fierce conflict between the Taliban and the US, Rashid had to live in a refugee camp near the Pakistan border. When the situation improved, Rashid could return to Afghanistan. Rashid loved batting in cricket from the very beginning. He was a fan of Sachin Tendulkar, so obviously wanted to play shots like him.

But at the behest of friends, he chose to bowl instead of batting. It was not so easy to play cricket in war-torn Afghanistan, when the situation did not improve for years, he moved to Pakistan with his family. At that time in Pakistan, the name of Shaheed Afridi was echoed everywhere in cricket, his sixes were discussed all over Pakistan. Rashid was very impressed with his leg spin.

He initially played cricket with his brothers and returned to his home country when the situation in Afghanistan came under control. However, his mother was often ill, and she wanted Rashid to grow up to be a doctor. Rashid loved his mother the most, so how could he avoid talking about his mother. On his return to Afghanistan, he started his studies so that he could better treat his mother by becoming a doctor.

After passing his matriculation, he took English coaching for 6 months and after learning English he also studied English tuition for 6 months. Meanwhile, Rashid fell in love with cricket and lost his desire to become a doctor. He started taking tough cricket training.

After this Rashid joined Afghanistan Under 19 cricket where his performance was poor, after which his brother got angry with his poor performance and said that you leave cricket and focus on his studies back. After that Rashid became very disappointed and he called his mother and told the whole truth. Mother said that even if you could not succeed yesterday, don’t give up cricket.

After this Rashid never looked back, because his dream had got the support of his mother. Rashid was a fan of Pakistani all-rounder Shahid Afridi. He chose his bowling action only after seeing Afridi’s action. Rashid Khan’s hard work paid off and he was given a chance to make his ODI debut for Afghanistan against Zimbabwe on 18 October 2015.

Then on 26 October of the same year, Rashid made his T20 International debut against Zimbabwe. He made his first-class debut for Afghanistan on 7 December 2016 against England Lions in Abu Dhabi. In February 2017, IPL team Sunrisers Hyderabad bought him for ₹ 4 crores and included him in their team. On 10 March 2017, Rashid took 5 wickets in the 2nd T20 International against Ireland.

He took his 5 wickets in just 2 overs and became the first player to do so in a T20 International match. In the ODI series against Ireland, along with Paul Stirling, he became the first pair of bowlers from different teams to have played a single match. Took six wickets in the same ODI match. Rashid played his IPL debut match against Royal Challengers Bangalore on 05 April 2017.

He is playing in IPL in 2022 as Vice Captain of Gujarat Titans. Rashid Khan was bought by Gujarat Titans for ₹15 crores in IPL 2022 auction. In 2022, his new team Gujarat Titans won the IPL title by showing a great game. He was bought by the Guyana Amazon Warriors of the Caribbean Premier League for $60,000 in 2017 after getting a contract from the IPL.

In September 2017, he achieved the first hat trick in the history of the CPL, showing a great performance for Guyana. After that in July 2020, he joined the team of Barbados Trident in CPL. In September 2017, he joined the Australian Big Bash League. He was bought by the Adelaide Strikers for $5 and included in their team. With his stellar performance in the BBL, he helped his team Adelaide Strikers to win the title.

On 8 January 2020, Rashid took the fifth hat-trick of BBL history against Sydney Sixers. Rashid played his 300th T20 match in BBL on 12 January 2022. In that match, he took 6/17, which is the best figure of his T20 career and the third-best figure in the history of BBL.

Apart from this, in November 2017, he was included in the Pakistan Super League 2018 by Quetta Gladiators. After this, in the PSL 2021 edition, he was added to his team by Lahore Qalandars. In September 2018, he joined Kabul Zwanan’s squad in the Afghanistan Premier League.

Rashid was born in eastern Afghanistan to a middle-class Islamist family. His entire family believes in Islam. Rashid Khan’s parent’s name is not known. Rashid was closer to his father, and he died in 2018. His mother also died due to prolonged illness. Apart from his parents, he has a total of 10 siblings. Rashid has 6 brothers and 4 sisters. His marital status is still unmarried. Rashid’s girlfriend’s name is not known.

Rashid Khan’s total net worth is more than ₹ 35 crores. Rashid is a great international cricketer and he is a part of almost all T20 leagues around the world. He earns a lot by playing in all these leagues. He is the vice-captain of the team Gujarat Titans in the world-famous cricket league Indian Premier League. He gets ₹15 crores for playing in the Indian Premier League (IPL).

Some Interesting Facts About Rashid Khan:

This is the full details on Rashid Khan (Cricketer) Biography, Age, Height, Wife, Family, Net Worth & More. Please share this post with your friends and keep visiting us on celebwale.com for famous personalities and trending people’s biography with updated details. If you have any thoughts, experiences, or suggestions regarding this post or our website. you can feel free to share your thought with us.