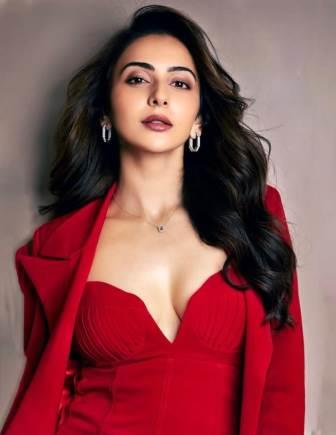 Rakul Preet Singh is an Indian model and actress who works mainly in Tamil and Telugu films apart from Hindi films. She has established herself as one of the most prominent actresses in Indian cinema in a very short period. She was born on 10 October 1990 in New Delhi. She had her early education at Army Public School located in Dhaula Kuan, Delhi. After that, she completed her graduation in Mathematics from Jesus and Mary College, University of Delhi.

While studying in college, she also started doing modeling assignments for her pocket money when she was offered a small role in the Kannada film Gilli. In 2009, she signed this film for her pocket money, she had no idea how big the South Indian film industry is. In 2011, she played the lead role of Sangeetha in the Telugu film Keratam. The film was released in Tamil as Yuvan.

She has appeared in lead roles in Bollywood movies like Aiyaary (2018), De De Pyaar De (2019), Marjaavaan (2019), Attack (2022), Runway 34 (2022), and Cuttputlli (2022). She has completed shooting for Bollywood movies like Doctor G, Thank God, and Chhatriwali which are all set to release soon. Apart from this, she is busy shooting for South Indian films like Ayalaan, Indian 2, and 31 October Ladies Night.

Rakul Preet Singh has also been embroiled in controversies in 2020. It was investigated by Narcotics Control Bureau (NCB) after the death of Bollywood actor Sushant Singh Rajput in June 2020. Leading Bollywood actresses were called for questioning by the NCB after NCB found drug involvement in Sushant’s death.

Actresses called by NCB included Deepika Padukone, Sara Ali Khan, Shraddha Kapoor, and Rakul Preet Singh. She was called for questioning based on WhatsApp chats from 2017 related to drugs. The chat was recovered from the mobile phone of talent agent Jaya Saha. Jaya had also been Sushant’s former talent manager, due to which the suspicion of the actresses related to him of taking drugs deepened even more.

Rakul Preet Singh’s age is 31 years old in 2022. She is one of the leading beautiful actresses in Indian cinema. She spends most of her time in the gym to maintain her body. Apart from this, she also does yoga and exercise so that she can stay healthy. Rakul Preet Singh’s height is 5 feet 6 inches, which is 168 cm. Her body weight is 55 kg and Rakul’s body measurement is 33-26-34. Her eye color is Brown and her hair color is Black.

Rakul was born in Delhi in a Sikh family. His entire family believes in Sikhism and worships Sikh Gurus. Rakul Preet Singh’s father’s name is Kulwinder Singh and he was an army officer. Her mother’s name is Rini Singh. She also has a younger brother in his house named Aman Preet Singh. Aman is also an actor and will soon be making his debut with the movie Ram Rajya. Her marital status is still unmarried. Although she is in a relationship with Bollywood actor and producer Jackky Bhagnani since 2021.

Rakul Preet Singh’s total net worth is more than ₹50 crores. She has created property worth crores in a short period. She charges a fee of more than ₹2 crores for a film. Apart from this, she earns most of her earnings from brand endorsements and ad campaigns. She earns more than ₹50 lakhs every month from brands and ads. She has a huge bungalow of 16 thousand square feet in the Jubilee Hills area of ​​​​Hyderabad. Apart from this, she also has houses worth crores in Mumbai and Visakhapatnam.

Apart from all this, Rakul is also the owner of the F45 Gym franchise which she runs along with her brother Aman Preet in Hyderabad and Visakhapatnam. Rakul also has a collection of luxury cars like Mercedes Benz GLE, Range Rover Sports, and BMW5 series 520D which are worth crores. Last year, she along with his brother Aman also started Starring You, an online application-based startup that helps newcomers to audition in the industry.

This is the full details of Rakul Preet Singh Biography, Age, Height, Husband, Family, Net Worth & More. Please share this post with your friends and keep visiting us on celebwale.com for famous personalities and trending people’s biography with updated details. If you have any thoughts, experiences, or suggestions regarding this post or our website. you can feel free to share your thought with us.