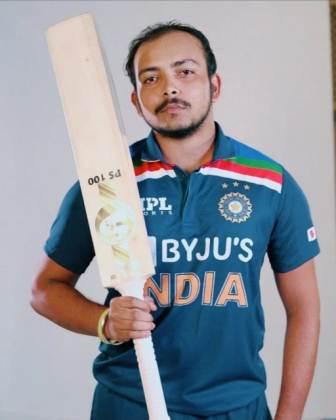 Prithvi Shaw is an Indian international cricketer who plays for Mumbai in domestic cricket and Delhi Capitals in the Indian Premier League. His full name is Prithvi Pankaj Shaw. He is a right-handed batsman. Prithvi was born on November 9, 1999, in Thane, Maharashtra, India in a Bihari family. Prithvi Shaw’s hometown is Gaya, Bihar.

His family moved to Thane, Maharashtra in search of employment. In 2001, AAP entertainment offered a contract to Shaw that let his family shift to Mumbai from Thane where he continued his study and cricketing education. He completed his schooling at A.V.S. Vidyamandir, Virar, Mumbai, and Rizvi Springfield High School, Mumbai.

Subsequently, he finished his college degree from Rizvi College of Arts, Science & Commerce, Mumbai. His father got him enrolled in a cricket academy in Virar, Mumbai when he was just 3 years of age. In that academy, he learned all kinds of cricketing skills under the proper guidance of coaches.

In 2013, he came into the limelight when he played for Rizvi Springfield High School in the Harris Shield Cricket Tournament where he ended up scoring 546 runs in just 330 balls in an inning. He has also been a part of the Under-14, Under-16, and Under-19 Mumbai cricket teams.

He made his first-class debut in January 2017 when he played for Mumbai against Tamil Nadu in the Ranji Trophy tournament at Rajkot, Gujarat. Shaw made his debut at Vijay Hazare Trophy in the same year(2017) which took place in Chennai, Tamil Nadu. He captained the Indian Under-19 cricket team in the 2018 Under-19 Cricket World Cup.

On October 4, 2018, Shaw made his test debut against West Indies where he hit his maiden test century and became the youngest batsman to score a century in a debut match. He made his One Day International debut for India against New Zealand on February 5, 2020.

Prithvi Shaw’s age is just 22 years old in the year 2022. He is one of the youngest players on the Indian team. He is a flamboyant opener as well as a brilliant fielder who saves many useful runs for the team thanks to his brilliant fielding on the field. The secret of his tremendous fielding in the field is his fitness.

He pays a lot of attention to his fitness and spends most of his day practicing in the nets or working out in the gym. Ever since BCCI stipulated that it is necessary to pass the Yo-Yo fitness test to play in Team India, all the players have become very conscious about their fitness and do a lot of workouts to stay fit.

The BCCI has clearly stated that if any player fails to clear the Yo-Yo fitness test, he cannot play for India. For this, Prithvi works very hard to keep himself fit. He likes to eat nutritious things in his food, and along with this he also consumes fruits regularly.

Prithvi Shaw’s height in feet is 5 feet 6 inches, which is 168 centimeters. His bodyweight is 65 kg and Prithvi’s body measurement is 38-30-12. His eye color is Black and his hair color is also Black.

Prithvi was born in a very poor Hindu family. His entire family worships Hindu deities and also believes in Hinduism. Prithvi Shaw’s father’s name is Pankaj Shaw, a petty cloth merchant, and his mother’s name is not known. In the year 2003, when Prithvi was just 4 years old, his mother died. Apart from his father, there are no siblings in his house.

Prithvi Shaw’s family is originally from Gaya in Bihar, although now in 2021 his family has become completely Maharashtrian. Many years ago, in search of livelihood, his father had settled in Maharashtra from Gaya. Prithvi was born in Virar, Maharashtra. From the age of three, father Pankaj had developed an interest and love for cricket in Prithvi’s heart and mind.

When he was just 3 years old, his father enrolled him in the Cricket Academy of Virar. When Prithvi turned 4 years old, the lap of his mother’s love was snatched from him. Then his father used to do clothing business. After the death of his wife, the challenge of raising a son had come in front of him. On this, Pankaj also stalled his business for some time.

Along with looking after the son at home, the father used to support him in his cricket practice. As a child, Prithvi used to play cricket with his friends and father Pankaj at the beach near JW Marriott where his father used to bowl for him. At the age of 11, when Prithvi got an offer of cooperation from a company, his family settled in Mumbai from Virar.

Prithvi made his first-class debut for Mumbai against Tamil Nadu in January 2017. He won the man of the match title in his very first Ranji match. They also participated in Vijay Hazare Trophy. In the same year, he also became the captain of the Under-19 cricket team. India also won the Under-19 World Cup on 3 February under the captaincy of Prithvi Shaw.

After this, he got a chance to play a Test match for the Indian team against West Indies in the year 2018. He made history by scoring a century against West Indies in his debut Test match. Now he has become the first Indian batsman to score a century in his debut Test at a very young age. If today Prithvi Shaw has emerged as the youngest star of cricket, then his father has the biggest role in it.

Prithvi Shaw himself has expressed this thing on social media. He expressed the importance of a father in his life by putting a picture on Father’s Day. According to Prithvi, “The biggest gift my father gave me was his trust in me”.

Talking about the marital status of Prithvi Shaw, he is unmarried. If rumors are to be believed, the name of his so-called girlfriend is Prachi Singh who is a television actress. The rumored relationship between Prachi Singh and Prithvi Shaw first came into the limelight last year when Prachi commented on a picture shared on Instagram by the 2018 ICC Under-19 World Cup-winning captain Prithvi Shaw.

Even in the year 2021, when Prithvi Shaw played a brilliant inning against Sri Lanka in Colombo to give India a lead in the five-match series, his alleged girlfriend actress Prachi Singh also reacted after the game. Prachi had shared a story on Instagram praising his rumor. The first image of the story featured Shaw’s figures from the match and commentary, which read, “The best”.

Apart from this, Shaw loves to play games on PlayStation. He also likes to watch TV and he likes to watch the TV comedy serial Taarak Mehta Ka Ooltah Chashmah in his free time. In the table below, we have given a list of all his favorite things, which you must read once.

Talking about the total net worth of Prithvi Shaw, his net worth is around ₹15 crore. He has earned a lot of names in his short cricketing career. Prithvi Shaw may have got the Test, ODI, and T20 caps but so far he has not been included in the contract list of BCCI. Let us tell you that BCCI has divided its cricketers into 4 categories which include A+, A, B, and C categories.

A player in the A+ category is given the highest annual salary of ₹7 crores by the BCCI. Whereas the players included in A, B, and C categories are given by the BCCI as an annual salary of ₹5 crores, ₹3 crores, and ₹1 crore respectively. Shaw is given ₹35k per match for playing cricket for his domestic team Mumbai and apart from this he also gets ₹10k per day.

Prithvi had signed a deal with MRF even before going to the Under-19 World Cup, under which he got crores of rupees. Apart from this, he has tied up with many big companies like SG, Protinex, BharatPe, Nike, and Boat.

Prithvi Shaw’s account is present on all social media platforms where he keeps sharing his latest photos and posts with his fans. He has a verified account on Instagram where he has more than 1.1 million followers and the number of his posts is more than 200. He is also present on Facebook where his account has been verified by Facebook which will help his followers to connect with him.

He is followed by about 2 million followers on Facebook. Apart from this, Wikipedia has also covered them on its page. He is also present on Twitter where he has more than 500k followers. In the table below, we have shared the links of all his social media profiles with you, by clicking on them you will be able to directly access his profile page.

Some Interesting Facts About Prithvi Shaw:

This is the full details of Prithvi Shaw Biography, Age, Height, Caste, Family, Girlfriend, Stats, IPL, Net Worth & More. Share this post with your friends and keep visiting us on celebwale.com for famous personalities and trending people’s biography with updated details. If you have any thoughts, experiences, or suggestions regarding this post or our website. you can feel free to share your thought with us.