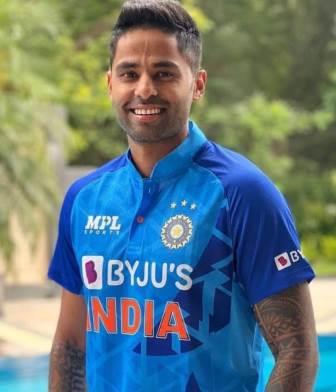 Suryakumar Yadav is an Indian international cricketer who represents Mumbai in domestic cricket and plays for Mumbai Indians in the Indian Premier League. He is a right-handed batsman and bowls occasionally. He is a right-arm off-break bowler. Yadav was born on September 14, 1990, in Mumbai, Maharashtra, India. His interest in cricket came into his life in childhood.

Apart from cricket, he loved to play badminton as well. His father moved from Varanasi to Mumbai for his job as an electrical engineer at Bhabha Atomic Research Center. Initially, Yadav learned his skills in the street of Mumbai. His father observed his passion for cricket in the very beginning. Thereafter, his father got him enrolled in a sports academy in the BARC colony in Chembur.

In that academy, Yadav learned the advanced skills of cricket under the proper guidance of coaches. Later on, he went to Elf Vengsarkar Academy. He finished his school education at Atomic Energy Central School, Mumbai. Afterward, he completed his Intermediate from Atomic Energy Junior College, Mumbai, and later he completed a B.Com from Pillai College of Arts, Commerce, and Science, Mumbai.

Suryakumar Yadav made his first-class debut in the 2010-11 Ranji Trophy for Mumbai against Delhi. In October 2017, he was selected in India C’s squad for the 2018-19 Deodhar Trophy. He was the captain of the Mumbai cricket team in the 2020-21 Syed Mushtaq Ali Trophy. He was bought by Mumbai Indians in the fifth edition of IPL in 2012. In that season, he played only one match and could not perform well.

He was dismissed without scoring a single run. Kolkata Knight Riders showed trust in him and purchased him in the 2014 IPL auction. This time, he grabbed the opportunity with both hands and hit the winning knock of 46 runs in just 20 balls against Mumbai Indians in one of the matches of IPL at Eden Gardens. He played many matches for KKR. In 2018, he was again bought by Mumbai Indians for ₹3.2 crores.

Since then, Suryakumar Yadav has been playing for Mumbai Indians. On March 14, 2021, he made his T20 international debut against England. In that series, he got the opportunity to bat in the fourth match where he hit the first ball for six and became the first Indian to do so in T20 international cricket.

He made his One Day International debut on July 18, 2021, against Sri Lanka. In July 2021, he was called as a replacement to India’s squad for the test series against England.

Let us tell you that before joining Team India, all the players have to give a yoyo fitness test. The one who passes this test is given a place on the team. Similarly, Suryakumar has also made it to the team after passing his Yoyo fitness test. To maintain his fitness, he practices for hours in the gym every day, apart from practicing for hours on the field.

He is very conscious about his fitness and keeps on consuming energy drinks and gourd juice from time to time so that his stamina can remain intact for hours. Suryakumar Yadav’s height in feet is 5 feet 11 inches, which is 180 centimeters. His body weight is 75 kg and Yadav’s body measurement is 42-32-14. His eye color is Black and his hair color is also Black.

Suryakumar was born into a prosperous Hindu Yadav family in Mumbai. His entire family worships Hindu deities and believes in Hinduism. Suryakumar Yadav’s father’s name is Ashok Kumar Yadav and he is working as an Electrical Engineer at Bhabha Atomic Research Center (BARC). Her mother’s name is Swapna Yadav and she is a housewife.

Suryakumar’s family is originally from Banaras, Uttar Pradesh but years ago his father joined Bhabha Atomic Research Center in Mumbai as an engineer. Due to this, he shifted to Mumbai along with his wife. Apart from his parents, there is also a younger sister named Dinal Yadav.

Talking about Yadav’s marital status, he is married. In the year 2016, he married his girlfriend Devisha Shetty. Suryakumar’s wife’s name is Devisha Kumar Yadav and she is a dance coach. Suryakumar is yet to have any son or daughter from his wife.

Talking about the total net worth of Suryakumar Yadav, his net worth ranges from around ₹20 crores to ₹25 crores. He has many luxury vehicles like BMW 5 Series car, Tata Fortuner, Skoda Superb, Audi A6, and Range Rover in his garage. Apart from this, he is very fond of riding bikes and he has luxury sportbikes like Harley Davidson and BMW.

He is also fond of wearing jewelry, whose wardrobe has many expensive chains, wearing which he has been seen many times. Let us tell you that Suryakumar was first bought by Mumbai Indians in IPL 2012 for just ₹10 lakh. But that year, he did not get a chance to perform in the presence of players like Sachin Tendulkar, and Rohit Sharma.

In 2014, Suryakumar was bought by the IPL team Kolkata Knight Riders for ₹70 lakh rupees by betting on him. After this, he also got a chance to play in Kolkata’s playing XI and surprised everyone with his excellent batting, and helped his team win the IPL title for the second time in 2014. He was a member of the KKR team for almost 4 years. Playing against Mumbai, he played a flamboyant 46 in a match that included 5 sixes.

Seeing this innings of Suryakumar, Mumbai Indians again included him in the team in 2018. Where he is currently the main batsman of the Mumbai team, which is taking an annual fee of ₹3.2 crores. At the same time, Suryakumar’s total earnings from IPL so far have exceeded ₹12.7 crores. Apart from this, he is also the brand ambassador of the Indian sports fantasy app Free Hit. He also endorses many brands during IPL, from which he earns millions.

Suryakumar Yadav’s account is present on all social media platforms, know he keeps sharing his latest photos and videos of cricket with his friends. He is also present on Instagram where he has more than 1.8 million followers and his number of posts is more than 800. He is not available on Facebook. Wikipedia has also covered Suryakumar on its page.

Apart from this, he is also present on Twitter where his account is bluetick verified by Twitter and has more than 756k followers. In the table below, we have shared with you the links of all their social media profiles, by clicking on which you will be able to directly access their profile page.

Some Interesting Facts About Suryakumar Yadav:

This is the full details of Suryakumar Yadav Biography, Age, Height, Father, Family, Wife, Child, Net Worth & More. Please share this post with your friends and keep visiting us on celebwale.com for famous personalities and trending people’s biography with updated details. If you have any thoughts, experiences, or suggestions regarding this post or our website. You can feel free to share your thought with us.