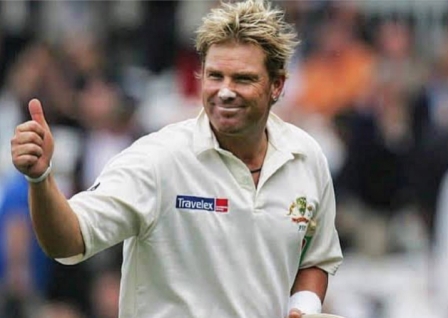 Shane Warne was a legendary Australian cricketer, who was famous all over the world for his leg spin. She was born on 13 September 1969 in Upper Ferntree Gully, Victoria, Australia. Warne’s full name was Shane Keith Warne. He completed his childhood schooling from class 7 to class 9 at Hampton High School. After that, he joined Menton Grammar School through a sports scholarship.

Warne was very interested in cricket during his college studies and used to participate in many college tournaments. He first came into the limelight when he represented the University of Melbourne Cricket Club in the Victorian Cricket Association Under 16 Dowling Shield competition in 1983-84. Warne joined his home St Kilda Cricket Club the following season.

After struggling a lot in that tournament, he somehow managed to take his place in the playing XI. Later, after Warne was ousted by St Kilda, he started focusing solely on cricket. He was then selected to train at the Australian Cricket Academy in Adelaide in the year 1990. He joined the Accrington Cricket Club of the Lancashire League in 1991 as a professional player.

He had a good season as a bowler after his initial struggle at this cricket club, taking 73 wickets and scoring 329 runs. He made his first-class debut on 15 February 1991, playing for Victoria against Western Australia. After this, he was selected for the Australia B team. On Australia B’s tour of Zimbabwe, Warne made his first first-class record of taking 5 wickets or more in an innings.

He played just seven first-class matches before making his debut for the Australian Test team. He made his Test debut in January 1992 while playing against India. However, this series proved to be bad for him and could get only 1 wicket for a total of 228 runs. In 1993, Warne was selected in the Australian team for the Ashes tour of England. His first ball in the series was inscribed in the history books as Ball of the Century.

He took the wicket of veteran England batsman Mike Gatting on the very first ball of the series. Warne to Mike Gatting was too much outside the leg side but after the fall, the ball turned a lot and dislodged Gatting’s middle stump. He played a total of 145 Test matches for Australia and has taken 708 wickets in his career. Apart from this, he also played 193 ODI matches for Australia where he took 294 wickets.

He also captained Australia in 10 ODIs, in which they had to face defeat in just one match. He had established his dominance in Test matches all over the world and many legendary batsmen were afraid to come in front of his bowling but his record against India has not been good. He especially used to scare Indian batsman Sachin Tendulkar from bowling.

Once he had a dream that Sachin Tendulkar was beating his bowling fiercely, since then his bowling average against Sachin was not good. His bowling average against India is 47.18 runs per wicket while his overall average is 25. Warne retired from ODI cricket after the 2003 World Cup. After retiring from international cricket, Warne was signed as the captain of Rajasthan Royals in the 2008 Indian Premier League.

He was bought by the Rajasthan team for $450000. He led Rajasthan Royals as the winner of the IPL in the first season of the competition, after which he remained as the captain for the next 4 seasons but the 2011 season was his last season with the franchise.

Australia’s Shane Warne, one of the world’s greatest spinners, has passed away. He was 52 years old. According to Fox Sports News, Warne was in Koh Samui, Thailand. It is believed that he had suffered a heart attack. According to a statement issued by Warne’s management team, Shane was found unconscious at a villa in Koh Samui.

Later they could not be saved. Shane Warne, who made the ball dance on his fingers in his 19-year international career, recently expressed his desire to become the head coach of the England cricket team. But now due to his sudden departure, there is a wave of mourning in the sports world.

Shane Warne’s age was 52 years old in the year 2022 at the time of his death, he was a legend leg spinner of Australia’s team, who on the basis of his excellent performance helped Australia to win the many test series on many occasions. Apart from being a great bowler, he was also a good fielder who take many catches in slip.

He was a sports person and he believe to kept his body fit. To keep his body healthy and fit, he also pays special attention to his diet and takes only nutritious things in food. Apart from this, he also consumes fruit juices so that he can stay healthy.

Shane Warne’s height in feet is 6 feet 0 inches, which is 183 centimeters. His bodyweight is 74 kg and Warne’s body measurement is 40-30-13. His eye color is Black and his hair color is Blonde.

Shane Warne was born in a Christian family, his entire family believes in the Christian religion and also prays in the church. Shane Warne’s father’s name was Keith Warne and his mother’s name was Bridget Warne. He also has a brother named Jason Warne.

Talking about Warne’s marital status, he is divorced. He married his girlfriend Simone Callahan in the year 1995, after which Simone gave birth to 2 daughters Brooke Warne and Summer Warne, and 1 son Jackson Warne. He was divorced by his wife Simone Callahan in 2005 due to a rift with Warne.

Talking about Shane Warne’s total net worth, his net worth was around $50 million dollars i.e. ₹385 crores. He was known to lead a royal life. He also had a villa in Thailand where he was staying. Apart from this, many luxury vehicles were also present with him.

Some Interesting Facts About Shane Warne:

This is the full details on Shane Warne Age, Wife, Children, Death, Family, Biography, Net Worth & More. Please share this post with your friends and keep visiting us on celebwale.com for famous personalities and trending people’s biography with updated details. If you have any thoughts, experiences, or suggestions regarding this post or our website. you can feel free to share your thought with us.