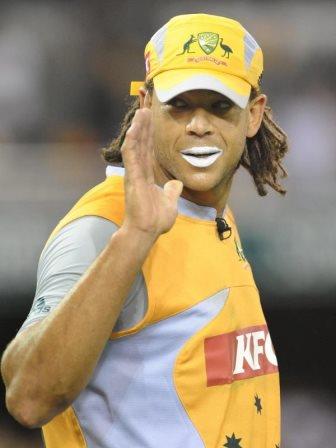 Andrew Symonds was a former Australian international cricketer best known for playing as a batting all-rounder in all three formats. He was born on 9 June 1975 in Birmingham, England. Symonds and her sister were adopted by their parents, Ken and Barbara when they were only 3 months old. His early childhood was spent at Chartres Tower in Queensland. Symonds’ father was a cricket fan and he used to help him play cricket before and after school.

After that, he fell in love with cricket and started playing cricket in childhood, which his father helped him. He began playing cricket for the Wanderers Club in Junior Cricket Townsville. He completed his early education at All Saints Anglican School located in Gold Coast, Queensland. Initially, Symonds played for four English counties Gloucestershire, Kent, Lancashire, and Surrey during his career. Being born in England, he was originally eligible to play for England.

But in 1995 he decided that he wanted to make an international career for Australia instead of England because of his allegiance to Australia. Symonds played his first international match against Pakistan in November 1998. He did not get a chance to bat in this ODI match. At the same time, he was given 2 overs to bowl. In this, he could not take wickets. After this, Symonds was run out after scoring 8 runs in the second ODI of his career. But his bat ran in the third match.

He scored an unbeaten 68. Symonds got his first ODI wicket in the third match. In this match played against India, he gave 25 runs in 7 overs. He played the last ODI of his career against Pakistan in May 2009. Symonds’ Test career did not last long. He played his debut test match against Sri Lanka in March 2004. He was dismissed for zero in the first innings of this match. While scored 24 runs in the second innings. He got a wicket in the first innings of this match.

Symonds last played a Test match against South Africa in December 2008. If we look at Symonds’s overall career, he has been impressive. He has scored 5088 runs in 198 ODI matches. During this, he has also taken 133 wickets. While 1462 runs have been scored in 26 test matches. Symonds has taken 24 wickets in Test matches.

He has had a strong performance in domestic matches. Symonds has scored 11099 runs in 424 matches of List A. While 14477 runs have been scored in 376 innings of first-class matches. He has taken 282 wickets in List A and 242 wickets in First-Class matches.

Apart from cricket, Symonds also felt very attached to India. This was the reason why he did a cameo in the Indian Bollywood film Patiala House and took part in the 2011 Indian reality show Bigg Boss as a contestant. Another contestant in Bigg Boss, Pooja Mishra, acted as a translator for him. He also used to come often to visit India.

Talking about the achievements in the career of Andrew Symonds, for his excellent performance in the year 2003, he was selected for the World Cup. Andrew Symonds was also a member of the Australian team in the 2007 World Cup. IPL 2008 Symonds became the second most expensive player in the IPL auction to be bought by Deccan Chargers for $1,350,000.

Symonds represented Deccan Chargers for three seasons. He was bought by Mumbai Indians for $850,000 in 2011 and included in their team. Symonds played his last IPL match for Mumbai Indians in 2011.

Former Australian legend Andrew Symonds died in a car accident on Saturday, 14 May 2022, about 50 km from Townsville, Queensland. He was driving his car alone, police confirmed that he was alone in the car. After his death, all the big personalities of world cricket expressed grief.

Andrew Symonds was 46 years old at the time of his death in 2022. He was a former brilliant fielder in the cricket world. He was the 5th player to run out the batsmen for the most number of times in One Day International cricket. He was an agile fielder of tall stature whose throw was very accurate.

Andrew Symonds’s height in feet is 6 feet 2 inches, which is 187 centimeters. His bodyweight is 85 kg and Symonds’s body measurement is 44-32-14. His eye color is Light Grey and his hair color is Spindle.

Symonds was born in an upper-middle-class family in England. His entire family believes in the Christian religion. No information exists about Symonds’ biological parents. He and his sister Louis were adopted by their parents Ken and Barbara when they were 3 months old. He later shifted to Australia with his parents. His parents were of African Caribbean background.

Symonds also has a younger sister named Louis Symonds. Lewis is an actress who participated in the 2008 Australian TV series Gladiators as a contestant. His marital status was married. Symonds’ wife’s name is Laura Vidmar and they also have 2 children. His son’s name is Clow and his daughter’s name is Billy.

Talking about the total net worth of Andrew Symonds, his net worth is around ₹40 crores ($ 5 million). His main source of income was cricket. He earned big money through domestic matches as well as World Cup and IPL. He used to earn about $40k every month. His annual earnings were a total of $5 million.

Some Interesting Facts About Andrew Symonds:

This is the full details of Andrew Symonds Biography, Age, Height, Father, Family, Wife, Child, Career, Net Worth & More. Please share this post with your friends and keep visiting us on celebwale.com for famous personalities and trending people’s biography with updated details. If you have any thoughts, experiences, or suggestions regarding this post or our website. you can feel free to share your thought with us.