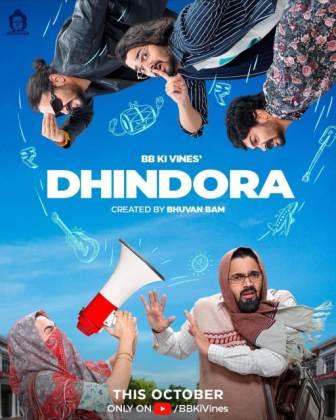 Dhindora is a Hindi web series that is going to release on YouTube on 14 October 2021. Dhindora Pitna meaning is to say a little thing around or spread something in your locality. This web series is based on a family drama in which YouTube star Bhuvan Bam is seen in the lead role.

Bhuvan has played multiple roles in this web series. He has not only played his role, but he is also playing the character of mother, father, friend, and brother.

In the story of Dhindora, Bhuvan Bam’s father Bablu Ji is fired from his job due to some reason. He was dependent on his job for the livelihood of himself and his family. During that time, after being fired from the job, he buys a lottery ticket and gets a lottery of ₹11 crores.

After the lottery, no one knows that Bablu Ji has won the lottery of ₹11 crores. But Bhuvan’s mother Janki taunts her entire locality that she has won a lottery worth ₹11 crores. After that, Bhuvan’s father Bablu Ji’s car meets with an accident where he is taken to the hospital.

However, during treatment in the hospital, he does not survive and he dies. After the death of his father, Bhuvan and his friends set out on a mission to find their father’s killer. Now it will be very interesting to see what happens next, for this, you will have to watch the entire web series.

This is the first season of the Dhindora web series which has 8 episodes. We are giving the names of the eight episodes below.

The eight episodes of the web series have been written by Bhuvan Bam and directed by Himank Gaur. The series is produced under the banner of BB Ki Vines Production Company, produced by Rohit Raj.

This is the latest information on Dhindora Series Cast, Story, Wiki, BB Ki Vines Web Series, Character, Real Name, Role Name, Release Date, Episodes & More. Share this post with your friends and keep visiting us on celebwale.com for famous personalities and trending people’s biography with updated details. If you have any thoughts, experiences, or suggestions regarding this post or our website. you can feel free to share your thought with us.