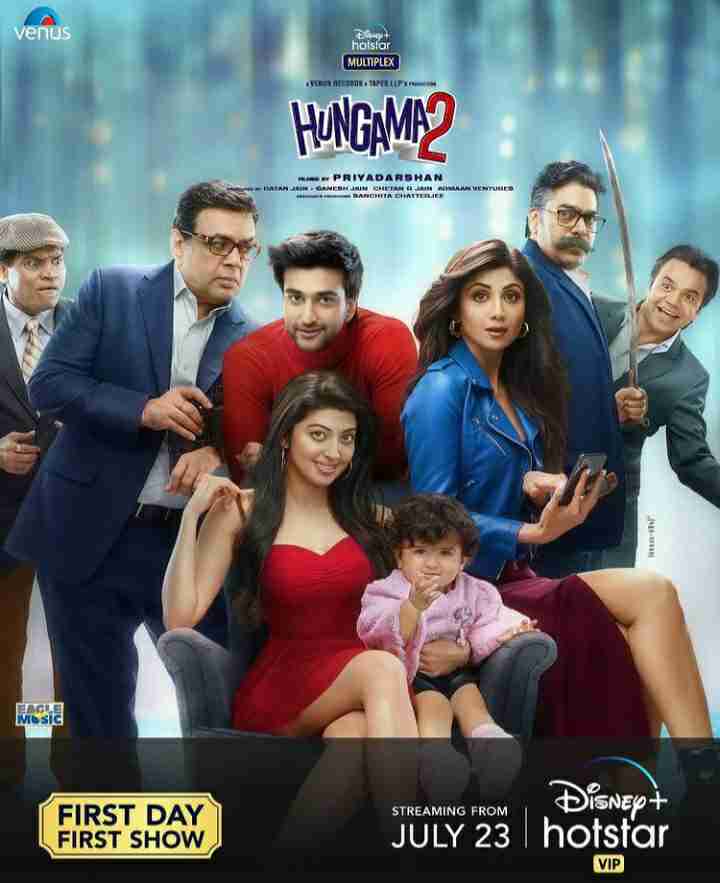 Hungama 2 is the sequel to the famous Bollywood comedy film Hungama which was released in the year 2003. It is also a remake of his own 1994 Malayalam film Minnaram. The sequel of this film is being released after 18 years on Disney + Hotstar.

The movie Hungama 2 has a great cast like Shilpa Shetty, Paresh Rawal, Meezaan Jaffrey, Ashutosh Rana, and Pranita. The film will release on 23rd July on the OTT platform Disney Hotstar Plus with a double dose of comedy.

Now the trailer of this film has been released. You will get to see unlimited fun, comedy, and confusion in this film. In the trailer, you will see that this film is the story of two families.

One is the Tiwari’s, consisting of a beautiful wife and jealous husband, and the other is the Kapoor family, consisting of a retired colonel, and his two sons. Confusion arises when suddenly a girl brings the child to the door of Tiwari’s house and says that it is their boy’s.

Looking at the trailer of the film, it seems that the best temper of comedy has been added to the film, which will make you laugh with laughter. Many famous personalities have worked in the film.

Shilpa Shetty is playing the role of Anjali Tiwari in this film, while Paresh Rawal plays the role of Radhe Shyam Tiwari. Apart from this, Meezaan Jaffrey plays Paresh Rawal’s son in the film, who is claimed to be the father of the child.

Apart from this, Pranitha Subhash is going to debut in Bollywood. She has been very active in the South Film Industry before this. Apart from all this, veteran actors like Rajpal Yadav, Johnny Lever, and Ashutosh Rana have put a great temper of comedy in the film.

“When I heard the script of Hungama 2 for the first time, I could not stop laughing. I always wanted to work with the pair of Paresh Rawal and Priyadarshan. The two have always created magic on the screen together. I was also very happy to join hands with Ratan Ji. Hungama 2 will always be special for me as I am returning to the industry after 12 years with this film. Also on the OTT platform. I am stepping into this too. Audiences love comedy and me too. I am glad that I did this film, people are going to love this family comedy.”

This is the latest information on Hungama 2 Wiki, Release Date, Disney+Hotstar, IMDb Rating, Sequel, Star Cast, Movie Review, Malayali Film Remake, Trailer & More. Share this post with your friends and keep visiting us on celebwale.com for famous personalities and trending people’s biography with updated details. If you have any thoughts, experiences, or suggestions regarding this post or our website. you can feel free to share your thought with us.