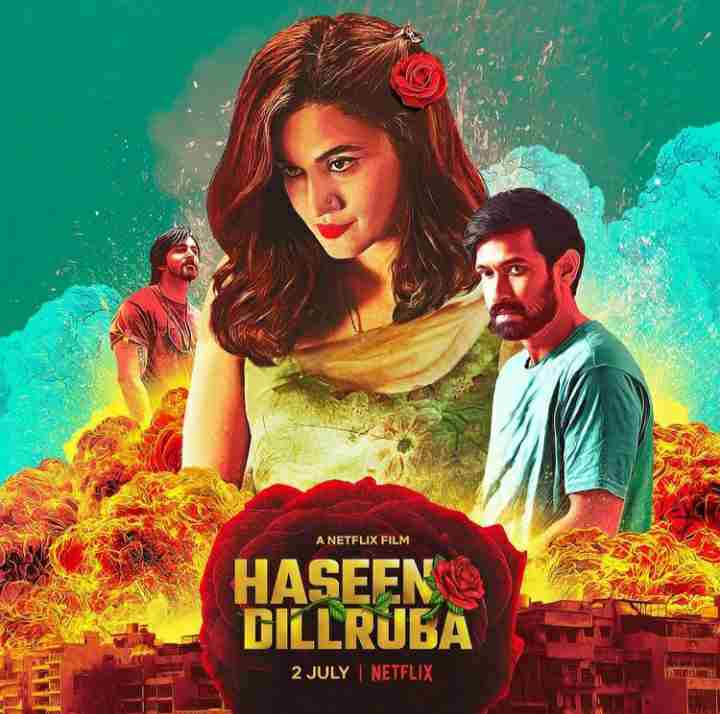 Today, we talk about the film Haseen Dillruba. In this film, you will see Tapsee Pannu, Vikrant Messy & Harshvardhan Rane in the lead roles.

Apart from all this, Aditya Srivastav, Ashish Verma, and Yamini Das will also be seen in the lead roles.

The film is mostly based on the crime, suspense, romance, & thriller genre. Earlier the film was decided to release on 18 September but due to covid, the film was postponed. So, the new release date of the film is 02 July 2021, Friday on OTT Platform Netflix.

The trailer of the film ‘Haseen Dillruba’ in Taapsee Pannu’s very soft voice begins, ‘Have you read Dinesh Pandit’s book? In small towns, we don’t know how big or big murders happen.” And, then begins the story of a real “Hindi Heartland” celebrating Indian pulp literature.

The picture is yet to come and it is only the trailer but the writer Kanika Dhillon and director Vinil Mathew together have woven the warp according to the trailer, Taapsee Pannu has pulled a very long streak with her performance.

The name of the film is on the character of Taapsee and this character is based on the novels of Dinesh Pandit, a writer like Surendra Mohan Pathak, Ved Prakash Sharma, Keshav Pandit.

The film ‘Haseen Dillruba’ is the story of a woman whose heart is stuck in novels, her mind has wandered in many places and she is shocked to come under the charge of murder of her husband.

Like the stories she was reading on the pages of novels till yesterday, she herself has become a part of a story. The clever policeman is just waiting to get the evidence, he intends to rot this woman in jail for the rest of her life.

But, there is another angle to the story. She also says, ‘Every story has many aspects, the only difference is who is telling the story.’

This aspect of the story of the film ‘Haseen Dillruba’ is its third character Harsh Vardhan Rane. After the film ‘Taish’, Harshvardhan’s name has joined the first line stars of Hindi cinema.

There is the third surprise in every other scene and by the time the fourth comes, it seems that brother should come quickly on July 2 and watch this film on Netflix.

Taapsee Pannu herself tells that she was not the first choice for this character of the film ‘Haseen Dillruba’. There are some aspects of Taapsee’s personality that most of the world is unaware of.

On my return from America to India after the IIFA Awards, I also saw some of his colors, which I was also waiting for a long time to turn into a film character. Taapsee’s attitude is similar in ‘Haseen Dillruba’. Chill and blowing a front fuse.

But, as I wrote before, the real curtain of ‘Haseen Dilliruba’ is a Harshvardhan Rane. The director of the film has received this big opportunity to improve his mistakes.

Anand L Rai had earlier made ‘Manmagas’ about Tapasi Pannu and Anurag Kashyap on the story of Kanika Dhillon.

This time, he has banned the story of Kanika, Anurag, Vikas Bahal, Vikramaditya Mota, ‘Laughed’ has been held on Vincal. According to the trailer the stake is perfect.

In the trailer, Tapasi Pannu is actually a heroine from the crime story of Dinesh Pandit and his hanging shocks are such that the film also seems to be in the theater.

This is the latest information on Haseen Dillruba Movie, Starcast, Story, IMDB, Review, New Release Date, Trailer, Netflix, Collection & More. Share this post with your friends and keep visiting us on celebwale.com for famous personalities and trending people’s biography with updated details. If you have any thoughts, experiences, or suggestions regarding this post or our website. you can feel free to share your thought with us.