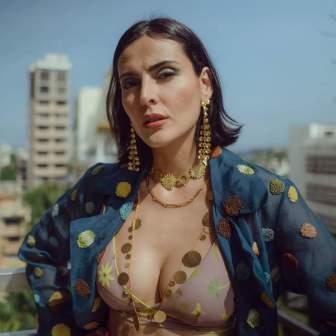 Mandana Karimi is an Iranian model and actress known for working in the Indian television industry. She was born on 19 May 1988 in Tehran, Iran but her roots are linked to India. His father is an Indian who had settled in Iran due to his business. She grew up in Tehran, the capital of Iran, and received her early education from there.

She was a very quiet and shy girl in her childhood and mostly spent time doing arts in her room. Karimi started her career as an air hostess after completing her graduation, later she left her job to pursue modeling. While modeling, she worked on many international modeling projects. After working on various international modeling projects in 2010, she came to Mumbai, India for 3 months in connection with a modeling contract.

Sharing her experience of coming to India in an interview, she said that

“I had a different experience, staying without my family. I absolutely loved it! Work was great, but at that time, I had other contracts around the world. Then, in 2013, I decided to move to Mumbai and try acting.”

In 2013, she shifted to Mumbai to try her luck in the field of acting and after some struggles, she made her Bollywood debut by playing the character of Anita in the 2015 film Roy. In the same year 2015, she played the role of Rachel D’Costa in the Bollywood movie Bhaag Johnny and Liz in Main Aur Charles.

In the following year 2016, she played the role of Shalu in the Bollywood movie Kyaa Kool Hain Hum 3. Starting her career in the Hindi television industry in 2015, Karimi participated in Colors TV’s popular show Bigg Boss 9 as a contestant. Showing a great game in the show, she made her place in the finale of the show where she was declared the second runner-up of Bigg Boss 9.

Mandana Karimi’s age is 34 years in the year 2022. She is a Beautiful Iranian Model who has worked predominantly in Bollywood. She is very focused on her fitness and works out in the gym for hours to keep herself fit.

Apart from his parents, she has two brothers in her house. One brother is older than him and the other brother is younger than him. Mandana’s marital status is divorced. She married Indian businessman Gaurav Gupta, her longtime boyfriend, in 2017.

But only a few months after the marriage, Mandana filed a police complaint against her husband Gaurav Gupta alleging domestic violence. She later withdrew the case and separated from her husband.

The total net worth of Mandana Karimi is around ₹2 crores. Her main source of income is as an actor. Apart from this, she earns good money by endorsing various advertisements. Karimi has more than 1 million followers on her Instagram account where she promotes some brands for which she charges thousands of rupees. Mandana charges around ₹70k per episode.

Some Interesting Facts About Mandana Karimi:

Que. Who is Mandana Karimi’s Husband?

Ans. Mandana married to her long time boyfriend Gaurav Gupta in 2017 and after just 3 months she filed a complain of domestic violence against his husband.

Ans. Karimi was born in Tehran, Iran to an Indian father and an Iranian mother and also has a nationality of Iran.

This is the full details on Mandana Karimi Biography, Age, Family, Husband, Marriage, Net Worth & More. Share this post with your friends and keep visiting us on celebwale.com for famous personalities and trending people’s biography with updated details. If you have any thoughts, experiences, or suggestions regarding this post or our website. you can feel free to share your thought with us.