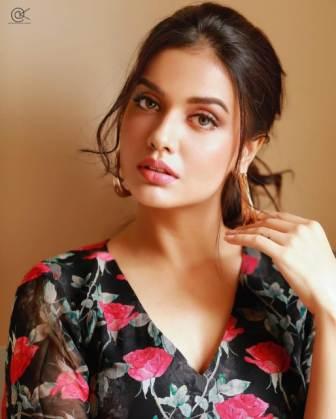 Divya Agarwal is a beautiful Indian television actress, model, and dancer who is best known as a contestant on MTV Splitsvilla X. She was born on 4 December 1992 in Navi Mumbai, Maharashtra. She received her early education at St. Xavier’s High School. Then she joined Sanpada College of Commerce & Technology College where she completed her graduation with a Bachelor of Mass Communication.

She then went to Dubai for her further studies where she earned a master’s degree in Journalism from the Canadian University. Desiring to make a career in dance and acting since childhood, Divya also started taking dance training from Terence Lewis Dance Academy during her college studies.

After this, she emerged as a very good dancer and choreographed many actresses such as Ileana D’Cruz, Sunny Leone, and Shilpa Shetty. Apart from this, she also choreographed IPL 2010 in collaboration with a Pakistani choreographer in the year 2010. She is a very beautiful actress who participated in many beauty pageants contests before joining the TV industry.

For the first time in 2015, Divya participated in the Miss Navi Mumbai beauty contest where she was the winner of this contest. In the year 2016, Divya also won the Indian Princess Pageant crown. Apart from this, she was also the winner of the Miss Tourism India title.

She was in the limelight after winning three consecutive beauty contests within a year, due to which she got an offer to participate in MTV’s show MTV Splitsvilla X for the first time as a contestant. Accepting this offer, she started her television career in the year 2017 with the MTV show MTV Splitsvilla X. She left behind her other contestants in the show to reach the finals where she became the runner-up of the show.

During the show, she met another contestant Priyank Sharma whom she gave her heart to and the two also started dating each other. In the same year, when Priyank participated as a contestant in Bigg Boss 11, Divya also reached the set of the show to support him.

Earlier, she hosted an episode of another MTV show On Road With Roadies in association with Splitsvilla X contestant Bashir Ali. The following year in February 2019, she made a cameo appearance in the Alt Balaji drama web series Punchch Beat. In the same year, she played the lead character of Ragini in ALTBalaji’s horror web series Ragini MMS: Returns Season 2.

In March 2019, she participated in Roadies: Real Heroes with her current boyfriend Varun Sood, which was aired on Voot. Later, both of them participated in MTV’s show MTV Ace of Space together. After this show, both of them confessed to their affair and said that they are dating each other.

Divya Agarwal was also ranked sixth in the list of Top 20 Most Desirable Women on Indian Television 2019 by the prestigious newspaper Times of India. In the following year 2020, the Times of India placed him at the nineteenth place on the same list.

In the year 2021, she has participated as a contestant in the most popular TV show Bigg Boss OTT, which is being broadcast for the first time on the ott platform Voot.

In this show, it is seen giving a tough competition to other contestants with great strength. Bigg Boss is being telecast for the first time on the Voot platform before being aired on TV, which is being hosted by renowned Bollywood director Karan Johar. In 2022, she also worked in the Zee5 web series Abhay season 3.

Divya Agarwal’s age is 29 years old in the year 2022. She is a very hot and beautiful actress who has won many beauty competition shows with her beauty. Her hot figure compels people to become crazy about her. The secret to her beauty is to wake up early in the morning and do yoga and meditation.

Apart from this, she keeps doing various exercises in the gym for hours every day to maintain her figure. She likes to eat nutritious food which makes her body look healthy and beautiful. She also consumes fresh fruit juices so that her body remains protected from various diseases.

Divya was born in a prosperous Hindu family. Her entire family believes in Hinduism and also worships Hindu deities. Divya Agarwal’s father’s name was Late Sanjay Agarwal who is a lawyer who died in the year 2020 due to Covid-19 complication and her mother’s name is Rosy Agarwal. Apart from her mother, a younger brother lives in Divya house, whose name is Prince Agarwal.

Talking about her marital status, she is still unmarried. The news of Divya’s first affair came when she participated in MTV’s show MTV Splitsvilla X, where she met actor Priyank Sharma, who was another contestant on the show. It was during the show itself that Divya and Priyank came very close to each other and started dating each other.

However, their relationship did not last long and in the following year 2017 when Priyank participated in Bigg Boss 11, he became close to other contestants of the show. After this Divya separated herself from Priyank. After this, in the year 2018, Divya met former Roadies contestant Varun Sood.

Then the two worked together in Roadies Real Heroes and MTV Ace of Space where both came very close to each other. Later, Divya and Varun accepted their relationship by admitting that they were dating each other. It is reported that Divya and Varun may soon tie the knot. Divya has also become very familiar with her parents in her boyfriend Varun Sood’s house. Every day she keeps sharing photos with Varun’s family on her Instagram page.

Talking about Divya Agarwal’s total net worth, her net worth ranges from around ₹7 crores to around ₹10 crores. She is a famous hot actress in the TV world who is earning good money working in TV shows. She charges around ₹1 lakh per episode.

Apart from this, she has also worked in many videos in which she earns well by working. She also earns decent money by promoting brands through her Instagram account.

This year she is participating in Bigg Boss Voot in which according to sources she is charging around ₹2 to ₹3 lakh per episode. She is known to lead a luxurious lifestyle. She also has some expensive cars but we could not get the information about them.

Divya Agarwal’s account is present on all social media platforms where she keeps sharing her latest and personal photos and video clips. She is present on Instagram where she has more than 2.6 million followers and her number of posts is more than 1.7k. She is also present on Facebook where her account is blue ticked.

About 1.3 million people follow him on Facebook. Divya is known for sharing her hot photos on social media. Her pictures are quite spectacular and look very attractive in appearance. Divya has also been covered by Wikipedia on its page.

Apart from this, she also has an account on Twitter where she keeps sharing her views with her followers. Divya has more than 27k followers on her Twitter account. In the table below, we have shared the links of all their social media profiles with you, by clicking on which you will be able to access their profile page directly.

Some Interesting Facts About Divya Agarwal:

Que: How old is Divya Agarwal?

Que: What is Divya Agarwal’s height?

This is the full details on Divya Agarwal Biography, Birthday, Age, Height, Father, Family, Husband, Net Worth & More. Share this post with your friends and keep visiting us on celebwale.com for famous personalities and trending people’s biography with updated details. If you have any thoughts, experiences, or suggestions regarding this post or our website. you can feel free to share your thought with us.