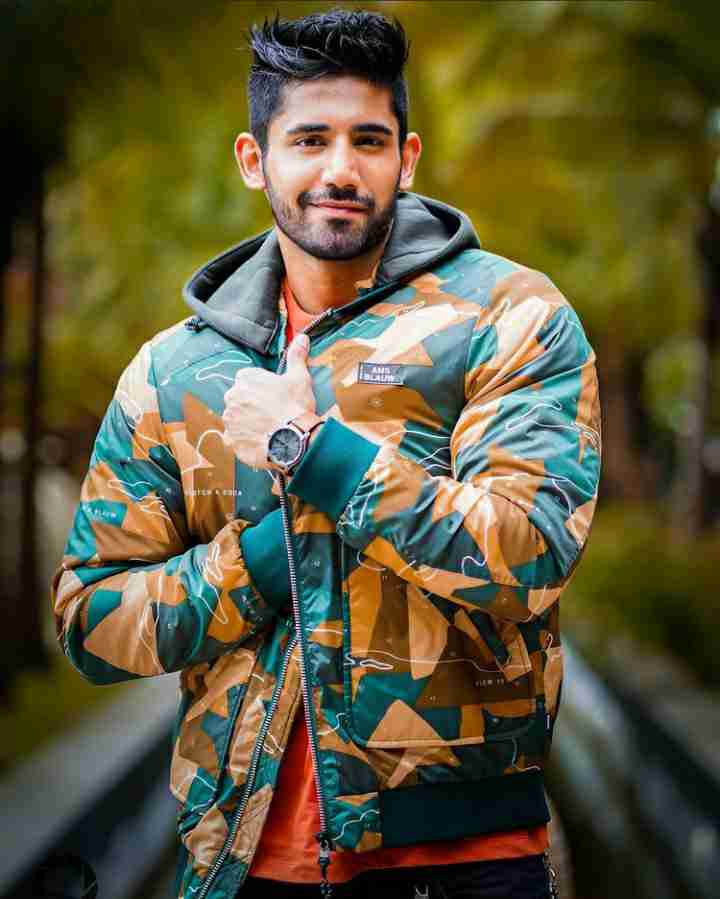 Varun Sood, the Indian model, was born on 1 April 1995 in Kolkata, West Bengal. His father is a Brigadier in the Indian Army. Being the son of an Army Personnel, he had to study in various Army Schools of India. Since childhood, he wanted to join the Indian Army. During his school days, he was fond of playing Basketball. He has played Basketball on the National level as well. He finished his schooling at Army Public School, Dhaula Kuan, New Delhi.

In a bid to pursue higher education, he took admission to Sri Venkateswara College, Delhi University, New Delhi in B. Com and graduated from there. In order to pursue a career in acting, he moved to Mumbai after finishing his education. For the first time, he appeared on TV in MTV Roadies X2 in 2015 where he was eliminated in Episode 20. By the time he got eliminated, he had gained immense popularity. Due to being popular, he got the role in a web series Squadrann which was released in 2015 on YouTube.

Varun participated in another reality show MTV Splitsvilla Season 9 in 2016 where he emerged as the first runner-up. Thereafter, he got the opportunity to host a TV show NBA Slam along with Ranvijay Singh. Subsequently, the tv show MTV Campus Diaries was hosted by Varun in 2017. He has also appeared in some TV shows like Troll Police and Ace of Space. Sood played the role of Daljeet Brar in MTV India’s TV show MTV Big F Season 2 in 2017. He played the role of Rahul in Ekta Kapoor’s OTT platform web series Ragini MMS Returns released in 2019.

In 2021, Varun Sood is participating in the popular show Khatron Ke Khiladi to be aired on Colors TV, he has gone to Cape Town to shoot for this show. Apart from him, many more famous television actors and actresses like Rahul Vaidya, Anushka Sen, Mehak Chahal, Vishal Aditya Singh, Abhimanyu Shukla, Divyanka Tripathi Dahiya, Shweta Tripathi are participating in this show. The show is being hosted by Bollywood action director Rohit Shetty.

Varun Sood’s age is 27 years old in 2022, he is the tallest artist in the TV industry whose height is very tall. He has also been an athlete and has also been a basketball player at the national level. His physical appearance is tremendous.

Sood works hard on his body and does hours of workouts in the gym. His 6 feet 4-inch height and hour workouts make him look quite impressive. To maintain his body, he also resorts to yoga in addition to workouts in the gym. Apart from this, Varun also takes special care of his food and drink. Apart from being a foodie, he also eats a lot of nutritious things, due to which his body looks very fit and healthy.

Varun Sood’s height is 6 feet 4 inches, which is equal to 193 centimeters. His body weight is about 88 kg, he takes a proper diet to keep his body fit so that his body measurement is 44-34-16. His eye color is brown, and his hair color is Black.

Varun Sood was born in a prosperous Indian Hindu family. His entire family believes in Hinduism and believes in Hindu beliefs as well as worships Hindu gods and goddesses. Varun Sood’s father’s name is Vineet Sood, who is working as a brigadier in the Indian Army. His grandfather was also an officer in the Indian Army. Varun’s mother’s name is Anjali Sood, a jewelry designer. Apart from his parents, there are also two twin sisters in the house, named Vedika Sood and Akshitha Sood. Varun’s marital status is still unmarried but his affair was earlier with actress Benafsha Soonawalla.

At one time both were considered to be one of the hottest couples in the TV industry, who were followed by millions. But this relationship did not last long and the two parted ways. Let us tell you that when Benafsha Soonawalla participated in Bigg Boss TV, her closeness with actor Priyank Sharma increased. Both spent one night in the same bed which was also shown to the viewers through television. Varun Sood, who was Benafsha’s boyfriend at that time, had appealed to the TV viewers not to vote for Benafsha so that she would come out of the show and come to her.

But Priyank’s girlfriend Divya Agarwal had a breakup with him after seeing all this. Later Varun also ended his relationship with Benafsha. After this, both of them never spoke openly about this, due to which no one knew why their beautiful relationship ended. A few weeks ago, Benafsha Sunawala revealed this truth to everyone through a social media post and told them that due to Varun Sood, she had to take a decision to separate. Benafsha Soonawalla even wrote in her long post that Varun Sood was not honest in the relationship and was cheating.

Divya Aggarwal and Benafsha Soonawalla were once good friends and they also did a Punjabi song called ‘Bob Marle’ together which became a huge hit. Both of them showed very bold moves in this song. Varun met Divya for the first time during Vikas Gupta’s reality show ‘Ace of Space’ and lost his heart, after which both are dating each other. Now soon both of them are going to marry each other. Divya is very close to Varun’s family. Varun is currently shooting for the Colors TV show Khatron Ke Khiladi in Cape Town.

Talking about Varun Sood’s favorite things, his favorite actors are Ranbir Kapoor, Robert Downey Jr., and Hugh Jackman. His favorite TV show is Friends. He has been a former national level player of basketball, due to which his hobbies are also playing basketball and doing gym. His favorite athletes are Michael Jordan and Usain Bolt. In the table below, we have kept a list of all their favorite things that you must read once.

Talking about the net worth of Varun Sood, his total earnings range from ₹1 crore to ₹3 crores. Acting is the main source of his earnings. They charge around ₹40k to ₹60k per TV episode. Apart from this, he also earns good money by promoting the products of various brands on his social media pages.

In 2021, Varun Sood took part in the Colors Tv much-awaited show Fear Factor: Khatron Ke Khiladi Season 11. In this show, he has been charging ₹3.83 lac per episode as a fee. Earlier, the shooting of the show has been completed in Capetown and telecasted soon on Colors Tv and Voot Select app.

Varun Sood’s account is present on all social media platforms, where he keeps sharing his latest photos and videos with his fans and followers. He is present on Instagram where he has more than 1.4 million followers and his number of posts is more than 1k.

Varun is also present on Facebook and Twitter where he has more than 5.7 million followers on Facebook and more than 76.7k followers on Twitter. Varun is not covered by Wikipedia yet. In the table below, we have shared with you the links of all their social media platforms, on which you will be able to directly access their profile page by clicking on it.

Some Interesting Facts About Varun Sood:

This is the full details on Varun Sood (VJ) Biography, Age, Height, Father, Family, Wife, Net Worth & More. Please share this post with your friends and keep visiting us on celebwale.com for famous personalities and trending people’s biography with updated details. If you have any thoughts, experiences, or suggestions regarding this post or our website. you can feel free to share your thought with us.