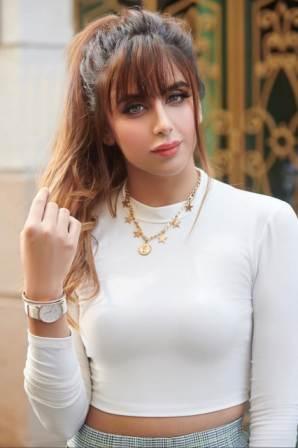 Miesha Iyer is an Indian model and television actress known for the MTV shows Splitsvilla and Ace of Space. She was born on 5 April 1994 in Mumbai, Maharashtra. She did her high school education at Mary Immaculate Girls High School in Mumbai. After passing his 10th and 12th exams, she took admission to Amity University, Mumbai.

From where she obtained her graduation degree. After graduation, Miesha got an opportunity to work with some of the top fashion designers in the industry, where her style was highly appreciated. She first established herself as a model in the fashion industry and then turned to the TV industry after achieving tremendous success in modeling.

In her modeling career, Miesha participated in many beauty pageant contests. After coming to TV, she made her debut in the TV industry for the first time in the year 2018 with MTV’s show Ace of Space. Although she worked as an actor in 2017 in a web series Hadh produced by Vikram Bhatt which was released on YouTube.

Misha Iyer’s age is 28 years old in the year 2022. She is quite popular on social media for her glamorous look. To maintain it, she regularly resorts to exercise and yoga.

Misha Iyer was born in a prosperous Hindu family. Her entire family recognizes Hinduism and also worshiped Hindu Goddess. Miesha Iyer’s father’s name is not known but he is a businessman. Miesha Iyer’s mother’s name is Sakshi Iyer and she works in the fashion industry.

Apart from her parents, she also has a younger sister but her name is not known. Miesha’s marital status is just unmarried. The news of their affair is also present on the internet media. First of all, her name was associated with Pratik Sehajpal when she participated in MTV’s Show Ace of Space.

However, during the show, both of them had a quarrel but later this quarrel turned into a friendship. After this, the news was also revealed to date each other. But this relationship could last for a few days and after a few days, both of them were separated.

In the MTV Show Splitsvilla, her friendship started with Ashish Bhatia during the show. Later, this friendship turned into love and both had dated each other for a few days.

Now she is participating in Big Boss 15 in 2021, where she met her EX-boyfriend Pratik Sehjpal. Pratik is the first confirmed contestant of Big Boss 15, now it will be interesting to see how both each other face.

Talking about the total net worth of Miesha Iyer, her Net Worth is around ₹3 crores to ₹5 crores. The main earnings of Miesha have to act in TV shows. Apart from this, she keeps sharing sponsors from her social media account for which she takes good money. This year, she is also participating in Big Boss 15, for which she is charging up to about ₹1 lakh per episode.

Talk about her favorite things of Miesha Iyer, his favorite actor Ranbir Kapoor and Salman Khan, and her favorite actress Alia Bhatt. They like to dance and model in their spare time. Apart from this, she likes to watch cricket and likes to walk in Thailand, Maldives, Dubai, and Ladakh during the holidays. In the bottom table, we have given a list of all their favorite things which you must read once.

Misha Iyer’s account is present on all social media platforms where she shares her latest photos with fans. She is widely followed on social media due to her styling tips and fashion style. She is very active on her Instagram account where she is followed by more than 750k people.

She is not covered by Wikipedia and has only 217 followers on her Twitter account. In the table below, we have shared the links of all their social media profiles with you, by clicking on which you will be able to access their profile page directly.

Some Interesting Facts About Miesha Iyer:

This is the full details on Miesha Iyer Biography, Age, Height, Parents, Father, Family, Boyfriend, Surgery, Tv-Shows, Net Worth & More. Share this post with your friends and keep visiting us on celebwale.com for famous personalities and trending people’s biography with updated details. If you have any thoughts, experiences, or suggestions regarding this post or our website. you can feel free to share your thought with us.